The Slow Build Up to the Sydney Beet Harvest Has Begun

We took a last drive in the afternoon the day before we pulled out of the North Unit of Theodore Roosevelt National Park. There's only an up and back road there, so if you're going to see more than that you've got to put your boots on the ground...

It's purt near as pretty a country as the south unit... I just failed to capture any pics of it that caught my imagination.

So... the next morning we loaded up, hitched up and rattled our worn old rig on down the road to Sydney.

They put us up at the fairgrounds just on the edge of town. We've got electric hookup and a tangle of splitters and hoses to supply water... and a pump truck comes every two or three days, so effectively full hookups.

Yesterday was the first time in I don't know how many years that I remembered we HAVE an air conditioner! Took me near a half hour to figure out how to turn the sucker on. ;) and... find the circuit breaker that was stopping it from doin' its coolin'! Yup... it was Warm in Montana!

Ten billion acres of northern plains... but folks still pack things together as soon as you put up a city limits sign... must be a human need for companionship... that I lack :-/ 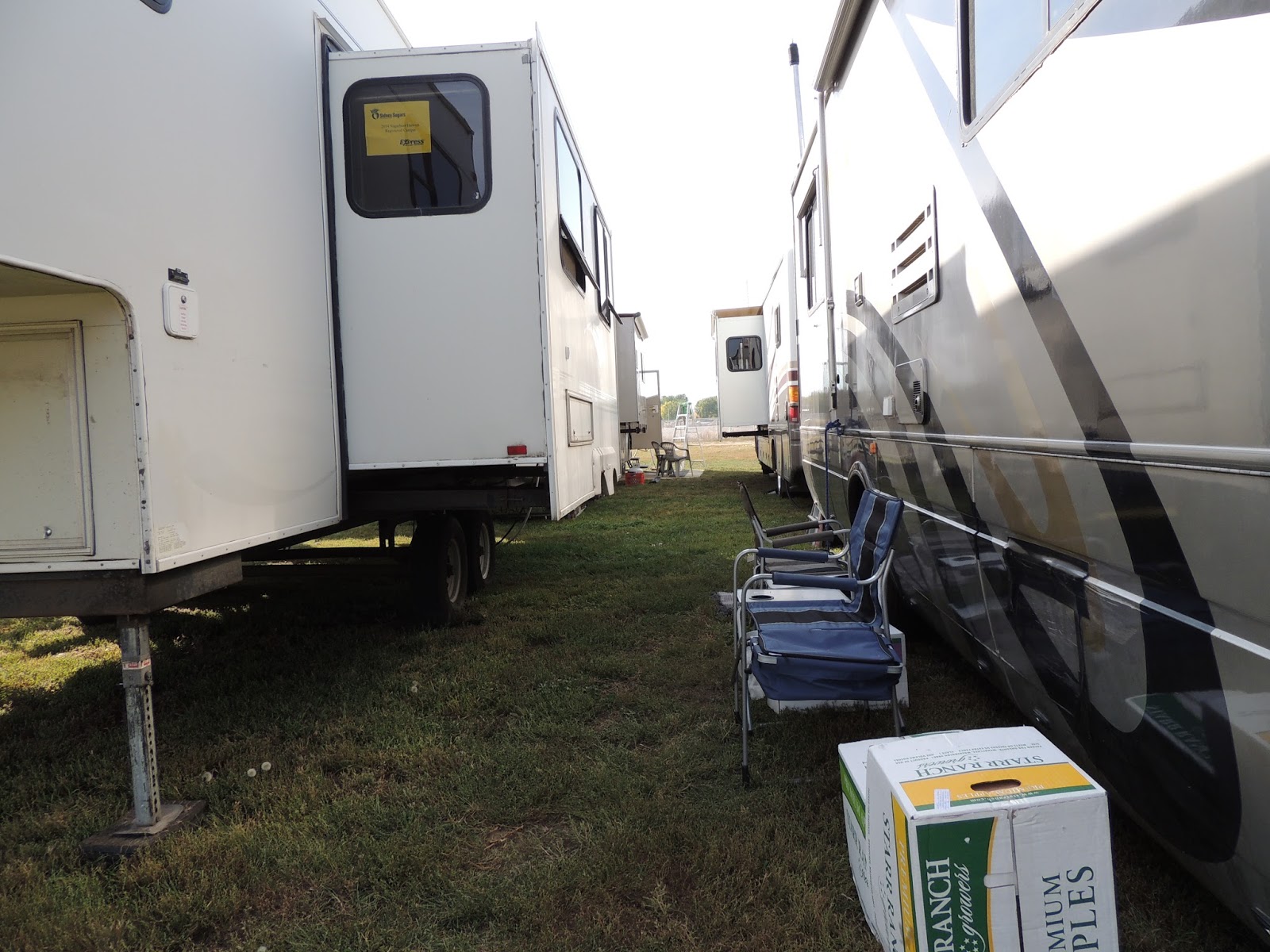 Don't plan on putting out your awning in this workers resort... of course... wind isn't much of a problem. Buuuut... you'd be advised, in consideration of your neighbors... don't eat a lot of beans!

The first week we don't pile any beets... and only work the nights at the Quality Lab. That's where the sugar content of each fields beets is calculated - which is how the farmer gets paid for his crop.

During the first week we only work the lab, and are receiving the samples from what are called "test beets"... university experimental fields I believe...The actual harvest won't begin for a few days.

This is where I spend my evenings... scrambling around this scale and dump station. The beet samples come to me down the line in one of those green tubs you see on the overhead trolley.

I shove the tub onto the scale behind that yellow rail on the left... enter the weight into the computer console in the cabinet... pull the empty tub out of the dump which is that blue railed area at the end of the line... push the full tub onto the dump... hang the empty tub back on the over head trolley... and put the weight/sample ticket from the full tub into a clip on that white belt you see going through the wall on the right hand side...

When that ticket gets to the right position hit a button on that grey box just to the right of the white ticket belt, which dumps the sample beets to be cut for the sample...

Then, turn back to repeat for the next full tub... 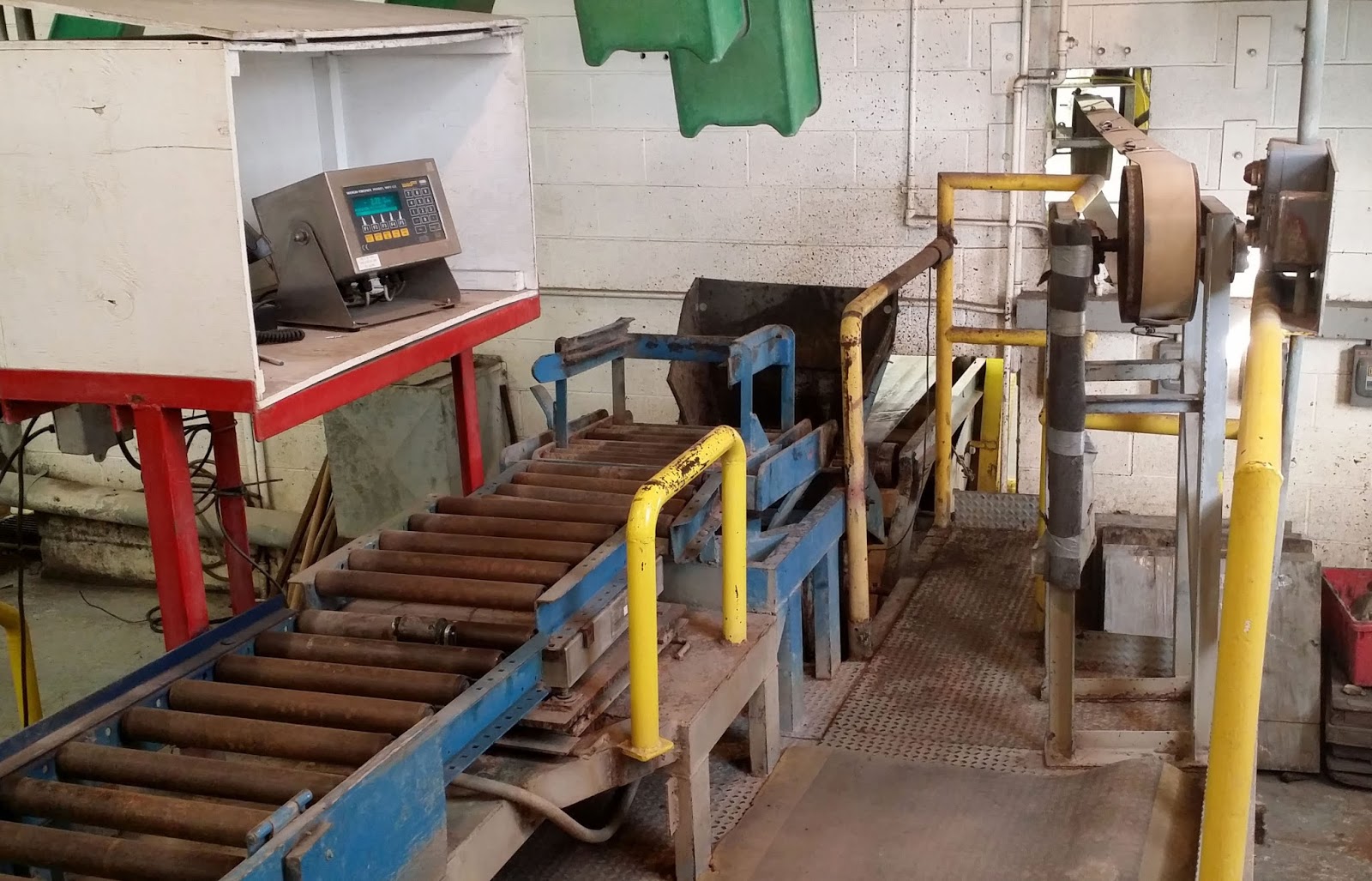 Looking back up the line, just as we're getting ready for the evenings festivities... There's two scale lines. One below each row of tubs on the trolley. 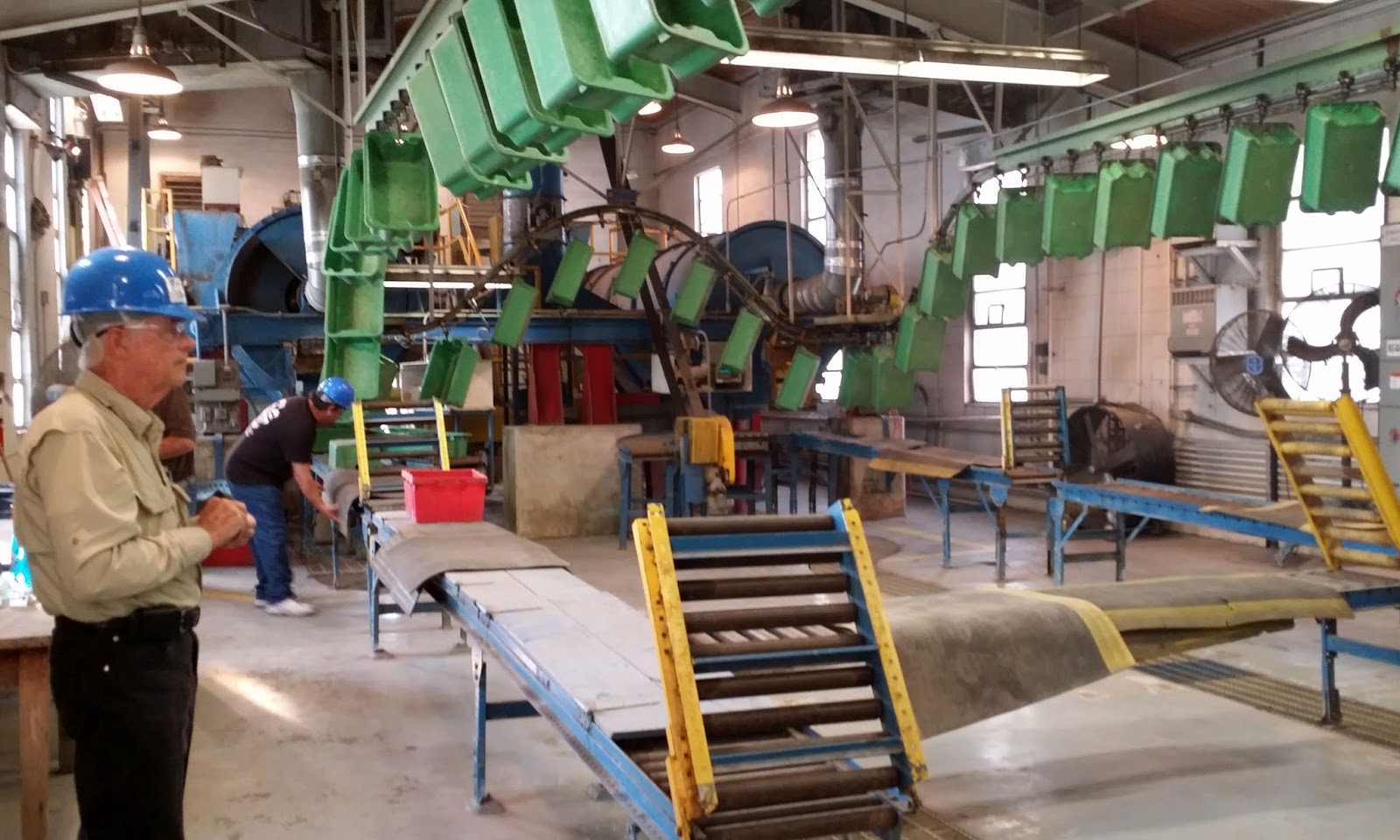 When things really get flowing in about a week... that routine I do that I layed out above gets done every few seconds for about four hours... unless... which happens often, there's a problem with a ticket, the computer, a blown air hose or such...

Come Monday or Tuesday we'll start piling beets on the Pile Grounds here at the receiving station here in Sydney... and we'll go from our four hour easy evenings to 8 hours on the pile yard and then our four hours in the evenings... and hopefully, weather permitting... get the job done in a month.

Today, I'm off to Williston to stock up on a few grocery needs. Once the big push starts there's little time if any for supply runs.

Never knew anything about the beet harvest, so I'm learning. Don't often comment, but I enjoy your posts.

We sure hope Montana provides you with some better weather this time!

Janna and Mike; Aw... Montana and Wyoming are pretty much the same with me... you expect a lil' bit of weather in the summer time :) and I'm usually flown south by winter... so... Whatever Montana has for me is good... because just the Name... Montana... has a sound that soothes an Old Busters soul :)and the vision... miles upon miles of air that ain't yet been breathed... keeps me tickin'

Furry Gnome... The Beet Harvest... produces the GOOD sugar! :) A lot of what we pile up here goes to Hershey I think :) a lil moderation and you're good... and none of the toxic side affects of that fake crap :-)

Good luck with this year's harvest. Hope that weather lets you get 'er done in good order and you can be back on your way.