Rolled East and South... and Landed North of Tucson

Did a bit more socializin' before we pulled out of the Plomosa Road camp. A long time reader, Bob Tucker, had been huntin' around for us a bit and happened to spot us sneakin' back to camp one afternoon... He's not the first to say my non-typical way of hauling a big motorcycle stands out a bit and gave me away... so he rolled in to say How Do!

Anyhoo... after our weeks in La Paz county, we pretty much wore out our welcome so we Hitched up and hauled out a couple of days early... Had to dump anyway! ;) Aw what can I say... the hitch was itchin' so we just rolled on down to Tucson two days early.

Heidi can do a lil' preppin' for her week of Bead Buying for the store... and I can get a jump on my Motorcycle Tire work.

We almost had to Wally Dock it though. We chose to make a reservation this year in Catalina State Park on the NW side of the Santa Catalina Mountains by Tucson, but that's not till the first.  Didn't expect a problem... But was a good thing I didn't dawdle more than usual comin' down here. We called yesterday to see if there'd be a problem comin' in a couple days early. They told us that they'd filled, but we shouldn't have any problem finding a spot in the Overflow parking... They hadn't been filling that...

Well... Uh... we grabbed one of the last three spots when we got here at two thirty! :) and the other Spot Fillers were bumpin' up behind us.

And guess who we found already parked here when we pulled in? The Artful Bloggers! ;) I thought they were trampin' around up in the Superstitions...

But nope... they snuck down here a day or two ago... Shared a camp with 'em in Anacortes... and cross tire tracks again in Arizona fifteen hundred or so miles and several months later...

I was filling the water tank from a hose bibb 'fore we pulled into place... so Heidi carried a cone to "Save" our spot from all them Others ;) When she came back she says; "I think Mark and Bobbie are here!"

"Why would you think that? They're north... in the Superstitions."

"There's a Chalet parked up there. There can't be too many of those around are there?"

I ask the Host if he has the name of the people draggin' the Chalet... since the truck wasn't around... He looks at his list and says; "Some folks out of Colorado... the Johnsons!"

Well I'll be Dinged! If we'd held off till our reservation... or who knows what else could have bumped things a lil' bit this way... or a lil' bit that... All these thousands of miles... and the trails intersect at just that right moment... :)

Along with all us Gypsies there's a bit of a Saguaro Forest around here... Now, considering that they say one of these buggers has to be a hundred years old to sprout its first arm... what'cha figger that makes these two old timers?

They darn sure ain't youngsters... and there's plenty more comin' along... 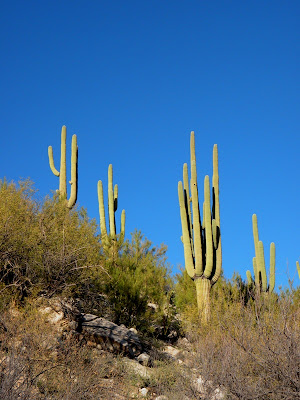 With a lil' bit of luck we'll find some time in amongst the Beads and Bikes for some decent hikes while we're here. This state park sits up against a Wilderness area, and they've been workin' for a long time to build up the Desert Bighorn population in these mountains. Would be nice to capture some pics of 'em here... since they eluded me this year out by Bouse. 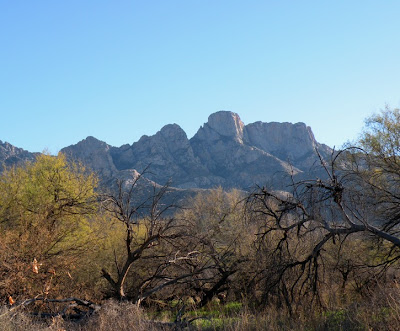 But... at least a couple days are pretty much dedicated to taking care of the rubber on the Scooter!

... Guess I'd better drag myself off to my bunk... ifn I expect to get all my chores down on the morrow!

Back in my Old stompin' grounds in the Old Pueblo
Brian
Posted by Brian at 10:02 PM

One of our favorite AZ state parks!

I'll be 'spectin a good documentary on that motorcicle tire job. Um, prolly over on t'other blog tho, eh?

When considerin' a new rear tire for the bike, ya might want to look at the new Michelin Commander. I've had good luck and service from Commander's on my bike. Michelin pulled the Commanders off the market last year for a rework, (got no idea why they would pull a good selling and performing tire off the market), and the new ones are now available. Don't know if they make them in your size, but it's worth a look see.

I've heard nothing but bad news about Metzlers.

Of course you could always go to the dark side, (car tire). You'll get great mileage, but the rear end will dance around like you got ants in your pants. I think you'll remember how my bike danced around when we tried a car tire.

Saw an add for the commander with "New Technology" yesterday... Haven't had a change to check for size. I'd be interested in 'em... I'm bettin' they don't build a 210 though :( Yeah I remember that Royal of your wiggling like a cheap hooker with that car tire back there. ;) I'll have to check michellin before I order.

I'm sorry to correct you, but it only takes 50 years before a Saguaro will grow an arm. From then on they an grow several arms a year, depending on the amount of rain and nutrition.