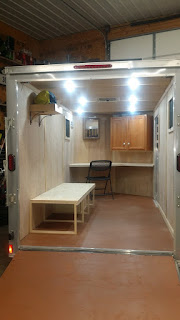 I knew when I shook off the past failure and stepped off on this next chapter it would be a piece of work.
Like when we cracked out, and left the old life behind, near ten years ago; people often asked how much money we had to do that; "Oh, I don't know, probably enough to nearly get to the end of the month."
They were shocked and wouldn't believe. But, that's exactly how it was...and is.
The pic is from a few weeks ago. Much more has been added. The bunk finished. A folding table, a shelf setup at the back...
I'm waiting on the last few bits I ordered to make my camp sustainable. All happens slowly as my once again hobbled income drips in and allows it.
Otherwise most of what I see necessary for the outfit is done.
Somewhere around April Fools day - very appropriate 😎 - I'm hoping to roll out... on a whisper and a hope.
Once I regain the road I'll do a little video tour of my camp as I've built it... I've been living in the biker hooch trailer for maybe six weeks or so... moved in just as soon as I'd assembled my bunk.
Since I'm changing the basic way of living; simplifying 'systems' and eliminating much of "high" technology  (much but not all), I thought it best to go to living in it and work out the kinks of my deal here at my daughters place in Missouri. Gives me sort of a safety net for those times when I say; "Well, that didn't work out quite like I had it figured!" 😎
What happened to the Lakota? Nothing. It sits despondent over beside the shop. Unused and unwanted. Selling her off or divesting it in some way is proving to be a real chore. Being 'upside down' relative to debt and market price makes it a tricky deal... it will get sorted eventually.
For now, I focus on getting set up to Crack out once again!
I'll be in touch!
Brian
Posted by Brian at 7:21 AM 1 comment:

The Drifter's Wagon Continues Its Build... 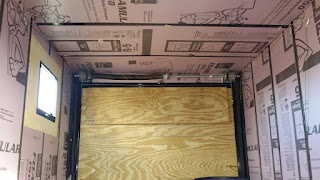 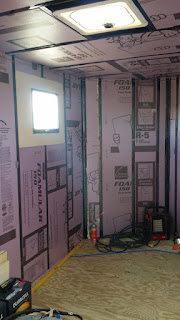 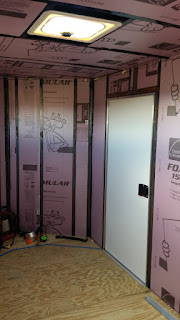 Got the windows cut in and all the insulation placed; as well as the plywood belly pan. (Which will be undercoated)
Waiting on some small parts from Amazon to get the wiring lined out.
I've chosen to go a Sam's Club option for batteries. Picked up a pair of 230 amp hour 6 volts. Sam's Club will allow me easy access all over the place if/when I need replacement.
I want 4 batteries but finances just won't allow it right now, so just the first pair. Chances are, with my light use in this little rig... two will be plenty. So it's a bit of experiment as well, but not much. I've only had two on the Lakota for a year with little issue, and those are about 15 amps smaller I believe.
The road is calling pretty loud now... cursing at me really. Like; "What are you waiting on fool? You think youth will return? Load up your whining ass and let's go!!" 😎
Still waiting on the title and registration work to wend it's way through the mail...
Much work left on this new "micro" house...
The completion of this work and my full return to the road cannot come too soon.
- Brian
Posted by Brian at 6:18 PM No comments:

A Couple More Steps Along the Road. 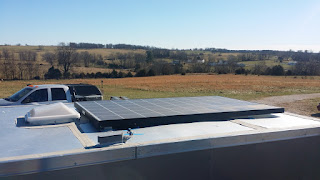 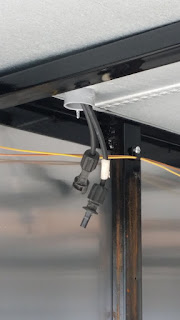 Took advantage of the nice weather today and got the 270 watt Kyocera Solar panel I stripped back off the Lakota mounted on the Drifter's Wagon.

Decided to run the cables right through the roof and seal 'em down tight, along with a big puddle of caulking around each foot of the solar panel.

The roof vent is kinda close but no option there to catch the roof bows for mounting. I'll only have to point the nose North when I set a camp so as to eliminate any worries of shadowing the panel... so no worries at all.

Now I'm waiting on the two little windows I ordered to arrive so I can get them cut in.

With the windows in place I'll be able to move on to insulating.

This "Hardside Tent" will be livable in no time 😉

This next gypsy season is gonna be a sweet one. Minimalist Biker Camp in miles  and miles of far country for my boots...

... and miles and miles of knees in the wind on winding ribbons of Asphalt.