Close To Getting Back On The Road... I'm Going Home.

A fresh set of tires went on before I started the heater core. HanKook at discount tire as always. 60,000 plus on the tires and the best customer service available at discount. And that's proven out all over the country... They've even spread up into Montana and the Northwest the last couple years so I'm covered now Where ever I wander.

I finished replacing the bad heater core the other day... no thanks to Chrysler. That has got to be the poorest design and placement for a heater core I've ever had to deal with. Had to cut it into pieces to get it out... and modify the replacement - to get it in!

Cut off most of the hard tubes and ran longer hoses inside the firewall. After three hours and a bit of pushing, shoving, torquing and cursing I'd decided the B@$&@*D was not gonna go in... so I cowboyed the sucker, triple clamped the hoses and put that job to bed.

So far... no apparent leaks... I was some afeared that We'd torqued on those swivel tubes too much trying to fight it into place... buuuut so far it seems healthy.

The Truck is now at the welder to rebuild the failing "factory" hitch on the bed... gonna take a mite longer than he'd planned (life gets in his way too!) but I should have it back  by Tuesday.

There's a couple of last jobs to do on the truck before I head west... and then I'm bound for what I'm looking at for the next part of this Journey.

Things are happening, choices made__which I will share as they come to pass...

As it stands now I'm looking to maybe hit the road late in the week... all depends on the welder and how the last lil' chores I need to do on the truck shake out.

A few scenes from the past several weeks;

I'll be rolling west on the interstate. As much as prefer rolling slow on the two lane, after the ordeal of struggling through the twisting and narrowing two lanes of east Kansas and west Missouri just getting here... I'm gonna take the super slab to get outa here and get where I'm going! ... Home...

Ready to start making another circle... 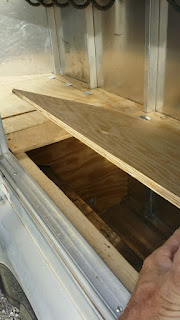 Finished an upgrade to the side compartment on the Lakota...
The Welder is laid on to repair/rebuild the forward/factory hitch on the truck. His price will save me a bundle over what I had figured I'd have to spend, so that's a good thing. Only issue is he can't do it until next weekend. So...
... Today I start tearing out the dash of the truck to replace the bad heater core. A job I was holding until the welding was scheduled...just in case.
Ugh... I'm- Not - a mechanic. But the $$$ to have a shop do it is HUGE! The core itself is only 60 bucks... I've been quoted $700 - $1000 for the labor to do the job!
Soooo... the truck is backed into the kids shop so at least I'll be warm and dry while I bust knuckles, curse auto engineers and get it done.
...U do have my motorhead son in law for backup in the evening... if I manage to wrench myself into a corner...
A few other upgrades still hoped for... as soon as the heater core and welding are done... if all goes well with that!
- Brian
Posted by Brian at 8:00 AM 1 comment: 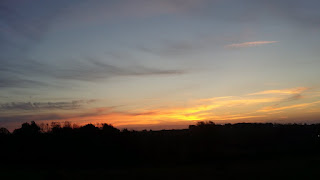 The harvest is finally done. I made a slow, three day run back to Missouri.
Planning on a week and probably a bit to do some needed work on this old truck. Tires, a hitch issue...a few odds and ends...
...then it's back on the road and west__to whatever the future holds
-Brian
Posted by Brian at 8:32 AM 1 comment: