Sitting in The Back Of My Horse Trailer House... 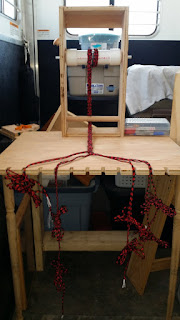 ... Braiding up some reins on my writing desk/braiding stand...

Works good for braiding... less good for writing... and with all my junk piled behind it__ kinda keeps horses from getting loaded...

Sooo... there's something else to be dealt with soonest. A storage shed of some variety is going to be needed at winter camp.

Just as soon as I leave the harvest job up in Montana at the end of October.

Giving the book a few days to simmer now that it's finished... before I dive into the edits.

Best to start that with as fresh a view as possible.

Have You Ever Stumbled Across a Man, a Showman... but KNEW On An Instinctive Level.... THIS... Is The Real Deal?

My life is in a turmoil. Old ghosts wreaking havoc... marriage gone... self respect in the toilet...
Everything I treasured and valued... family, commitments... broken... I am lost...

Why? Because of the spiritual connection that a man named Carson James exudes...

When your heart is broken. When your soul is raped and bleeding...
For someone like me there is only one poultice... one bandage... one medicine that has any hope of restoring your broken soul.

Carson James is a horseman... more than a horseman... he is, THE horseman in my mind. His perception is the sort that has been described by others as "horse whisperer".

What "looks" magical is actually the extremely sensitive perception of a horseman...

In a sweet and timely spark in the universe I have stumbled across... when most needed... A Horseman... who is a showman... but who is FIRST... a Horseman...

The sort of horseman who is real. Who will not sacrifice the animal for a dollar... who understands the mind of the animal...

... and most importantly... who understands, on a spiritual level... the need, the hunger of the Human Heart... for a connection with the pure soul of a horse.

Horses and Wild Dogs... Struggling to Compete with Cowboy Psychosis

Back in the spring I'd decided that to get where I belonged required a full circle back to my beginnings and back To Horse.

Made some significant progress fast... locked down a small patch of Arizona dirt for a winter camp location and also added Arlo to my camp. Then along came the Lakota... I had the new home I'd need...

... and then more sadnesses... those never seem to stop coming.

The whole reason, to be true and honest, for the choices I was making was that I decided that I needed Horses and Dogs back in my world to balance out the faults and sadnesses in my head.

For a short while Arlo did service to that hope... and then that sort of fell apart as he's grown and his true self was revealed. For Arlo was picked up believing he was bred an Old Style Australian Shepherd.

The past months have demonstrated the truth beyond any shadow of a doubt. Either the owner of his momma or the owner of the stud dog (the most likely culprit) failed to control the BORDER COLLIE stud dog that was also in the area...

... because I'll bet both my kidneys and half my liver that though his brothers and sisters may have had an aussie dad... Arlo ... is the consequence of a BORDER COLLIE getting to his momma at the same time.

Yep... I believe if I ever pony up the bucks to get genetic testing done it will prove my belief. Arlo has a dad... but his dad is from the most psycho breed on earth... BORDER COLLIES.

He looked pure Aussie at nine weeks... the past months though as he has grown, his conformation, ears, structure, personality, behavior, demeanor, every part of him that you can describe screams BORDER COLLIE...

and that made me madder...

Because the trouble with that is... I don't and have never fit personality wise with a border collie. They have been so badly inbred to set and promote their herding abilities that they are the poster canines for obsessive compulsive psychosis and Hyper Active Freaks with a capital H.

Now, you'd think that being half bred would tone down the whack job that those border collies are... didn't happen that way. It's more like in his case it's a Hyrbrid Vigor Frankenstein.

I've never seen a more hyper, more out of control, chewing everything he can get his teeth into, shaking, quivering, yapping, doesn't ever stop unless he's sleeping, psychotic furball with teeth in my life.

Which... on top of the issues already twisting my brain inside out, was definitely NOT what I was hoping for or needing.

The past week has been a bit of a nightmare with his psychosis rising to fever pitch levels.  My inability to deal with it only stoked the heat inside me that I've always fought to contain. And to my shame, because I wasn't shaping up to emotionally deal with his brand of whacko... I isolated him as a consequence of his bad behavior.

Only problem with that is... it only compounds the difficulties. You end up on a treadmill slowly digging itself into a hole... or in his case... spinning like a mudbogger in a sand pit throwing up a dust cloud.

Horses, dogs there's not a terrible difference in training. It's all about observation and understanding.  They are going to react to the world around them in certain predictable ways.

Yeah... pretty much like broken down, emotionally busted cowboys...

If you surrender to emotion when dealing with critters you already lost. Anger and emotion have no place in training animals. They can't change who or what they are. That's assigning human attributes to the animal that they don't possess. They're animals not people. Dogs and horses think as dogs and horses. It dishonors them to try and make them people.

I believe they call that anthropomorphizing or some such...

... luck with pronouncing that... I can't hardly spell it!

That's not to say that dogs and horses don't have souls... I believe they do... they're just different than ours. One of the differences is... Horses and dogs are Honest and Pure of spirit; where people rarely are.

It's that honesty and purity that my own soul cries out for in needing them back in my own life.

And it was my own dishonesty toward this dog that slapped me hard last night. He was aching for something he needed that he believed I had... and my response was emotional anger and impatience...

There's only two words worthy of describing that behavior in a man; Punk Ass.

... yeah... as good as I can be with horses and dogs... as much as I "Get" what they want and how they think... I can also be an asshat when the hurt inside is stirred up and I get to only thinking about poor little me.

So... today we started off on the first day of the rest of our life together. With that anthropomorphizing thrown out... again... and the honesty and purity of an animal's soul calming the confusion and sorrows spinning in my head.

Yeah... the spirit of the animal I was looking for all along... finally broke through...

This is where it gets truly confusing (Considering the idea of anthropomorphizing)... and where a lover of Horses and Dogs... simply accepts them with the Faith that though it can't be... it is.

A person who can say such as that has never felt the gentle touch of a horse or a dog calm the panic and sorrow in their own soul... and their spirit is the weaker for it.

"Whoever said a horse was dumb, was dumb."
~ Will Rogers

"When your horse follows you without being asked, when he rubs his head on yours,
and when you look at him and feel a tingle down your spine...you know you are loved."
~ John Lyons

Dogs love without condition... Horses... if they love you... see you as an equal.