Settled in at the fairgrounds now over to Sidney. Worked the first night of the harvest in my "short term" job in the Quality Lab. I'm training up a gal to run the scale... since I'm not going to be able to do that this year once the harvest starts in earnest on Sunday.

Left my BLM camp and rolled to the Cabelas in Billings. Figured I'd go inside and buy some "Lil" thing so  could get use of the Dump Station for free.

#1 - I have a cabelas card so it would have been free anyway... sheesh. annnnd #2 - buying boots and a shirt to save the five bucks to dump is the sort of math you learn from modern public educashun. :-/

But with some fresh gear I moved on find a wally world camp for the night in Miles city.

Next day took me to looking at a horse a ways above Glendive, Montana. She was in the far out and wild "Plains" of eastern Montana.

Took about an hour to find her bunch out on a section pasture. The colts had divided into three bunches and hers was the craftiest at staying out of sight for a while. They'd brushed up in the bottom of a pretty deep creek bottom. Wasn't till we rolled around the other side that we could spot 'em down below.

Those unbroke/half broke young horses, filly or colt, I pretty much call 'em all colts. This one is a young horse I think has a lot of potential... and will be one of my winter projects this year. She's got a very few saddles on her so it should be a busy winter what with all I've got planned...

She's locked down and waiting for the end of Harvest over by Circle... then... there's another I really want to take a look at... but she's over in South Dakota. It's a bit of a gamble... but if she's still on the ranch come the end of harvest there's a real good chance I'll go try and put her in the trailer to haul south too.


For those interested; Leather and Stone, my sixth western novel is available at Amazon It is also available through Smashwords and all of it's retailers on Pre-order as well. Click one of those links to go right to the book in Amazon or Smashwords... or you can search me up at Barnes and Noble or Apple... and the others.

It will release on the 28th. Anyone who is planning to buy a copy that does it on Pre-order gives me a boost because all those are credited on the same day which gives me a lil' bit of a ranking kick! So, many thanks in advance.

Gotta go get ready to work the lab now so we'll talk at you later.

Yeah... I didn't know such a thing existed either.

So there I was after a few days of fighting ee-lek-trawn-icks... struggling to get a book published... The sixth western novel and the first to cause difficulty uploading...

Well, after multiple crashes, regroupings, re-Nuking and reformulation I surrendered and sent the manuscript to a computer geek lady who had it fixed and back in the time it takes to write a couple emails... and refused compensation claiming it was too small a job to bother.

One tiny little missed "click" in the formatting process on a used to be clear and open and now hidden screen... crashed the whole deal. ALL attributable to Microsoft's penchant for taking working software and improving it into cumbersome, awkward NON-intuitive malware...

SO! with the thing fixed, uploaded and published - FINALLY - I decided to reward myself with a drive through the northern end of Yellowstone before I pull out in a day or so...

Hmmmm... traffic has thinned considerable__but there's still plenty. I came to a patch of it where folks that normally live in concrete pastures were busily building a Buffalo Jam. Now__sitting on the asphalt for who know how long watching townies take pictures of Buffalo cows silhouetted against somebody's church van is not my idea of a well spent afternoon... so I kept moving.

Yup... if you idle along the Buffs will generally move out of the way. 'course if they stop you've no option but to stop too.

Well, these didn't stop... I moved... and they moved and I was on my merry way... for about 15 miles... and then the flashing lights behind me said; "Tsk Tsk Tsk... you were a bad boy!" except, I couldn't for the life of me figure out what I'd done... seeing as I was rolling 10 miles under the limit.

I pulled into a wide spot and this dang near 6' blonde Amazon Ranger walks up and wierdly... was really looking at and all over the truck.

"I stopped you because we got a report phoned in that you were "Nudging Buffalo" ...

"Um... " I friggin' cracked up... "Are you serious? ummm... if I HAD BEEN you wouldn't be stopping me HERE! You'd be responding to the disabled truck sitting in the middle of the road with it's front end torn off!"

"If you Nudge Buffalo... those buggers Nudge Back!"

Well she grinned and laughed... and Agreed. "That's why I was looking at your truck so close... looking for damage."

We talked for some little while and she checked out my "Papers" to ensure that I wasn't some heinous jihadi looking to terrorize not only the american sheeple but a deviant terrorist hoping to sneak around NUDGING BUFFALO...

Laughed my way all the way back to camp... Walt Disney educated nature lovers are like somebody walking on a treadmill... they put out a lot of effort... they just don't get anywhere.

P.S. Leather and Stone is now working through the distribution channels and is or soon will be available for Pre-order at Smashwords (and it's retailers) and Amazon! (I'll get an Amazon link up as soon as it's live)
Posted by Brian at 10:01 AM 3 comments:

On The Banks of the Yellowstone

The smoke along the Front Range... from Momma Nature using fire to prune the overgrown Washington forests having become pretty obnoxious... even if it did make for interesting sunrises... 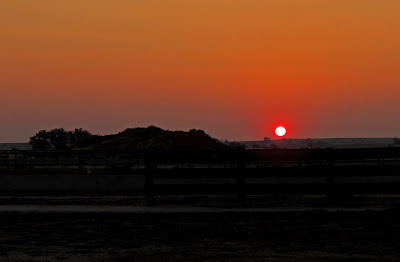 ...I rolled out like I said and pointed the radiator north... bound for Montana.

Been set up here in this camp for most of a week. Planned on staying down by West Yellowstone... buuuut... hitting there a couple days before labor day makes it kinda tough.

On top of that, this rig is a little dicier getting through tight spots. Being as it's built to haul some loads... the axles are set back to be centered under where that load (Horses) stands. The result being that though it's purt near the same length as the old fiver it cuts the turns a lot deeper...

sooooo... wigglin' through the cleverly laid out camps the forest service/park service are so skilled at constructing...

... with Hurry-Up!-I've-got-to-get-to-my-camp-NOW! townies trying to see how close they can get to your tailgate (apparently thinking ol' cowboys are prone to being bullied by folks with bicycles strapped on the top of their volvos) becomes a greater adventure.

Trying to worm through an area looking to find an empty camp with enough swing space to allow the truck to jack around during the choreography to back in... with Speedy Nature lover inching closer every few seconds trying to get you to move faster... is a gol darn good time!

The ones I truly admire are those that SIT there as you start to back up to work out a bigger swing. It being plainly obvious that you've got to back up a mite to take the "turn around"  cut-off... or better yet ... while you're trying to back IN to the spot you finally found... that THEY are now sitting in front of... squeezed up tight behind you...

Buuuuut are those mental giants going to concede an inch to let you do that? ...

Yes. They are! when that 18,000 lbs of steel and aluminum keeps coming they actually DO tend to back off and give a grumpy ol' fella some room!

But anyway... after just a night on the shore of a lake north of West Yellowstone I rolled up and around through Bozeman and Livingston... to come back down the valley of the Yellowstone. Found one nice night in a Montana Fish and game river access... 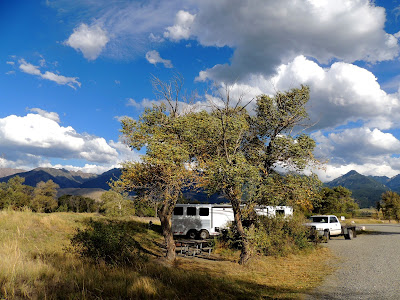 How-some-ever... me being the cheapskate boondocker that I am... the $12 a night, even if it had cell signal... was too steep for my long-term blood. A quick scout that night with just the truck located the right sort of place for me just another twenty miles south. Was surprised to find such this close (twenty miles) from the Yellowstone gate! 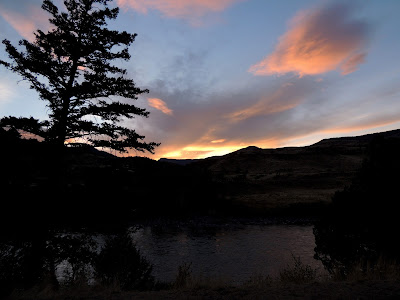 Still camped with the Yellowstone River out the door, Montana sunsets over the sound of the river... and plenty of room now that labor day has come and gone. A nice BLM site with few amenities and no fee. Suits me just fine.

Been working slowly on the editing to finish up my current project... The #4 book in the Jebediah Taylor series... more western shoot'em up!

That's just about done. Ever'thing's been built and formatted. I'm down to the last and final read through check before I upload to Smashwords and find out if I've done it all right... One. More. Time.

Soon as that is approved I can upload the Amazon copy... Thinking I'll do a pre-order again... release date to be determined but if I get it uploaded in the next two or three days I'm thinking a short pre-order time of maybe a week... we shall see.

I was getting pretty cross eyed so a couple days back Arlo and me took the afternoon off for a slow jaunt through the north end of Yellowstone...

Ok... so if I'm slow... and generally there's a four or five car stack that coax's me to slide into a pull out ever so often to let 'em rush on by... what do you call the pikers in a lil' bitty car, that can't even keep that between the shoulder and the center stripe? ... and go so slow they stack up 18 or 25 cars behind 'em?

... and then pass by EVERY wide spot without exercising the etiquette to pull over? 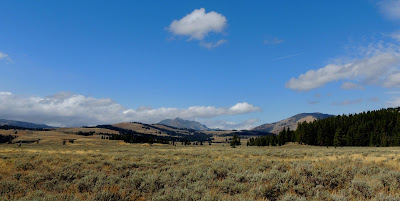 Rather than waste time trying to conjure a name or even an excuse I just swung out in a wide spot to soak up some scenery... a time or two... and let them play with their own lil' traffic jam as they rolled on away from me.

Um... No... I still managed to catch up... rolling road block that -I- am. Yup... 15 mph for I think 30 miles or better? yeah... took a lil longer than I'd figured... hard to slow down and back off of somebody when ya gotta take time lapse pictures to see if they're actually moving.

Oh well... the country is starting to empty out... I've got a couple of horses to look at before I start workin' over to Sidney on the 21st... and the final work to get done to button up this publishing project... so all's well.

Enduring the hits that life delivers with a heavy heart and a broken spirit, I am bound for Montana.
Somewhere up there is a place to hide for a bit.

I've got three weeks to brush up, complete the current book and get it published before the harvest job starts.

So I'll go on solitary and alone...

Sometimes life shines... too often what's shining are the tears running down your face.