When we were here last winter we were going to replace several of our incandescent bulbs with the new LED plug in replacements... buuuut they were sold out and were having some difficulty getting restocked. It is way out here in podunk Arizona you know... I guess the UPS driver kept getting lost and ending up in Hermosillo or some damn where.

Anyhoo... we limped along with those old fashioned light bulbs for another year... Well... this time 'round we done spent our RV Show nickle on a couple of gizmos... we bought six of those LED light upgrade/replacements from eez RV Products for one. 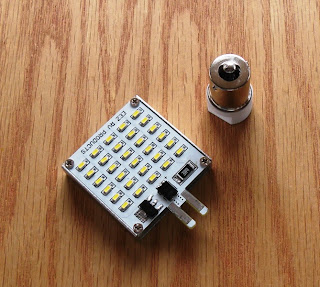 They're 30 LED units rated at 3w that are supposed to be equivalent to 25w and they claim a light output of 280 lumens... if you're like me those numbers don't mean didly.

I need to see 'em to know whether they work for me or not. At the show they had a wired up display set up... that blinded me so bad I had a difficulty signing the receipt slip. :)

The real test was of course when we took 'em back to the rig and plugged 'em in. 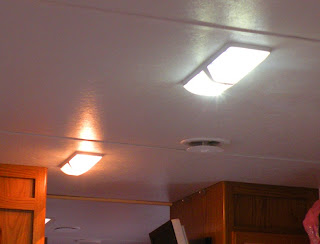 WHoooooEEE! Do they work? uh... Yeah! :) Compared to the old incandescent bulbs that were sort of a yellow color, these suckers are bright and white!

You can see that a bit in the pic... Old on the left... new and white LED on the right.

The ones I put over the table where I sit and work these days changed it from not being able to see to read at night to Oh Yeah! That's what I'm talkin' 'bout! :)

They cost us $15 bucks a pop... but warrantied for a year and rated to deliver 75,000 hours or so... I'm happy to be able to see at night! and every lil' bit helps in the reduction of electrical consumption when you live on batteries. So, they help there too!

The other thing we got was a pricey lil' bit of Al-YOU-Min-eeum  wind protection from Grill Guard. That was another thing we'd wanted to get ourselves last winter... and wimped out. We convinced ourselves it was too pricey and we could do without.

He'd done a demo with a laser thermometer when we were here before and showed me how much better the grill worked...

Well, we went without... Several times up in Montana and over on the coast this past summer season I wished I'd had the dang wind guard... 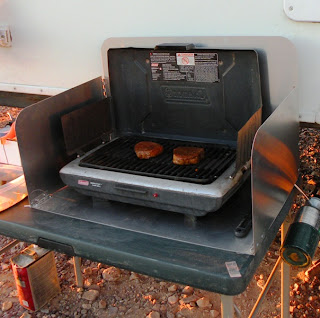 So... this time 'round... I plopped the coin down and got me one! Now... I'm sure you could fashion a workable deal with some time and pieces of sheet aluminum for less than the retail price.

But... I doubt you'd save much. The Aluminum used is a stiffer higher quality and that stuff don't come cheap. Then add in the hinges to collapse the thing, the rivets, the trouble of cutting it clean... Aw hell, I just paid the man.

I've used it several times now... with and without the wind blowin'. I don't know why something this simple works like it does... but... I'm tellin' you, it makes that coleman grill burn hotter. Makes the damn thing that was kinda marginal... work like a champ... and when the wind is blowing... and the grill wouldn't burn your fingers... it makes it work just as well.

So... the Lil' Doo Dads I got at this years Quartzsite rendezvous weren't low priced trinkets... but they're working well for me!

I now return you to your regular programming! :)

Workin' at Being Sociable in the Desert
Brian
Posted by Brian at 8:10 PM

Wow Brian looks like you got a great price on the LED's. I just checked out their website on their sale price is $24.95. They also look a little different and have 36 lights on them. Are the ones you got a newer model? Looks like them aluminum dowops might be good for keeping the dust out of your teeth during a good gale, Jeff.

I think their website hasn't been updated. I didn't see the ones we got either. The one on their site is not what we got. That's why I put that model # in there ;) If someone was interested in 'em I'd contact the outfit and ask about the 30 led unit.

These have that adapter too. We have the wedge type base so I don't use that. But am real happy with the light these things are giving.

And just to say it I'm not getting anything from these guys, as in no $ changing hands... Just reviewing how they're working for me ;)

RVers are talking a lot about LED lights these days. I'm certainly interested because I know how impressive LED flashlights have become.

But I'm not too interested in a comparison between LED lights and good old fashioned incandescent 1141 dome light bulbs, since these are only used for a few seconds such as when you're looking for something.

For years now, RV boondockers have used fluorescent "Thin Lites" for long term tasks, like reading. I read under one that draws 1.5 Amps (DC) times 13 Volts, or 20 Watts. It's beautiful to read under, and since the fluorescent bulb is long, it cuts down on sharp shadows, which the LED lights don't and can't.

Anyway, it would be useful if an RV-based reviewer compared the LED lights with fluorescent bulbs, instead of making straw-man comparisons to 1141 incandescent bulbs.

Boonie
Uh... Can't see how it's an illegitimate review. Every fixture in this rig was that wedge base small incandescent. I won't argue that it's not a poor light, but since it is what a Hell of a lot of rigs are built with, saying they're only used for a few seconds isn't exactly accurate, when they're the only lights in the rig.

That said I put one thin lite fluorescent in the kitchen area a few years ago. Compared to it the LED lights I just put in strike me as putting out even whiter, and a bit brighter light... Since they are rated for a lot longer lifespan, and use even less amps... I choose them over fluorescent. I have seen no issues with shadows... Being that I do leather tooling, shadows are something that get in my way and I pay atention to.

The last attribute over fluorescent is all you have to change is the bulb, NOT the entire fixture. Heck, they're even making long LED replacement units for those fluorescent bulbs now ;)Oh yeah... Then there's the slow start of flourescemts if it's a bit cool.... Yup, I'll stay with the LED! :)

Thanks for your reply Brian. That's the kind of information I needed and wasn't getting from other places.