Well... Friday we moved something like 85 miles west, from our Camp at Junction Creek, to a place out on the Desert, just into Utah, Called Hovenweep National Monument... 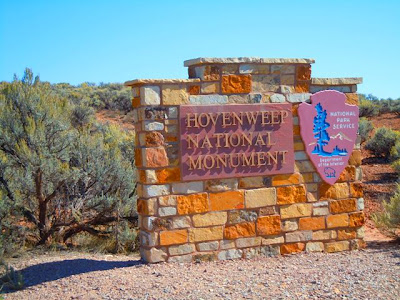 One of the benefits of stayin' here is the sun! :o) That camp on Junction Creek NW of Durango was... and still is... a sweet camp in the pines... but those pines depleted my batteries after stayin' there a week... Lost a lil' more ground each day... till my voltage was as low as I've ever run it...

We had thought we'd just set here for maybe two days... and then roll north a bit... to the Arches/Canyonlands National Parks area... but you know what? It's sunny, the camp is a whole whoppin' $5! for us :o) and we ain't in no hurry... so we're gonna park it right here... for another night.

Back when Mike and I did my Solar System Installation I thought we'd factored this lil' part in... but now... obviously... those two rednecks that done the deed... done it Wrong! :o) See... the thing is... when you tilt those panels, to get the most efficiency from a sun that sits lower in the sky during the fall and winter... that front panel is gonna throw a shadow behind it... so... ya gotta set the next panel far enough back, so it ain't in the shadow... or it just slaughters your electrical production...

... and... that's right kids... we set those panels too close together... so the onliest panel I can tilt is the back panel... So, when I'm ambitious enough... likely when I can finally fit another couple panels into the budget... I have to move that second panel back, so it's out of the shadow...

But, as it is, as soon as I tilted, the panel I can, the meter jumped from 85 watts to 127 watts of output... the way my calculator ciphers that... it's 'bout a 50% jump! Not so shabby huh? The point is... when you're installing those panels on Your Roof do the figgerin' better than I did... and space your panels farther apart so you can get that 50% increase with ALL your panels... and not have to go back an' fix it... like I do! :o)

I don't know if anybody has been wondering how the truck, after all the tinkerin' I had done on it, has been workin'?

I'd have to say, for a weathered, beaten up Ol' Dodge, she's been tootin' right along. The overheating issue seems to have vanished with the replacement of the Radiator... We've pulled some stout passes and grades and the only thing that Ol' cummins did was... grind up the mountain.

Right now... with hitched an' unhitched combined the mileage is jigglin' around 13.9 mpg... which all things considered... is acceptable... The red truck did a lot better... but it had to, to offset that $600+ a month payment! :o)

Now... the Hitch. As ya'll remember, I moved the gooseneck hitch back 18" to make room to load the Raider behind the cab... and I gotta tell you, that orientation is gettin' a lotta lookie lous scopin' it out; as many as the carrier for the V Star on the Back of the Fiver.

But... how has it functioned? No Comlaints. Zero.

Has it changed how the truck handles? Kinda. It's like this here... I can Feel the trailer back there now. That's all... There is just the slightest "porpoising" when you hit lil' humps in the road and such. Just enough where I can Juuuuuuuust feel it. I pretty much expected something like that so no big deal. It goes down the road without issue... and... coming over west of Cortez the other day, I thought I'd gone through some sort of a time warp and landed in the Yukon again! :o)

Hit a patch of heaved pavement... thought I was sittin' on a buckin' horse! Damn near got sea sick! Even made me spout some bad words and dirty names! :o) If the hitch and control didn't fail on that piece of asphalt... they ain't gonna! :o)

How about Hovenweep? It's interesting. Supposed to have been built an' lived in the same time as Mesa Verde... The ruins here are a lot smaller than some of those over in the Mesa... but we sat on a bench yesterday morning... and I tried to envision Living there. You know, at least when some other buggers weren't raiding your camp... and the corn was hailed out, and the snow wasn't falling... this'd be a darn fine place to wake up in the morning.

The quiet of the desert, the scent of the Junipers and the cottonwoods, down in the canyon... it's a fine place... and again, at five bucks to have use of an outhouse and drinkin' water... a fella can't complain. Dry times where I'll have to haul water to camp from miles away are comin' soon enough. :o)

I'll let you go now... with a few of the pictures we've collected here... 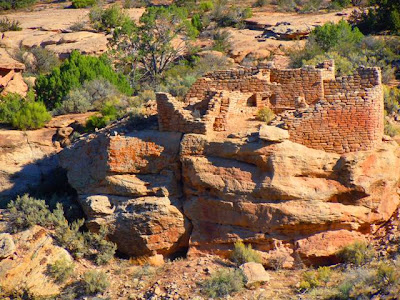 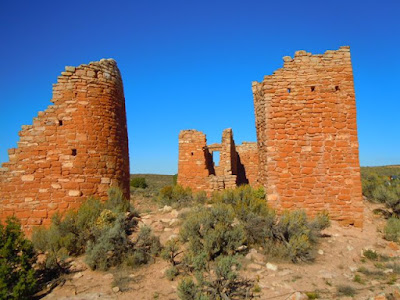 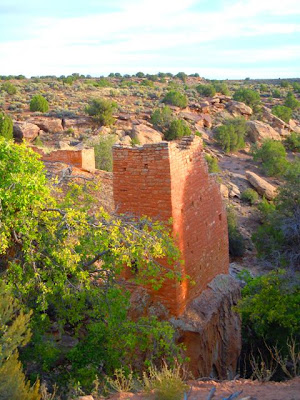 We'll talk to you down the road a ways... I gotta get my lazy butt to work... been lettin' too much slide lately... and people are hollerin' at me claimin' they want another story! :o)

You purchases, through the links to my e-books at your choice of distributors below, help support goin' RV Boondocking... and keep us on the Road!

Return to the Home  page of goin' RV Boondocking  or, Visit my "Ribbon of Highway"  Blog on the Lil' sister to this site, Motorcycle Touring on Freedom Road
Posted by Brian at 10:11 AM

Nice pics and since I am one of those hollaring for another book, gonna let you go and hit the keys. You always find the best places to camp, and dang, you can't complain about the price.
Have a great day.

Tell us about the PU brakes in the mountains, do you have exhaust breke?

anon: you touched a nerve! :o) The last two trucks had exhaust brakes... economics pushed us a bit backwards with our tow vehicle... I haven't been able to put an exhaust brake on this '99. It really needs one... Exhaust Brakes on diesels pulling good sized fivers changes everything! From a stressful downhill... to No Big Deal