Durango Camp at Junction Creek and the San Juan Skyway

We moved Camp over to near Durango, just a short haul.

Somebody had told us, on  a short hike, that the Fall Color was peaked over to Silverton... so we decided it was a good a time as any to move on a lil' ways.

The Morning we pulled out of Williams Lake some riders were doin' part of their fall gather. Was kind of nice to see those boys, geared up proper, and doin' the job proper. They even had dogs ... four of 'em... that knew the job.

Ever'body was in the right place... after some of the "Wannabe Jokes" I've seen lately... 'twas nice to see somebody stll doin' it right.

Stopped in the Frank Harmon Museum in Pagosa Springs on our way out. He's the one that wrote the Red Ryder comic strip and did western art. Interesting stop there... The Museum is actually the last house of Harmon and his wife... I got a picture of the couch John Wayne used to sit on, drinkin' beer with Frank... or that's the claim... too much excitement, eh? 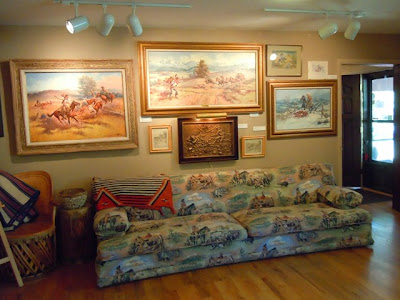 We rolled to a San Juan National Forest camp just NW of Durango that's still open... Kind of wanted to go to the Target Tree camp... but they already closed that... and it's the closest to Mesa Verde... and this, the BEST time to go to Mesa Verde.... Bureaucrats got no sense at all... not any...

It's a fine camp here though... and a word 'bout that... RV Boondocking... Using the self contained capabilities of the rig... to stay in nice country. Some think, I think, that we stay in RV Parks or something... that is something you'll rarely see me do... What I DO, do... is, I use National Forest Campgrounds in areas where I'm not familiar enough to go straight to a boondock site.

Starting out the last week or so... we've been kind of lazy when it comes to really workin' to get boondocked... and then, we've been using the N.F. camps, while we get "Back into the Rythm" of RV Boondocking... the struggles of the last couple years have got my head kind of turned around... taking a while to get the knots untwisted.

We got the Raider down the first night... Climbed on her yesterday morning for to make the big, 232 mile San Juan Skyway Loop. From Durango we climed Coal Bank, Molas and  Red Mountain passes... 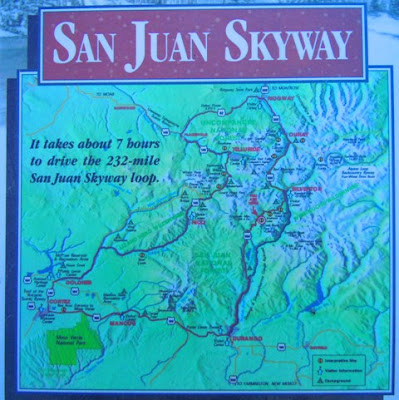 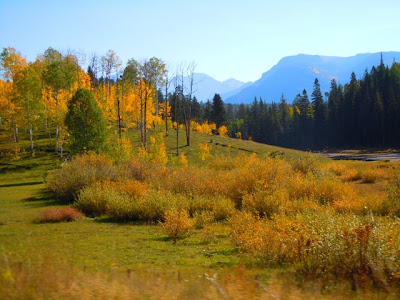 We stopped in Silverton for a late breakfast at a lil' cafe... and continued on for a stop in Ouray to say howdy to Mark an' Bobbie... who had to keep on workin'... poor kids!

After visiting for a short... we climbed back on the Yamaha and continued on, turning west at Ridgeway and then south on 145 to Telluride... 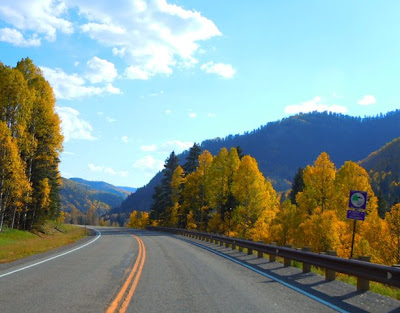 I choked down my dislike for getting on things that get me... waaaaaaaaay... off the ground and rode the gondola... again... up to the top of the mountain... 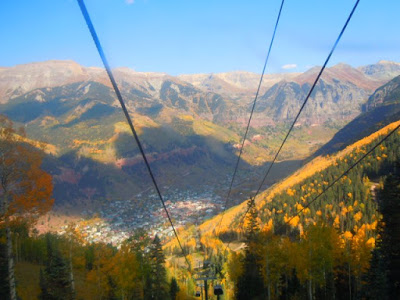 The 232 mile loop... turned into 245 for us... not sure where they measure it from... and we cut off the corner, didin't go to Cortez but turned back east at Dolores, taking the "shortcut" to Mancos... and back to Durango...

We've both been gettin' over some more-than-sniffles colds the past week... Heidi got it first, and generously shared with me... so... we was tahrd... reeeeeaaaal tahrd... when we got back last night... not a long while 'fore dark... 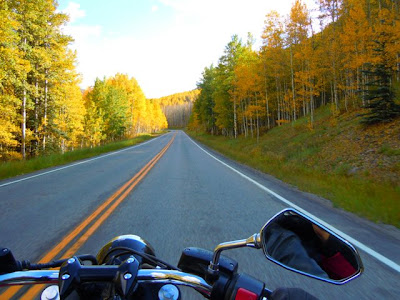 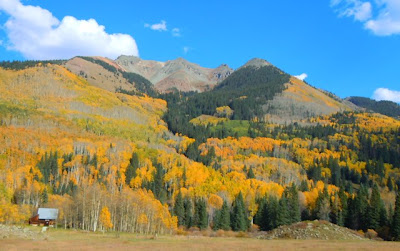 Return to the Home  page of goin' RV Boondocking  or, Visit my "Ribbon of Highway"  Blog on the Lil' sister to this site, Motorcycle Touring on Freedom Road
Posted by Brian at 1:14 PM

Gosh, your post today took my breath away! Beautiful photos and writing. I agree with you on boondocking: excellent choice where you are now; enjoy it while you can as the forest may close it soon.

Thanks for the ride today!

Oh my goodness, I didn't think the places and photos could get much better, but Brian, they just keep getting better and better. Love being along with you and Heidi for the ride. Have been to Ouray before and have rode the "lift" to the top of the mountain.
Stay where you are so you can post. Why not post some pics of your camp and camper and the boys and Heidi. I think they make fine subjects too!!!

I could hear the rubber slap the pavement of the road as i looked into your pics. Really enjoyed the ride! You didn't know you had a three seater eh Brian... I'm just as excited as you guys!!.. BiLL

Had to do my post from Wal Mart in town today... signal here is difficult... but we discovered the signal in the sites above us is steady and strong... so... if it still is in the morning we're gonna move a couple hundred yards up the mountain tomorrow...

Only problem I'm having here is too many trees! :o) sun can't shine on my solar panels through 'em!

But... if the sun and signal is good enough we're thinkin' of hangin' here and doin' some more day trips from here for several days...

I had begun to worry. Had not seen a post. Worth the wait. Your pictures are awesome. What camera do you use for these shots?

Your in God's country. I will retire there or, retire more than I am now once the kids finish school. Silverton will be it. Enjoy the change of season. I wish I was there.