I'm sure you've all seen some version of this meme... yeah well... me too! "Life is what happens while you're busy making plans!" 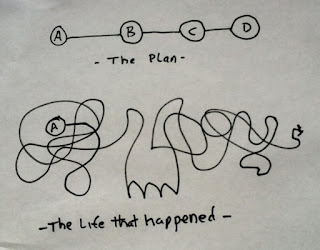 I believe I've got my brain untangled from the last dizzying gyration... if not my carcass. That chore is going to use up some time.

I'll be hauling out of Missouri for a bit of a circle Starting in the first week of September. I've a few things to take care of in Colorado on a swing that will then take me up to the eastern border of Montana for what's become my annual harvest job.

Then I'll be coming back to Missouri for the early part of the winter at least. There's much planned. Much simplification, much work... and much adventure. I can't say that I think that way... consciously searching out adventure. It's just the reality of how it works out.

Thing is, generally speaking, I've never the dinero pocketed to step off knowing what's gonna happen. So, a lack of cash and an impatient nature usually has me starting a "journey" 'thout knowing for sure and for certain how I'm gonna make it fly... I just always seem to get where I'm going. Even if that's not where I started out to get to!

But... when I look out the window, for sure and for certain, I am where ever it was that I got To!😆

I just work out the "Details" along the way! Since some define adventure as being some sort of a journey where you haven't any real notion of what's going to happen or how it will all shake out... I guess that makes my impatient, asset challenged kiester an Adventurer!

Anyway, at a minimum the late fall, early winter is set to be spent organizing and outfitting for the next chapter of this busted rover's journey. I think you might could find it interesting. Stay tuned!

I was beginning to think you had thrown in the towel...
Hang on to it, Brian, it'll mop the sweat from your brow in summer and help keep you warm in winter.
mark

Just waitin' to hear what works out and comes next!

So have you sold your Arizona place? And Cora? Out of the horse business ?
Any new ebooks on the horizon?
Being busted is what we do (horse people),seems that it's part the business from time to time. The good and the bad and run like hell. Good luck with your travels.
Miss your blogs..

Stymie; Haven't sold that dirt... I may put it up. It's one of those spots that has a really narrow market. Cora is on pasture in Missouri. I leave here in a few days to head for my fall harvest job. She'll remain here while I'm gone and likely will going forward. Been running against this wind now for over 2 1/2 years. Far behind where I started and losing ground. Comes a point when a man has to admit he's running on empty and the desire he had is gone... so I look to the future with different eyes.

e-books... hard one to call. I have one far along... after 7+ years, Amazon sales that were declining, disappeared in the last three months. Reviews remain 4 1/2 stars and better but sales vanished. Have failed to figure out why. That's left me running hard trying to stay ahead of the loss of income that accompanied that collapse.

Bottom line, it's also left me with the sure and certain knowledge that, to quote Monty Python; "Now for something completely different".

"Completely" might prove to be an exaggeration? IDK... We'll see how things shake out. Keeping it all close to the vest for the time being. Every time I speak a "Plan" I get whacked again... so this time I'll be keeping my mouth shut... for a while. I just have the very strong need for some time without having to bow my head and push into the gale blowing against me.