Just Me, My Horses and a Bat Shit Crazy Dog...

I've no sliver of an idea what's gonna happen come the spring or what the hell I'm a gonna be doing, so I just keep working here... I just keep on working like spring is some far off time that will never come.

For now... these are my reasons for being...


When every time you step outside they call to you... when they watch every time you are moving around... when they follow you around inside a pen... it touches a rider's soul. Those who know not the soul of a horse can't have any idea what I'm talking about... But those that do live with the spirit of a horse touching their own understand that "Thing" that cannot be put into words.

Lately the work has been going such that I'm sore and weary at the end of day...


The round pen got finished up a few days ago... at least to where it's functional. The ponies were greatly pleased to be able to move around some. They'd been cooped up for too long in their constricted pens...

The pens got moved as soon as the round pen got done. With the ponies being able to move around so much more with the big pen available I figured them to get along better. When I moved their pens I hooked them back together which allowed a bigger pen for Cora... I'd separated the pens so they wouldn't fight through the panels.

I also managed to apply some tweak to the panel CJ had busted up a few weeks back. Got it to where I could actually use it again, which stretches his pen back out a bit... so they've got bigger night pens and with the Round Pen in action they've got work to do each day which TOTALLY changes the atmosphere between my ears! __ and theirs.

The old saying that; There's Nothing better for the inside of a man than the outside of a horse is absolute Truth!

That carries over into a lot of other places... You get a lot more done when your vision isn't so dark...

One thing was, that NW corner of the patio I'm currently still working at was discovered to be a mite low... So, I added another course of stones wove in together... The fill to level that up went in today. 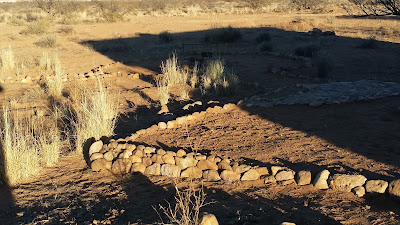 Then... the local range cows tore down my hay pen a couple of weeks back. Forced me to load the hay back into the trailer in the dark of night. I was NOT a pleasant cowboy... and it disrupted my "working space" in the back of the trailer... due to the fact that there was more hay so No Room for my work tables.

So... on a sliver thin budget I managed to squeeze out a few wood posts to set deeper and stiffer. Hopefully it'll make a pen good enough to hold those dang cows out... put it over by the new pens location by the round pen as well.

With the hay able to be took out of the trailer again... I got to work at sunset tonight re-establishing my work space in the back of my Lakota LQ... 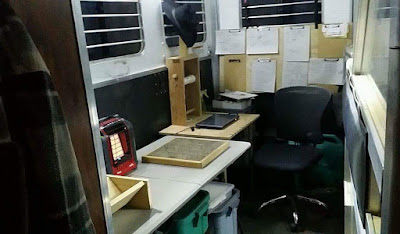 This time, I did things a lil' different... using the Braiding stand as my writing desk, leaves the bigger table open to allow me to do some leather work and maybe turn out a leather book/journal/album or two...


Sitting there just now in the dark of morning with that lil' heater roastin' me.

Picked up my second try with a Mr. Heater just the other day. The first try ended in a mite of excitement when it kinda literally blew up. Flame was goin' ever'where.

Fairly exciting when it's parked three feet from you!

So now, with this heater I don't hardly run the main furnace at all. I blanket up at night and leave it turned almost off. The batteries in this rig aren't up to the task. They die before the night is done if I leave it turned up.

Come the morning I fire up Mr. Heater... and only start the generator to crank up my Mr. Coffee...

A Bigger Battery bank and a solar system are on the list... but... that's gonna be a bit.

Just had a thought... Why is it always Mr.? How come we can't warm up with a HOT LADY heater? or take a sip from a Sizzling Suzie coffee maker? How come it's always got to be this damned polite MR baloney?

Well, for now, this lil' Mr. Heater has cut my generator run time by 75%. Made no sense to burn propane AND gasoline to keep warm.

A routine around here in the morning is to wander out into the desert with my Mexican Dump truck... and gather rock for the two main projects on my radar. 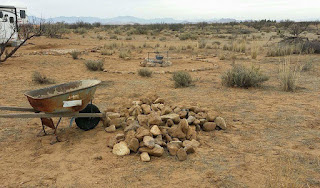 Those two being that patio that is creeping along, and, some sort of a combination leather studio/writing shed...

I feel like that pile of stone should be a lot bigger. The way my legs were quiverin' pushin' that dumper across the desert filled up with rock the half dozen times it took for that pile...

... If I can manage it... I've got and idea for maybe a small... as in really small__size of my current living quarters small__ stone cabin. Maybe even a small bathhouse?

Lots of ideas... the problem is... There is Always a problem hangin' somewhere around me; It cranks on me, it really really does, that these damned rats I've been battling can dig their homes out where ever they please. The Hawks flyin' around can build their nests where ever they choose and lord help you if you molest THEM!

The coyotes and cougars bunk where they want... and hunt when they want. The javelina come and go. The quail, the deer... ALL of them without requiring the permission of any others of their kind.

Only MAN requires those around him to PAY for permission to breathe and be alive on this earth.

ONLY MAN requires another man to seek permission to build himself a shelter.

ONLY MAN believes he owns and controls the earth. ONLY MAN.

All the rest just go on about the business of life...

You know what? That's me... I'm just one of those critters.

I don't seek the permissions of human soh-sigh-uh-tee... Humanity has proven that it doesn't deserve the respect I give a rat... I go about my life seeking only a couple of things Gus said;

Just me, my horses and a bat shit crazy dog... Free on the Earth.

Found your blog via another blog etc...enjoying reading your words...I never realized I own 2 Mexican Dump Trucks! I like the way your patio is coming together. Hope you can realize all your dreams I thing the rock house with attached bath would be brilliant!

Not quite the same-but you reminded me of Dean Martin's "Just My Rifle, my Pony, and Me"

I hope you are collecting notes for the book series, "The Adventures of Arlo: the Bat Shit Crazy Dog", cause I think I would be interesting/amusing. ; >)

call me loco but, I think you have a awesome adventure of a life

Hey Cowboy, glad things are looking up for you. Don't forget that man does have to ask permission in so sci ety to move on to property, but if animals don't , usually one will just eat the other...... :)