Progress on winter camp proceeds very very slowly. Materials requiring Dinero, like fence posts, fence wire etc. are difficult to accomplish when the Dinero is all in somone else's pockets. 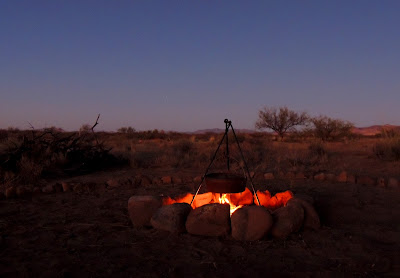 Started re-seasoning that long unused dutch oven... makes kind of a pleasant sight sippin' my brew as the evening cools down fast at sunset... once I start bakin' up my biscuits___um um um__ good Eating!

I have also started the rat wars. There's a variety of 'em around. It's not that I truly despise the dirty lil' beggars... but where you find a lot of those vermin... you find more snakes.

Now, the sort that just slither around and eat rats, no problem. Kings, Gopher snakes, etc... but... in this part of the world, a good population of mickey's cousins generally means a healthy population of the sort of serpent that buzzes when you come around... and THOSE I don't permit to live close by.

SO... the bait's have been goin' into tunnels... as soon as I find some, gopher bombs will smoke 'em... fewer rats... fewer snakes... but for right now, it's pretty much a standoff.

Gonna start on the round pen this week I believe, dinero or not. A few posts and go as far as I can till more dinero shows up. Gonna fall back and do it pretty much an old time cowboy pen.

Can't afford a welder, so... treated wood posts and girts (to deter the termites for a little while)... and then, I found a saw mill clear over into New Mexico. (hope to find one closer... but the greenies shut down all the mills I knew of in arizona years ago...  resulting in that Half a million acre Blaze a few years back from badly overgrown forests)

The mill is needed as I'll be hanging "slabwood" slats vertical on the girts. Approximately 6" to 8" wide by 7 or 8 feet tall raw slab wood "planks" will wall the Round Pen. That'll give me a tall and secure pen.

That round pen is an issue because... well... I don't much like doin' Quigleys... You know what that is don't you?

That's when your 160 pound butt is dangling on the end of a 30' rope as you get drug across the desert by a thousand pound pony!

Yeah... the filly is easy and far more co-operative. She longed sweet and easy.

The colt, uhhhh... he's a mite greener. Something goosed him after 3 or 4 turns. He was coming around to the left and sudden like cut back to the outside...

Jerked me off balance 'fore I could react. I ran 3 or 4 steps maybe trying to catch up so I could set and pop him back around... buuuut... surprise, he outran me!

The last 10' of that longe line sizzled through my paws till I hit the big knot and rubber disc on the end and then guess who got popped?

Yup... A genuine Quigley... dragging through 75' or so of Arizona desert with my nose in the dirt before I managed to stop him and get a handle on the situation. Or... like he prolly thinks; "Before -I- stopped!"

Like I said to some others before; I love Arizona, but it TASTES like shit! One of those "root hog or die" sort of moments... as we weren't in a pen... if I come loose... and HE got loose... aw... it'd be a tough while tryin' to gather him back up.

I must admit it was a bit of a left handed ego boost; The old buster has enough Cowboy left to hang on! That colt learned one thing. He can run, but he can't knock me off the end of that line! ;)

So... his training is kinda suspended till I get that pen up...

In the meantime I'll dig post holes... and haul rock to work on the other lil' projects I've got in mind... hit on one yesterday; rather than buy gravel or whatever for the path to and around the fire pit, there's so much rock around, it'll take a while but I'll just collect up enough flat ones to lay down a native stone surface.

Might even do that on the whole deck area... though that'll mean a Whole Lot of Rock!! but I got time and sweat... and that makes up for a distinct lack of riches.

annnnd I'll keep on working the filly. Since she's been saddled before, I should be able to be astride her in not so long a time with little risk.... and THAT will be a huge lift to my spirits.

Food for thought - Grandpa used two Model "A" tires slung over the saddle until the horse settled down. Grandpa decided he was getting mite too old for picking himself up off the ground until the horse quit bucking.

American can do never quit attitude! Thank you for continuing to post your goings on.

There is something satisfying about doing all your own work on your land...it surely is keeping me occupied...glad your OK,probably sore...:)..

I follow several homesteading blogs-and read about them getting free or cheap building materials on craigslist or other trading websites. Hope you are doing ok after being dragged around.