The round pen is progressing Slowly. Too slowly. I Really want to get to work IN it not ON it!

I have but seven more posts to set, as soon as some dinero shows up. Five line posts and the two gate posts. I've been scheming how to finish the "infill" of the sides. Was hoping to do that with barky poles cut on national forest. Their timber guy lead me to believe I'd be able, but then, that was last week and I've not heard a peep. Likely I'll just use some horse fence and call it good.

The Deck/Patio is taking shape. Takes a lot longer when you've got to go haul rock from two hundred yards away and more in a mexican dump truck! ... after you use that Mexican Dump truck to haul in the fill from gopher/rat mounds that lay in the opposite direction.

But, I set some big rocks to be the step down from the patio area to the path that leads out to the fire pit... 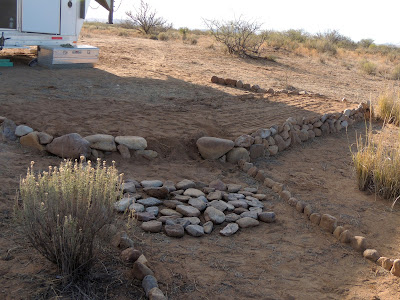 Then I started laying natural stone behind that. That'll be what will surface the patio. A lot cheaper than store bought pavers, and it'll look nice I believe. It's just gonna take some little while to gather enough up... hoping to do all that out to and around the fire pit as well. 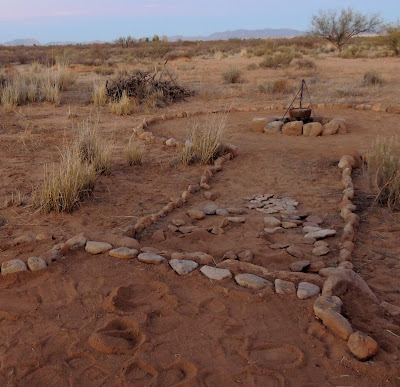 Making some progress. I just knock 'em in with a rubber mallet to where they're as level as natural stone could be... 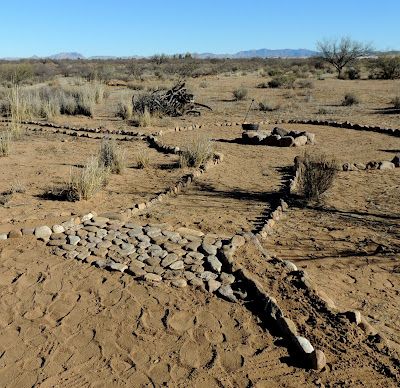 Another thing I've been working on is... The Rat Wars... and till today I've been in a bit of a stand off. Bait blocks, rat bombs... flooding... The rats, or whatever ya'll wanna call 'em persevered.

But then I seen a gizmo in the hardware store. It's a rubber deal that clamps onto your vee-hickle's exhaust pipe and you gas the buggers for a bit. Only problem was it was too small to fit the truck. And then, I had an epiphany!

I been spending too many dollars running the generator to keep the piddly pair of batteries the maker put on this rig juiced up for the cold nights we've been having. I tried a Mr. Heater "Buddy" to supplement - But it blew up... Kinda literally - which is fairly exciting when you're sitting maybe three feet away working on the laptop! ...so I'm working on that problem still. 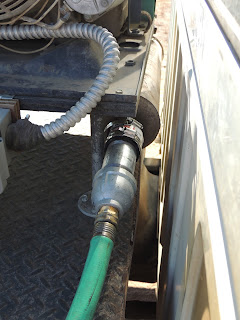 But, with a few minutes in the plumbing aisle I invented my own connection that clamps onto the GENERATORS pipe!

Since I have to run that a few hours a day and they say twenty or thirty minutes should turn the trick... 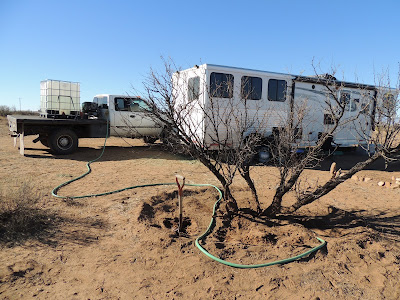 Soooo... as I juice the batteries I'll reduce the snake bait around here... and the damage the diggin' little chewers do to other things!

Then... I've been battling with the cows round abouts... Arizona is a "Free Range" state so you have to "fence out" what you don't want coming in... and I'm OK with that... I just don't have the dinero to get to that fencing... even just a couple strands of electric... so I built a little "hay yard" to protect my hay and get it out of the trailer - so  I can work back there (If I ever solve the early morning/night heating difficulty)

Well... Arlo has been finding use running the buggers off... I was hoping (but not really expecting) them to learn to just stay away... last night, 'bout ten O'clock I heard something, put the flashlight out the door and three or four of the wannabe Burger Kings were ripping down my hay yard... Pulled the T posts right out of the ground! grrrrrrrrr...

Left me with no choice but to hustle around in the moonless dark and shove what I'd spread out in the back of the Lakota LQ so I could work back into the front stall. Then pile that hay back in the trailer so I could sleep not worryin' 'bout if the hay I can't afford to replace would still be there come dawn... arrrrrggggghhhhh.

Seems like sunset and sunrise is when the light shows this place off the best... Here's some more of those Arizona sunset times... 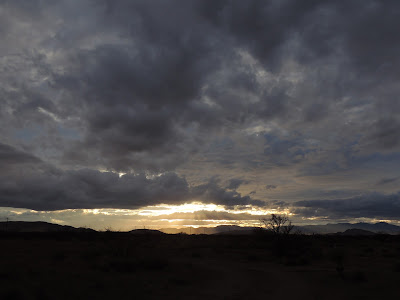 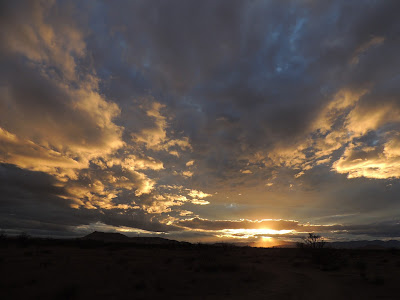 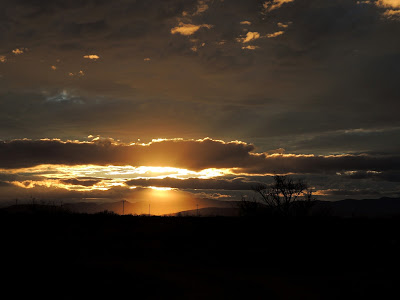 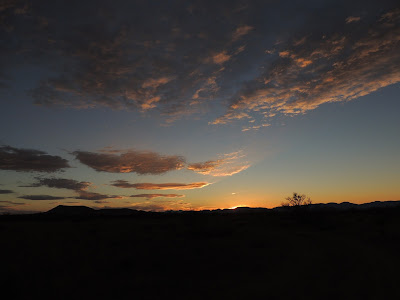 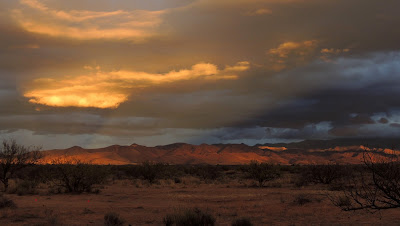 And a couple views of the Chiricahaus off to the east a little ways... 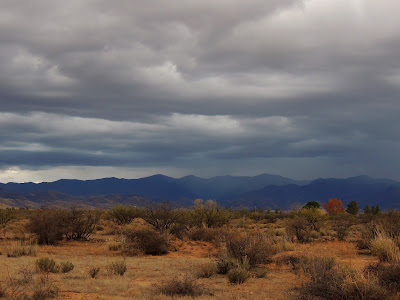 Like I said, here at 4400 feet or so it's been getting cold at night, down into the mid to high twenties, the last week or so. Supposed to do that for at least another week.

The simple truth is, like what they put in most "RVs" the batteries in this Horse Trailer rig aren't up to the task... considering the furnace they put in is barely up to the task... so... I'll be working on a more efficient, non electric heat source to stretch those batteries... until such time as I can put in the solar power and battery bank I am wishful of... but that'll wait on a few other priorities... and I'll just pile up more blankets at night.

Well that patio and firepit is starting to look good, but sorry about the 'marauding wannabe Burger Kings'! And hope you find a way to stay warm.

American Made ;) Empire ceramic tile or 'brick' radiant heater with thermostat. Propane with no fan. Steel base and chrome plated grill worth the expenditure you have to put out for one. Great company, warranty and customer service.