Working Up an Internet Sweat and... What's the Wrong With This Picture?

Whew! What a day! Spent 6 or 8 hours doing a major... and delicate... reshuffle/reorganization of a large chunk of the Goin' RV Boondocking website that I've been putting off for a long time...

Well, late in the afternoon I got 'er done and with no POOF! either. So, if I'm right, the navigation to a bunch of pages should be quite a bit cleaner and make more sense... hopefully translating into my wages recovering a lil' bit! ;)

So... late in the day I needed to try to get my crossed eyes straightened out so we thought we'd take a short drive up a road we'd not wandered up yet.

Just south of us is a spot on the map called Tom's Place. A couple houses and a lil' Pub/cafe/general store...

From that spot there's a road that leads back into the Sierras to a place called Rock Creek Lake.


We'll be bumping north in a day or two I think... and we'd almost not gone up this way before we left... Sure glad something possessed us to turn up there. Running up Rock Creek road from Tom's Place takes you up as pretty a mountain valley as there is. 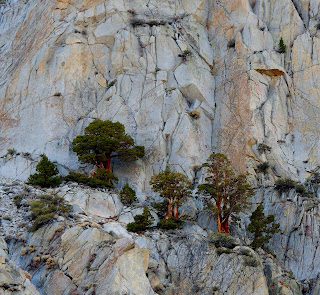 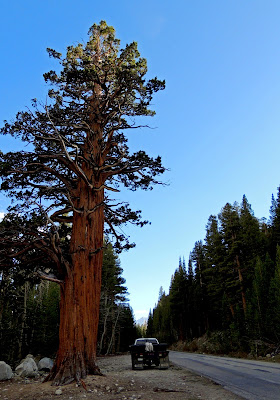 I'm no tree expert, but that sure looks like a Sequoia don't it? Anybody know for sure? It's what I'm thinking they are... only smaller on this drier, colder side of the mountains... Still a lil' bit more firewood than I could get hauled in one load though! :)

It was still just a sliver under 70 down near camp... as the altitude climbed it dropped off enough I cranked up the furnace in the truck so I could leave the windows open and smell the high country. 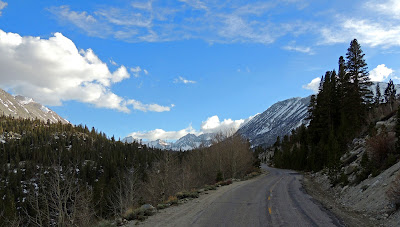 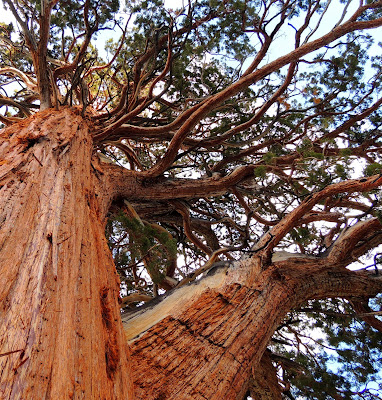 A lil' side note: The word is that Tioga pass should be open by the middle of the month. I'm hoping to be able to ride up over the top into Yosemite... that'd be my first time up that road, so I'm keeping my fingers crossed.

The only downer part of yesterday's drive was seeing how many USFS campgrounds there are up there that have the poorer end of the country pretty much priced out of using Our Own Campgrounds.

It's one of my what, Two Dozen Hot Buttons? :) I'll give you fair warning... leave now if you don't want to read about U.S. Forest Service Mis-management...

You know, the Dept. of Agriculture has at least two agencies under it; The U.S. Forest Service and the Bureau of Land Management.

The BLM, in our experience generally has equal or better built campgrounds which the BLM operates directly, and generally charges $5.

The U.S. Forest Service at this point has given about 60% of the Campgrounds which WE OWN and are its Chartered Management RESPONSIBILITY to Private corporations for management.

Here on the Inyo National Forest, all the Corporate managed USFS Campgrounds are $20+-!

Except... one is managed by those responsible for it while the others are pawned off to a corporation that makes no investment. (read the concession prospectus. Much of the work they do for repairs/improvements comes off their permit fees!)

Now... here's the real rub. The closest I can find (they keep the numbers well obfuscated) the permit fee for the Campground concessionaires generally comes to somewhere about 6% or so of the "Take"... (I wish our storefront rent back in Colorado was only 6%!!!)

What is wrong with this picture? Do you see a problem there?

If the BLM can do its job, and do it WELL, on that five dollars, why can't the USFS? They are part of the same Dept of Agriculture. What is the issue here if it is not some sort of corruption? Since the USFS has so many more campgrounds, I would think the economy of scale of their larger operation would make the USFS's job easier.

Oh wait... The Tonto National Forest in Arizona does just that! They manage their campgrounds Themselves... for $6! When we were at Cholla camp on Lake Roosevelt last year they'd just completed solar heated shower buildings and new dump stations! ... so why can't the REST of the National Forests learn to do their jobs?

Remember a couple of years ago when the USFS tried to eliminate the Golden age/Access cards for the benefit of the concessionaires? It raised such a stink they backed away from that foolishness quick time. Well, old timers... it's time to think of somebody else, not just us who have the benefit of the discount those cards afford us.

Think of a young, hard working, blue collar couple with a couple kids, rent, and doctors bills, and all, contending best they can with $3.75 gas, food inflation etc... they get ten days vacation and want to take the kids camping...

Ten days = $200 to stay in one of OUR campgrounds! or, if they can find a BLM... $50 bucks... A whole lot of people are simply priced out of the camps... all for corporate profits and bureaucratic laziness. It's just wrong Dad!

And yes, I said Lazy. What is it that the USFS is doing that they don't have the time to manage what They Were Hired to Manage? Why don't they have time for it... while the BLM does? ... at 75% less cost to the public?

I mean, the U.S.F.S is busy pushing ranchers off their grazing permits.(resulting in damage to the land from the LACK of grazing. They sure aren't busy putting out logging contracts... they've eliminated the greatest majority of logging in the country (made obvious by the rapidly worsening health of badly overgrown forests).

Maybe a few million letters to the right congressmen might make a few changes happen?

If the BLM, as well as the Corps of Engineers can get the work done as they are chartered to do, at a public cost that is affordable for the working man, Why can't the U.S. Forest Service?

Don't you think it's time for a change? Maybe we should just cut our costs... Eliminate the U.S. Forest Service, and transfer responsibility for those lands to the Bureau of Land Management? They sure seem to be able to do the job a lot better... Just sayin'

Until there is a change;  If the fees charged are more in line with those properly collected by the BLM I'll use a camp... otherwise, I'll be using concession managed campgrounds as a last resort and then only for an overnight. I'd urge others to do the same.

Agree, Agree, Agree!! A dismal picture of laziness and corporate greed bedding down together!

Totally agree!! I was sad to see how many of the campgrounds in the Eastern Sierras had gone to concessionaires and thus upped the $$ to ridiculous prices. The BLM campgrounds are well managed and only $5/night!

There are still a "few" free NFS sites in that area incl. Hartley Springs and Glass Creek, but who knows how long before they're also given to concessionaires?

You are in my favorite area!!! Love Rock creek area, and anyplace along 395 realy.I did stay at a campground last year for $12 a night just out of Lee Vining on highway 120. But, I see you point and agree with you !! They should all be $5 !!

The trees are Western Junipers. They grow on the drier Sierra east slope. The sequoias grow on the wetter windward slope.

Beautiful pictures of the trees and Rock Creek area.

Right on! I was at Tuttle Creek in May and loved it. As you said, a few miles below was the NFS campground at four times the price. And...the NFS often charges an extra $6 fee for a second vehicle if it isn't hitched to the RV.

Contract work may make a profit for the concessionaire, but it sure doesn't save money for the federal government, whether in Iraq or California. Or, does it? Well...maybe I spoke too soon. Seeing the outrageous prices for the California State Parks I am a bit confused there as well. I can't quite grasp why it is necessary to charge $50 a night (or more) to camp in state parks.

Thank God we have a BLM that does an excellent job at an affordable price for its clients.