Just a few years back, in gee-oh-law-gi-cuhl time, something like 620 years, there was a bit of noise around the Mammoth lakes area.

Of course they weren't calling it that then. They just called it home; and I doubt they were sliding down half-pipes on the mountain either. ;)

A bubble of hot rock had squeezed up close to the surface and hit a collection of ground water.

The consequence of suddenly super heated water confined by a few billion tones of earth and rock is the physics that makes a steam engine work... A whole lot got moved in a short period of time!

We had to go to Mammoth to pick up some general delivery mail... so we thought it would be a nice walk to make the run into the Inyo Craters trailhead and stroll up to the craters.

Now, not too far off the pavement was a spot I was too busy drivin' through to stop and capture the pic of... but imagine this;

... a one lane dirt track, bordered by foot and a half diameter pines on the left side and a dirt bank on the right... the track itself corked with a 'sorta' frozen snow bank maybe 18' or 24" deep, sloping from dirt bank... almost... to the trees.

Heidi; "We're turning around right?"
Brian; "Why?"
Heidi; "Because there's a snow drift blocking the road? Duh!"
Brian; "Blocking? THAT ain't blocking! Muhahahahaha!" ... as he pulls the shifter into 4 low.

Well, there was a thin strip of dirt (18" or so) between the sloping drift and the trees... I figured, if I put my left side tires on that dirt, that'd give traction to keep me goin' straight...

Turns out it worked too... until I was maybe halfway across the 50' wide drift. :) when the tail of the truck started sliiiiiiiiding toward the trees...

Being in the middle of a "Thing"... I sure couldn't stop!

Nice thing about a diesel is you don't have to give it throttle... just let 'er idle on through...

I watched in the mirror with my left eye as the rub rail of the bed approached the tree and with my right eye peered out the windshield at the approaching far side of the drift. It was gonna be close! :)

Behind me in the cab I could hear a sound. I don't know what it sounded like... it just didn't sound happy. :)

That Ol' dodge sawed it's way through and over that half frozen chunk of snow and never touched that tree... juuuuuuuust barely. :)

From there it was pretty clear rolling all the way to the trail head. 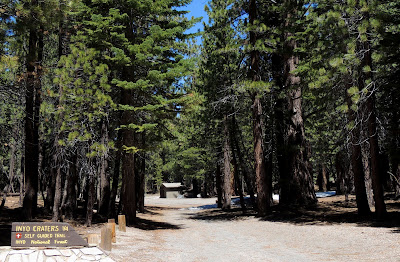 When you leave the parking area you climb up a gentle slope through heavy timber. The day was warm and quiet, and we had the whole spot to ourselves. Not another soul had we seen coming in.

It's the sort of walk I really like. Everything so quiet. The only sounds the occasional bird off in the distance. The scent of pine in the dry air. The sun filtering down through the trees, a clear blue sky shining through the branches. No wind... just that feeling you get when you're on such a trail in the mountains... Home again.

Even the sounds of our boots were muted by the soft trail of pine needles. Here and there a raven would sail down silently through the timber... likely they were hoping to see the usual careless two legged visitor drop a sandwich or something. ;)

They'd starve living 'round me! 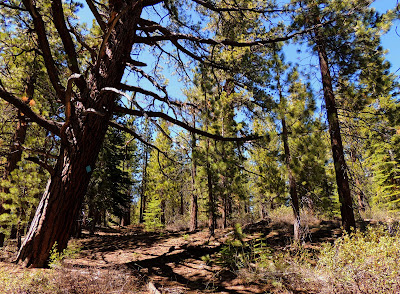 This is the kind of forest that's hard to put in a picture. All you'd see is a wall of timber. Without the scents and the feeling of space around you... and that intangible "feeling" such a place gives...  a photograph can't capture but a small part of the "picture". 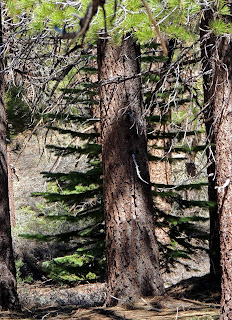 The walk up to the craters isn't far. I'd guess a mile maybe?

You're strolling along just looking off into the trees enjoying the day...

...up ahead you begin to notice a hole in the "horizon:.

The trees thin out and you think; "We must be getting close." 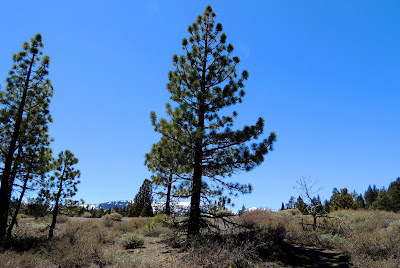 The snow capped peaks appear on the horizon... Yup... this must be the place... 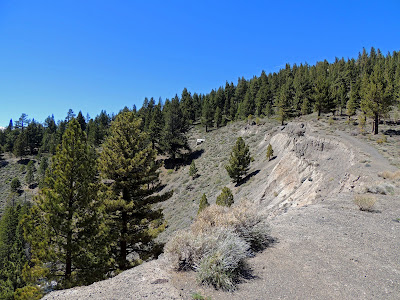 You come out on the back side of the first crater. Yeah there's two, only a couple of hundred feet apart. it's kind of amazing that they didn't just make one big hole when they blew...


Would have been a bad day if you were camped here huh? Good thing they don't let things like this happen any more! :)

These craters aren't "spectacular" like you see at crater lake, the crater in Death Valley, the big meteor crater SE of Flagstaff... yadda yadda... but... they make an interesting spot along a nice walk in the park! ;)

...If... You got a fine old truck to claw its way to the trail head. Otherwise, you're gonna have to wait for the snow to melt off so your Honda can make the drive. ;) 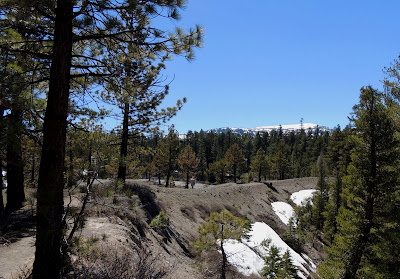 Around to the left is the narrow ( a couple hundred feet wide) strip that separates the two craters. The difference 'tween the two craters is kind of odd at first sight. Until you come to know that the south crater was the second blast.

I think its detonation dumped a lot of loose earth into the first one to give purchase for the trees to grow... that's my story anyway.


I don't know why the north is filled with normal looking "lake water" while the other has the emerald green stuff either... I suppose it's because of all the trees and vegetation growing in the first one? 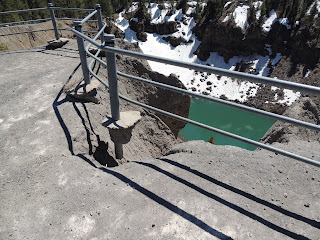 You might want to watch your step wandering around the edges...

There seems to have been juuuuuust a mite of erosion...

They put in a second safety fence since the first one looks to be destined to drop into the crater... 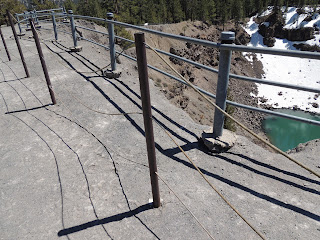 uhhhh... I can't say that the "Safety Fence" gave me a whole lot of confidence...

... and wouldn't it have been a whole lot easier to pull out the "Old" fence... before they erected the second? ...

...or have to fish it out of the bottom with a helicopter? Just sayin'... 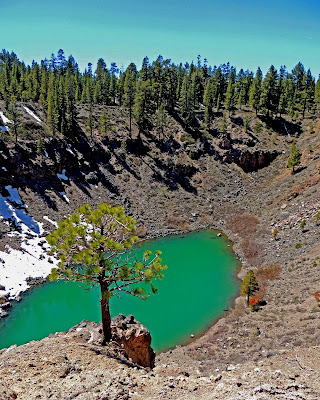 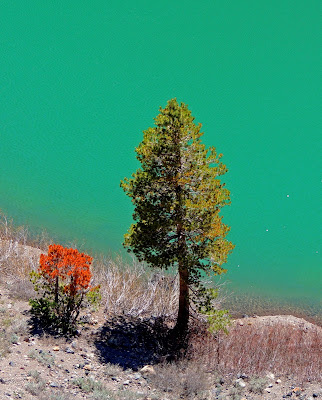 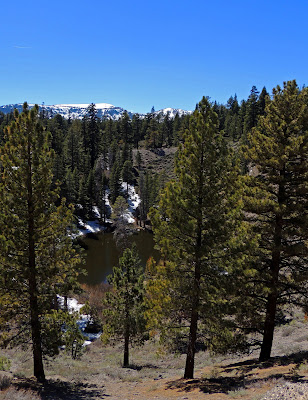 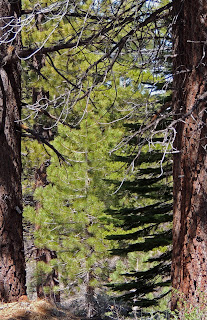 If you can get to the Inyo Craters trail head it's a nice easy walk.

Stop at the visitor centers where ever your travels take you. Scoop up the maps available. Get in your toad, on your bike, pedal or V-Twin ;) or put your boots on the trail and explore.

Keep your eyes open for interesting Back Roads... and turn up 'em.

... and don't forget to pick your eyes up off the trail as you walk too. I see too many walking with their eyes on the ground. Do that and you miss the lil' jewels along the path as you walk by.

Get out and Go Backroading
Brian
Posted by Brian at 10:28 AM

Man that road in sounds like an exciting adventure in it's self. When our paths cross I'll buy the diesel, you drive, I want to see first hand how you get away with those tight spots. I might learn a few things.

Looks like a beautiful spot to hike to. We definitely want to explore this area someday in the near future.

Wayne; uh... you might not want to learn what I got to teach when it comes to backroading... sometimes it's a mite too close to "Hey Guys! Watch this!"

Kevin and Ruth; Don't know when you'll be shutting down your summer work... but this country along U.S. 395 is supposed to be pretty exceptional in the fall