Another One of "Those" Days...

You know the kind... the day itself somehow isn't a Spectacular day... but you just can't see how it could polish up any finer.

The week or so of weather we've had finally passed on east. The day broke off mostly sunny and warm, at least warm enough for us to climb on the Raider and ride up June Lake scenic loop with Dale. 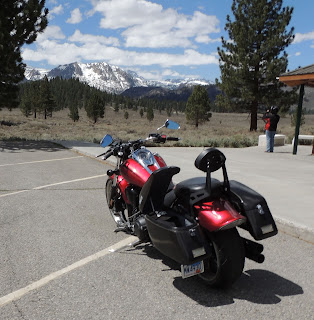 He's an Ol' boy a couple of years my senior that climbed on a Honda Shadow a good while back and has been living on it, and under canvas ever since. Now THAT is minimalism! ;)

The road goes up past June Lake,  Silver Lake and Grant Lake and comes back out to U.S. 395 just below Lee Vining and Mono Lake...

Now I know that there's a passel of people think Mono is some sort of special thing... and I usually catch the "feeling"... this was one of those rare times that it just fffffttttttt! flew on by. Mono just don't do anything for me... Kinda odd. It's not an ugly spot or anything... it just for some reason... fell flat on me...

We made our stop at the visitor center... but the roads that go out around the lake are pretty much all dirt...

If I was riding solo I might try a few of those dusty trails... but two up on soft dirt tracks? ... Nah... I'll go down the asphalt and find some lunch! :)

I did get a portrait of one handsome lupine there... The word is out that the Tioga Pass road is to open today at noon... We're gonna give it another day or two and maybe ride over it on Monday... unless herself talks me out of it ;) and we take the truck. :) Me... my vote is for the Raider!

On the return ride we opted to run the June Lake loop in reverse... but first I had to make one of my every quarter mile photo stops... good thing Dale wasn't too famished. ;)


That is another of those too short beautiful roads that you wish wouldn't end so quick. It's as pretty as a rider needs. Along the way, at Silver Lake there's a lil' cafe' there in the summer by the same name. We pulled in there for an excellent lunch at a reasonable price.

Fact is, I made the comment that if you hauled that same lunch to Mammoth Lakes... you could double the price! ;)

With distended bellies we climbed back on the scooters and finished out the June lake loop coming back to the spot we'd turned off of hwy 395 just a few miles above our camp. 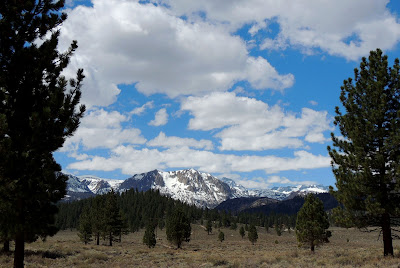 I decided I needed to roll some more miles so after dropping herself back at the rig I rode on into Mammoth lakes over another of those too short roads... the Mammoth Lakes Scenic Loop road 203.

That's a risky ribbon of highway for a guy like me. Nice smooth pavement. Sweeping turns that are cambered properly through high country timber... It's just plumb hard for such as me to keep it legal in a stretch like that! ;)

Buuuuuut I got to the pharmacy for my legal drugs and Thrifty Ice Cream :) and kept it allllllmost legal on the ride home.

On such a fine day it seemed proper to take a nice lil' siesta... and so we did!

It's one of those many pleasures of this life we've chosen. The pace is one you choose for yourself. No Time Clocks, no schedules to keep... No demands... You own and command your time. You have the option of filling it with whatever pleasures you at the moment. Suh-Wheet!

In the afternoon... under the sinking sun as it settled into the sunset we made our afternoon/evening walk out into the country along the creek below the timber that shelters our camp... 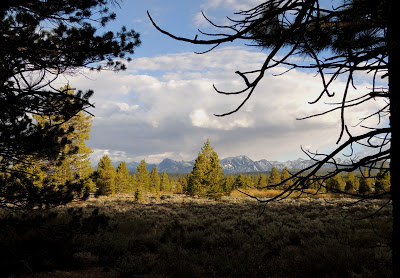 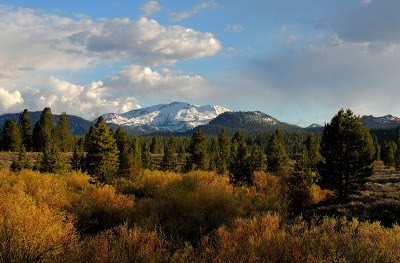 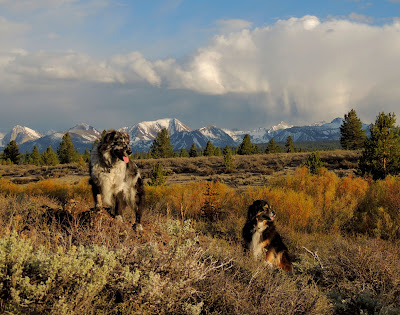 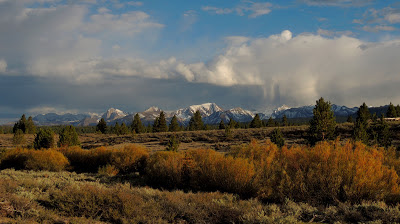 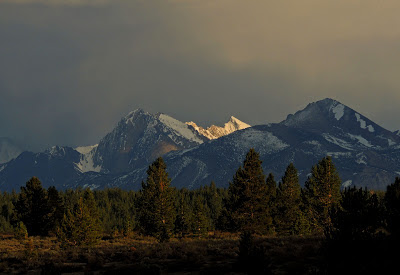 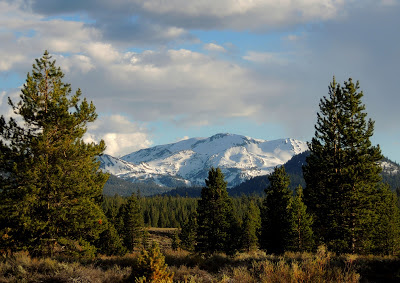 We've already decided... Ok... herself decided ;) the fall of 2014 is gonna be spent rolling south down U.S. 395 through the Eastern Sierras. This fall is already committed to labor in North Dakota. :)

It's gonna be tough to hang out in the area for another two or three weeks... but I believe I can manage!

Hard to call yourself poor in a life like this
Brian
Posted by Brian at 11:05 AM

The ride from 395 to Benton on 120 if really nice. From Benton to Bishop is so..so lots of whoop-de..doos lost gear out of my service truck once.
Taught my wife how to shift the pick-up truck pulling the 5th wheel LOL Last time she ever asked "can I drive"
Bob

Brian, are you going to do the Sugar Beet Harvest?

How'd you get those dogs to pose for that absolutely beautiful photo? WOW!

foleybob; Mine scares me! so I do the driving... and she don't complain ;)

Whatsnewell; we are. Currently supposed to be based out of Sidney Montana