Pulling for Tucson we decided to take a road I don't believe Heidi has ever been on... and I can't remember being on it in the last 35 years... so... it's not real familiar.

Rather than haul across I-10 through Phoenix or even drop down and run across I-8, we chose to drop on down hwy 85 and make the run across the desert through Ajo, Why, Sells and other assorted nooks and crannies of the Sonoran desert.

Figured to save a bit of fuel too... running even slower than I do when forced to execute my rolling road block on the super slab! ... buuuuuuut... at $4.12 for diesel... my cipherin' can't work out any savings no matter how slow I go! I tried backin' up... but that just left me with farther to go! :-/

We got across the Barry Goldwater gunnery range below Gila Bend with no major difficulties... I got a bit nervous when that A-10 dropped in behind us and I started hearin' a beepin' noise... but when I locked up the brakes, piled out of the cab and started kickin' rocks and stuffin' sponges in my nerf gun... that pilot knew he'd poked the wrong badger and flew off quick before somebody got any bruises! ;) 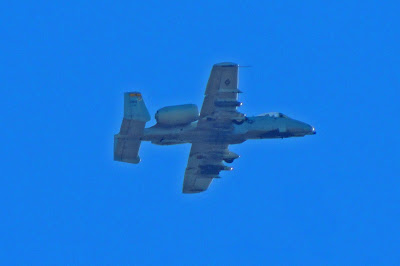 
Apparently, according to local muralists... the town is three miles past the edge of the world!

So... not sure which direction that was... We found a good enough widespot a mile or two up the Darby Wells road just a short way east of Ajo, without falling off... though I did rattle a couple of teeth loose on the washboard.

Pulled in early enough, even after a late start out of the Bouse area to take a short walk up the hill behind camp... and found about a dozen rigs scattered across the desert on the other side of the hill. 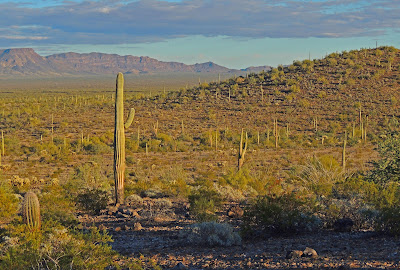 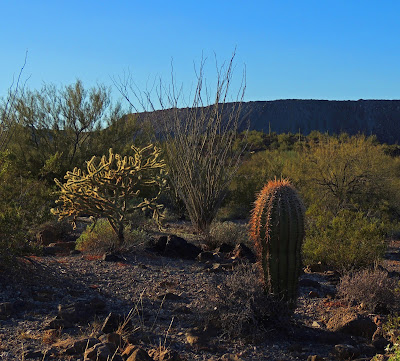 This area seems a lot fuller with flyin' critters too... and not just the tin can sort... 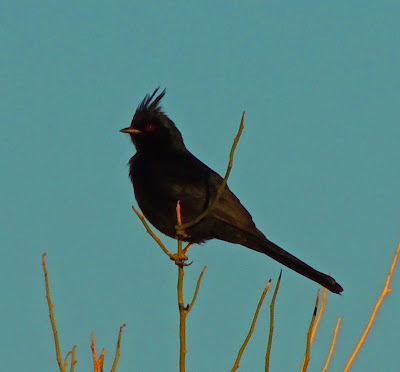 There was this guy that kinda looks like a Cardinal without the red ;) and I sure question the comfort of this zoomies perch... 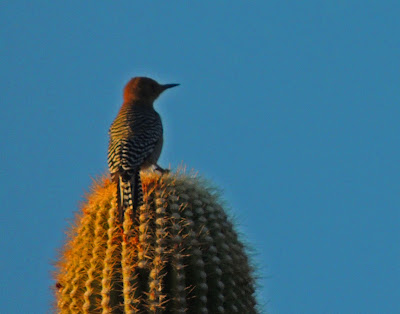 They were both sorta shy so the pics had to be grabbed zoomin' out purty far and hand held... things get a mite fuzzy.

The dogs jumped a couple bunches of quail that beat off a ways... and we could hear a pair of Doves callin' from the palo verdes... Lots of feathers to find for the birder sort I guess. 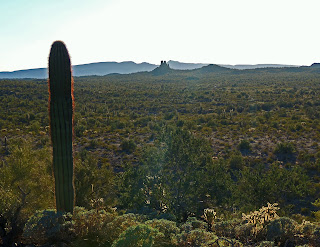 It is a pretty area... even with the remnants of "locals", which I don't get... is it a cultural ceremony or something? or just a character flaw that requires mental midgets to shoot up cactus and leave shards of broken glass littering as much of the desert as possible?

Can I say I just gotta question the value of havin' such dirt bags using air in a crowded world? 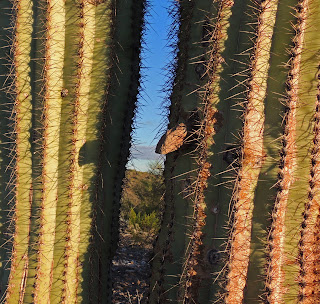 All the other lil' scars I took to be either .22 shots or shotgun pellets... takes a lot of skill... and considerable IQ... to shoot a cactus or a tree... We don't need gun control... we need pest control... and parents that actually inculcate a tiny lil' bit of respect in the replacements they're inflicting on the rest of us...

I can't but agree with the folks that say; "We have to pass a test to drive a car but any damn fool can wiggle their bean, reproduce and call themselves Dad... it just makes no sense." ;)

Maybe what we need is a new regulation that allows the common citizen to tally up three "events" a month of applying educational cellulose to random miscreants they stumble across in every 30 day piece of time.

"Applying Educational Cellulose"; that's when you take a decent length of 2X4 and lay it firmly along the side of the useless eaters head in an attempt to knock some sense into the mouth breathin' beer sucker. 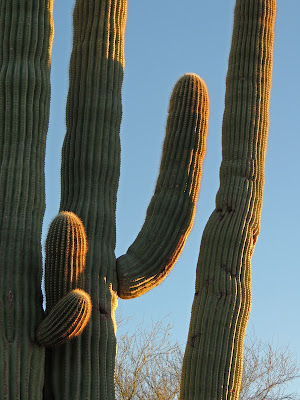 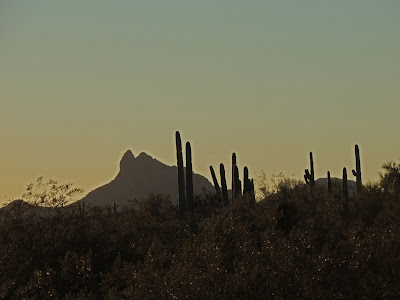 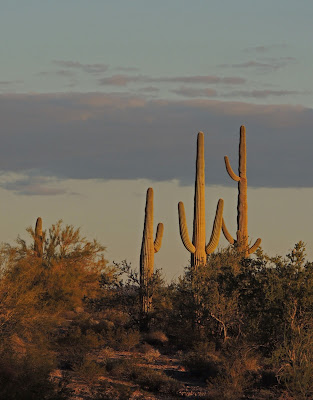 Yeah I know... breathe in breathe out... It's their RIGHT to be stupid... right? So, look out across the glorious wide space I call home... and if some poor misguided loser finds that all the air leaked out of his truck tires while he was out busting beer bottles and vandalizing five hundred year old cactus just shake my head and say; "Damn... it must have been his Karma!" :)

We'll be in Tucson tomorrow. She'll get to scopin' beads and I'll get to splittin' the wind and stringing words... and maybe somebody will invent a way that we actually CAN fix stupid! :)

Not Where I Was and Headin' Toward Where I'm Not
Brian

"My momma said, 'Stupid is as stupid does.'"
It is a shame that there are so many wastes of skin in the world. I'm glad there's still enough decent folks around so that I don't start thinkin' of makin' fertilizer outta the rest.
Sorry about that ... it's too early in the day to start thinkin' negative. Gotta another sunrise on the way and I need to celebrate another day on the topside of the sod.

Well said Brian! My niece and her husband are foster parents, wonderful foster parents. The stories you hear from that side of the world would curl your hair! Stop rewarding these people for having children!

Hello! your blog is great, I'd love you to join my travel websites, and you put my link on your site, and so we benefit both.

I await your response to munekitacate@gmail.com

hey Brian, were in Ajo, AZ right off the main rd .. shame we didn't know you were in town, we could of met up again.

We drove Darby Wells in our truck and sure was glad we didn't have our rig behind us.