From the Trailer Park... To Saguaro National Park

Anyhoo... ONE of the nice things is... When you live cheap and don't have a yard to mow or bushes to trim and your time is mostly your own...  and even if your preference is for the high up and lonesome in far country... you can still park that 280 sq feet wedged into a hole between you and the neighbors, with nothing but four coats of paint 'tween you and them... but then climb on the Raider and in minutes be...


Yup... out in Far Country... Rolling through the sort of space where you can't even see any neighbors.

Just up and beyond the fairgrounds a few miles is the eastern division of Saguaro National Park. I hadn't run through the gate in a lot of years. Used to make a roll through it every couple of weeks.

Hard to see it... but up on that dark mountain top is all Ponderosa pine. Somewhere hidden in there is the Manning cabin... the remnants of a summer homestead built back in 1905 or 6. The Forest service uses it for patrolling rangers now-a-days I guess. 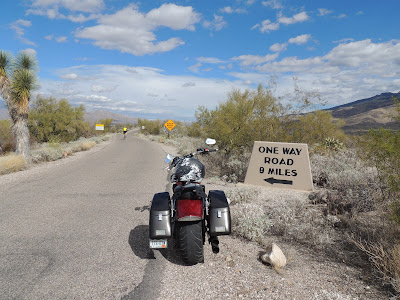 Inside the park area there's been a one way loop drive for as long as I can remember. Traffic is light and pullouts are many... and truth be known... when you're on two wheels, there's room to stop for photos just about anywhere the urge strikes... 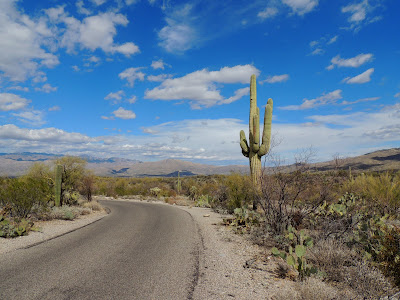 Used to be when I was a 16 year old Arizona cowboy... this place was a few miles outside of town... now-a-days the city has built right up to the western approaches. Luckily, the lack of private land NE, West and SE should give the place some protection from asphalt and rooftops. 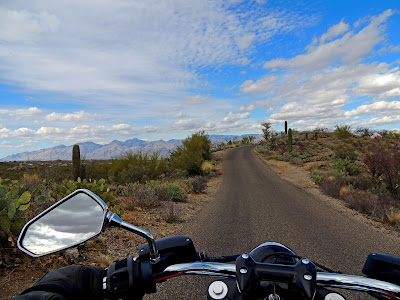 There's two urges for a split personality biker at work here... the hunger to just idle along... stopping when I want and just... Looking... and then his evil twin... That I ALMOST can't stifle; the urge to twist the throttle and go peg scrapin' through the tight little twisties of the single lane, eight mile track! ;) 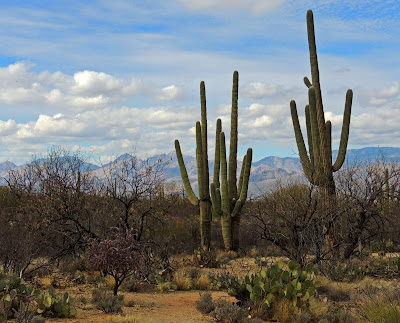 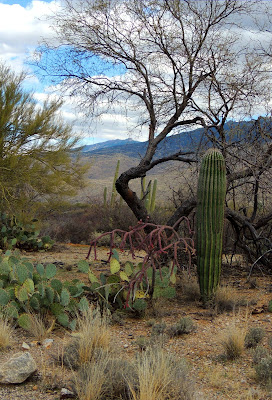 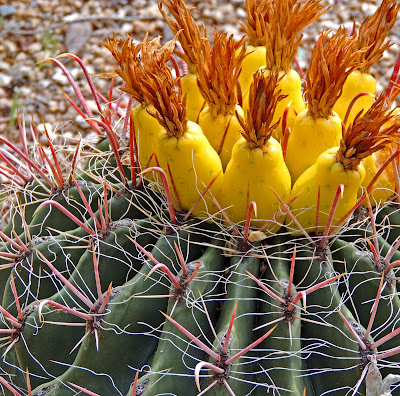 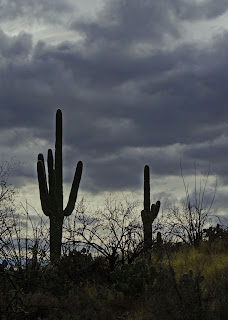 Twas a mostly sunny sky... but a few clouds here and there tried to bully and threaten. But Ha! I ain't skeered! I rode through 3,000 miles of Alaskan/Yukon rain... a lil' Arizona thunder bumper don't hold no fears for me!

So it gave up and just let me enjoy my Arizona Homeland...


Along the way I met and had a couple of conversations with a young fella named James Weir. He's a young photographer who bought his first car... a red '49 the make of which my feeble memory can't hold on to... as a high school kid in 1953! ;)

He showed my a couple pics of HIS rides as a young air force officer in the 60's... a 1958 BSA Rocket and a sweet lil' 283 Corvette of about the same vintage. Lucky bugger's had some fine machinery! 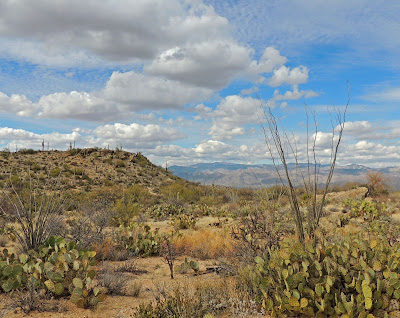 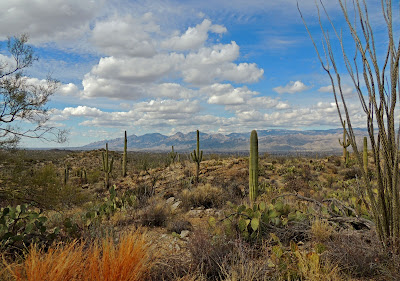 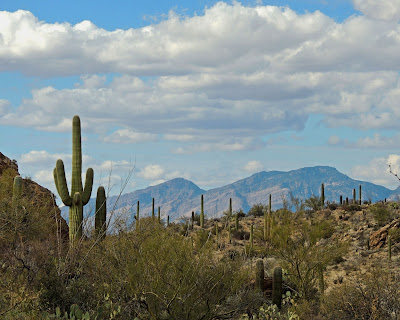 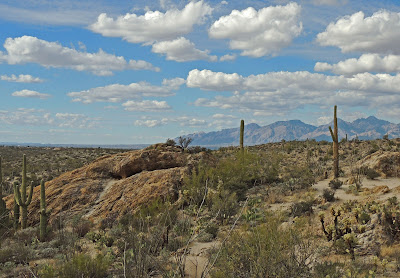 Two guys came pumpin' past when I'd stopped to collect some images 'bout half way up a long grade. The second guy kinda wheezed; "You want a picture of you with your bike?" as he pedaled up.

"Nah" I replied; "Nobody wants to look at my ugly mug when they could be seein' this desert!... and anyway... ya'll are just huntin' an excuse to stop and catch your breath anyway!"

We passed back and forth for the next five or six miles. I'd pull ahead and then stop 'cause I saw a picture... and they'd come pumpin' past.

I believe I'll keep lettin' Yamaha do the pedaling for me! 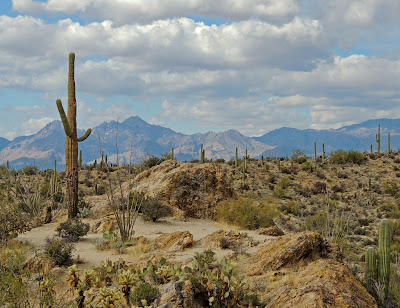 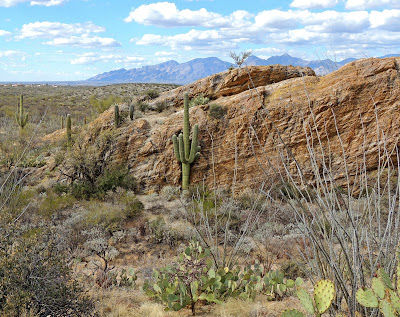 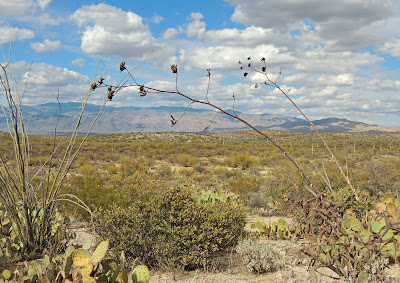 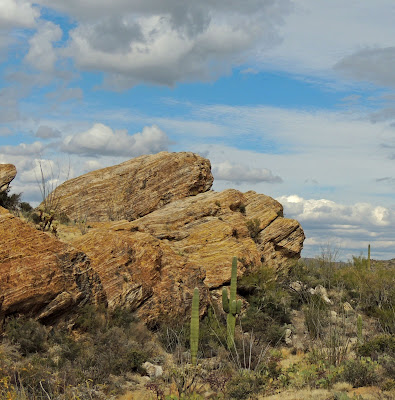 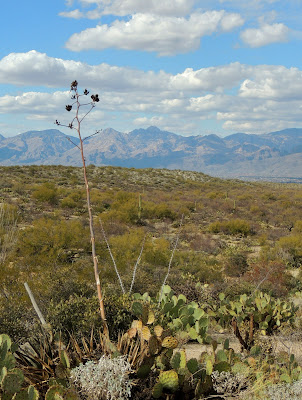 Today? I'm not sure... Likely gonna put 'er in the wind again... cold weather is threatening this weekend so I should probably ride now... and sit inside stringin' words when it's less fine... The paradox is... bad weather tends to collect the most interesting pictures... and stories of what I shoulda done if I had any sense! ;)

In the end... just another day of a boy, poor in coin and rich in life, enjoyin' glorious country that couldn't give two hoots about what your status in soh-sigh-uh-tee is. So don't you give two hoots about it neither! Just get out, put it in the wind... and get to Livin'!!!


Put it in the wind but cover your grin with your hand...

Wonderful photos of Saguaro Park East. Your bike looks really sweet in the desert with the Catalinas in the background. Tell Heidi I said to have fun at the Gem Show. I think I'm going to pass this year. I've already got my quota of rocks that I can carry in the RV. I hope this cold snap passes quickly and you'll be out in the desert again soon.
Grace (in Tucson)

Looks like a great place to either idle along or hit the throttle; problem being that hitting the throttle might include hitting some of those idlers. LOL Well, hopefully not! Sounds like you are in a happy place regardless of the closeness of the community. Have a good one!

Oh my, its really lovely where you are riding and picture taking. So looking forward to being thereabouts this coming Winter. You must really be loving this time because you are soooo mellow!
Keep your ride shiny and don't do any crazy stunts that you might regret....:)

When you first put those hardbags on I wasn't sure I liked them.(not that it matters what I think it's your ride) Looking the pictures of the bike you posted today I gotta say ya done good.