Been layin' around camp the past three days... fighting off the flue. First she got it. Then I made my ride to Phoenix for those specialty bolts to replace my temporary fix... and when I got back Penny Walters and her husband were waiting...

I was Suuuuuuposed to have been back a lot earlier... BAD COWBOY! NO BEER! Well... we had a real good visit and long about five O'Clock they left...

... I took three steps toward the rig and WHAM! It was like I got hit in the gut by a sledgehammer. Heidi had generously passed her flu on to me.

But, In the process I fear I may have been perceived as a bit of an unfriendly blogger.

I figured while we were getting propane might as well get some water too. While we were sitting waiting our turn on the hose an Ol' fella came walking toward the truck, kind tentative like; "You're Brian Gore aren't you?"

"I'm Jerry out of Arkansas! I read your blog!"

I think, Jerry might just have gotten a blank stare from the guy sitting between my ears. Heidi chimed in with something like; "He's not really mute, we're both sick with the flu!" She looked at me and laughed. "I thought there was something wrong with you. Usually you talk their ears off!"

I have to apologize to both Jerry from Arkansas and Pennie's husband. Jerry gave me his last name and Pennie introduced her husband all good and proper. Apparently My brain pan was already debilitated by this vicious little bug... 'cause to my embarrassment, both names have just went pffffffft! But it is an honor to have people come and look me up. Spooky too! I'm reminded over and over again that folks is listening! Sooooo... I better make certain sure that what I say is what I Want to say! ;)

There's been little walkin' and picture collecting in this camp. First off it was dismal cold and windy. Then once that broke... We Broke! Hopefully I'll be up and around a bit more in the coming days... which is a good thing. My dislocated spine can't tolerate too much enforced layin' about or it starts jerkin' and twisting and has me poppin' tylenol like candy.

Here's some pics I took a few days ago after the cold snap broke.

Now I already showed you my lil' rock pilin' exercise from a trip ago... and I believe I've showed you in the past, some of the other rock cairn efforts from other visitors to this area. When You walk out into the desert... pretty much every trail is festooned here and there with lil' rock pinnacles.

No idea what they mean, or if they mean anything at all... we've taken up the habit of adding a rock or two to some of 'em as we pass. They've grown quite a bit! I live long enough and they might grow into some really impressive! ... or not... 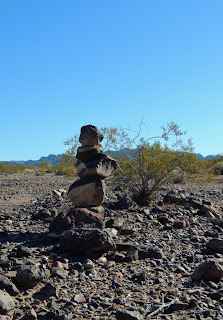 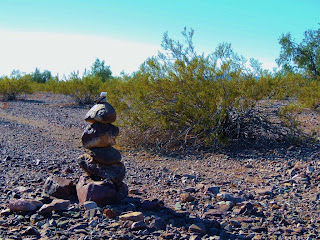 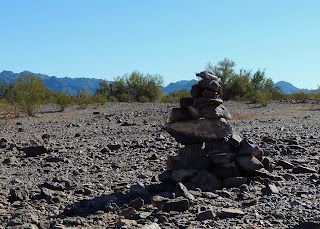 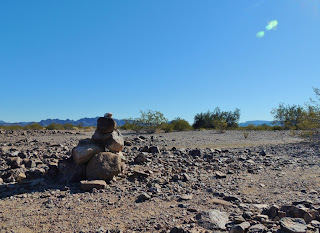 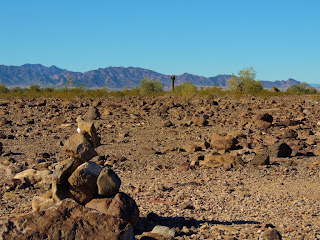 Then there was this guy the night before I got sick...

He'd come flying low along the center of the open area we're camped in. Just as he got to our rig he banked hard right and flew between us and those rigs... but maybe thirty feet from the front bumper of the truck and two or three feet off the ground... Took me too long to grab the camera to get it.

I'm gonna go lay in bed and moan now. I don't know if it helps, but it seems the proper thing to do.

Heidi told me today that I'm not very good at being sick.

Get well soon Ya Old Fart!

Hey Mike
I'm sicker than I was when you hauled me in with pneumonia. So far just bad flu

Had time to watch the happenings in Wash. DC today, hu? Any comments?

Brian, i don't have to be sick to forget names. My husband name is Lenny and he and i both enjoyed our visit.

sure hope you and Heidi get to feeling better soon.

Brian,
Just hurry and get well both of you.
This flu is not a pleasant thing to have to put up with.
I look forward to your blog everyday.
Bill

Brian,
Just hurry and get well both of you.
This flu is not a pleasant thing to have to put up with.
I look forward to your blog everyday.
Bill

Hope you grazing on onions, garlic, pineapple, Mrs. Gras chix soup, and honey, not in that particular order :O)

I can tell you are on the mend. Your blog is showing signs of your good humor coming back. Take it easy. You are too ornery to have it for tooooo long. :)

Brian said...
Hey Mike
I'm sicker than I was when you hauled me in with pneumonia. So far just bad flu

If you're feeling that bad then you need to see a Doctor ASAP. In the meantime do what you can to say hydrated. You were really sick when you finally let me haul you to the doc's years, ago and you were only semi-old then...

Fred; wasn't about to waste my time watching the culmination of a year and a half 6.5 billion dollar dog and pony show.