After Most of a Month in Town Finally Returned...

...To the Far Country where I belong. We landed, out of that force of habit that threatens to become a rut ;) ... in our favored spot along the edge of the RV boondocking area on the south side of Plomosa road.

What can I say? It makes a real convenient spot for a couple of weeks for herself to use the rock shop... and the signal's good for me to get quite a bit of work done on this new laptop... more on THAT in a bit. 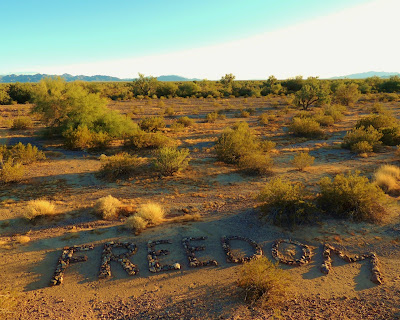 That's pretty much the view out my window in the morning here in Freedom Camp ;) Kinda cool huh? 'course, I took it just as sunset was starting from the roof where I was tilting the solar panels up for the morning sunrise! ... hmmmm... I wonder what nut job coulda spent so much time pilin' rocks? ;) 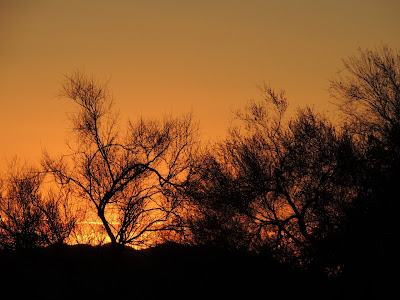 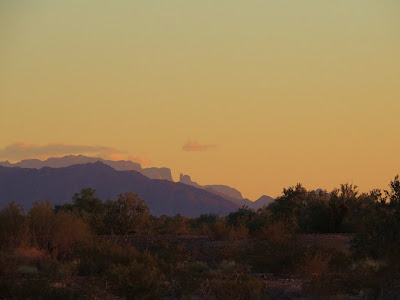 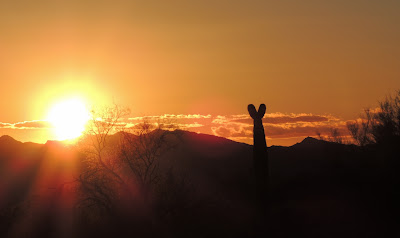 Got here a day later than expected. A few lil' fumbles as we were preparing to haul out set us back a day... one of which was trying to track down some bolts for the bike... it somehow lost one out of a fairly critical spot... and the Biggest Dealership I've Ever been in... didn't have the bolt! ... so... They is ordered! ... "for lack of a bolt the truck was lost... for lack of the truck a battle was lost... for loss of the battle the war was lost...".... DA DA DA DUM!    :) HA HA!

Soooo, about the new Laptop... I've been sortin' my way through this New Toshiba laptop for the past couple of days. As far as the computer is concerned, with it I am plenty happy. It does what it is supposed to and newegg.com did what they promised to, getting it to me...

... Microsoft on the other hand... continues its apparently deliberate effort to be unseated from its position as the supplier of the dominant and premier operating system.What a bunch of bozos.

Windows 8 is a discombobulated, mish mash of two different worlds all shoved together in a dis-harmonious, awkward setup of pretty tiles and confusion.

Here's the deal; Microsoft, apparently, has a psychotic obsession with getting a grip on the tablet/smartphone market that has avoided it... and continues to. Sooooo Micro crap sent out this Thing into the world. I expect, if you've got it on a tablet or phone, using your fingers and flippin' tiles around... for those minimal lil' things that you do on a tablet or phone... it works just fine.

Buuuuuuut... embedded in it is... for all intents and purposes, the old Windows 7. Only, they've taken out quite a bit of the Navigation... and made what's left kind of awkward to access... For those of us actually trying to work... and NOT playing games and fiddling with fooferaw... it's a troublesome, NON inutuitive flub.

Yeah... the guys that told me to steer clear of Windows 8 were right... I took a chance and KERWHAP! :) learnt my lesson one more time.

I'm sortin' things out and can/will over time, make Windows 8 functional/usable for what I do... but a puss gut, biker cowboy fella who just bought the New and Improved Windows 8... shouldn't have to FIX WHAT THE ENGINEERS DESIGNED one more time... should he?

I wonder, do they ever have regular people do a test run on their junk before they shove it off on folks? They might save themselves some lil' bit of difficulty, embarrassment and wraps on their knuckles for playin' the fool if they did! ;)

Soooo... IF... you get a new computer do one of two things. Order it with Windows 7... or ... seek out one of the up and coming Alternative Operating Systems that are Finally, from what I hear, threatening to give Microsoft a run for their money and a lil' competition. Microsoft fired another Dud with Windows 8.

It's cool here on the desert by Quartzsite. The crowds, if they're comin' have not yet arrived. The country layin' about our camp might not be empty, but it sure ain't filled up!

On to my chores... and a good bit of hikin' and walkin'... a month of lethargy, cooped up in town has my busted parts achin' and hollerin'. Time to beat 'em back into some sort of reasonable shape.

Puttin' One foot in front of the other... I'm RV Boondocking for LIFE!
Brian
Posted by Brian at 9:05 AM

Ah, yes! Win8 sort of changes the flavor of a Win-Win situation.

I "early adopted" within two weeks of the launch. Sadly, I failed to partition before installation, in case I didn't like it, and cannot revert short of reloading the world (as far as my computer is concerned.) Shame on me! Nope, don't much like it. The loss of the Start function alone is a major bitch, but I'm going to install an after-market utility to get that back.

Good pick on Newegg.com - I bought a couple of laptops from them around a year ago - service was great, price darned good, and she and I have become big Asus fans.

Rock piling to refocus when your hero of the current literary work is in a jam not yet resolved? Good pick there, too!

Thanks for the continuing good vibes and wonderful pix.
Steven from Monument

Been waiting for your review on Windows 8. Thanks Brian.

hey Steven! Good to hear from you! ;) Thanks for the good words!

I don't think MS has done itself any favors. an additional consequence of their "Thinking" is that I downloaded "Open Office" for the new laptop today rather than risking my $$$ on their over priced stuff. Every time they "improve" something it gets more difficult to use! ;)

I still have the problem of making sure open_office will work with the retailers of my ebooks... but others have done it so I expect I can find my way. They've done serious damage to customer loyalty I believe!

I am very glad for you that ya made it to your spot in the desert.
Beautiful sights and very condusive for you to explore your new laptop, in spite of the Win 8 problems you are learning about. I tend to agree that Microsoft does the overthink and not very enthused to go there myself. I am sticking with Win 7 for now...(Also have XP and laptop is Vista) so I'll let you tell us whether you become happier with 8 as you learn it. Happy Days in the desert til you go Nascar!

Thanks Cindy; Don't know if I'll get "enthused" ;) but generally I get accustomed and forget how ticked I was with something that was (and remains) dumb in the beginning! :)

I had XP and needed no upgrades... just a laptop that functioned. Trouble with the old Dell was that to "Fix" it cost waaaay to much and I'd still be left with a machine that couldn't keep pace with the modern software... Planned Obsolescence (sp?) I think they call it! :)

anyhoo... I'm hunting up a lot of the FREEWARE software that's out there to make things work. Kind of my way of spanking MicroCrud. Yeah I know... Bad Cowboy! No Beer!

Buuut, I expect that what I'm doing is what MS is going to find a lot of folks doing... Looking for Alternatives as the consequence of MS's dumb decisions. Rather than put out the best product they can... they chose to play some sort of game and now the turkeys are comin' home to roost. Actually, I think it's pretty cool. MS is finally gonna get some competition! :)