Winter's are hard on me... not so much the body... but that lil' grey pod rattling 'tween my ears takes a pretty good beating.

When I was lil', and still trapped in the city, I delivered newspapers at ten degrees. Cowboyin' I pushed cows at 15 below, chopped ice at 25 below... fed all day at 115 above in Arizona to waaaaaay below in Colorado...

I've rode my motorcycles at 10 degrees splittin' the wind with a grin, and the wide eyed looks of townies that KNEW they'd seen an un adulterated mind broke idiot !... and come home caked solid with snow...

Weather ain't a fear. Nor difficult tasks or failure. I can deal with whatever comes. Been there, bucked off that bronc... and swung my leg right back over!

But... Time. That there is a tee total different thing.

I can deal with solid, get my hands a good grip on it, "Things" and reality... It's TIME that seems to be the tough nut to handle; The dang thing too slippery to get a decent grip on.

It's sitting Static that brings me to grief. It's like I'm sitting in an open field and I can feel the cross-hairs of Time taking a bead on the bridge of my nose. THAT's a target a blind man couldn't miss!...it makes my liver quiver and leaves me wigglin' and squirming like a cut worm.

Winter is where we, of necessity, slow down our slower way of going... and time stacks up on me.

We work at keeping the miles under control to stretch our meager possibles to cover our subsistence. We use winters to try and catch up a bit from the rambling of summer.

It's that winter, static... NOT goin' down the road so much, that gets to gnawin' sore spots on my liver.

I get restless and cranky, with too much time for schemin', when I've got to go without new visions keepin' my senses busy collecting more mental video clips.

For the UN-initiated... it's those times of unfettered and cut loose schemin' that's generally been the source of much of the excitement along my trail.

Yes sir... give me 'nuff time to scheme up a Really Good Idea... and I'm genuinely over my head in a Deep Sheep Dip! It generally falls within the pur-am-uh-turs of that Red Neck Cliche' of; "Hey Fellas! Hold my beer and Watch THIS!"

Here it is only the end of November and I'm already winding up tight. I'm so itchy I'm stretchin' the pavement twixt here and Bouse at speeds that has the boondocker brushed up under a Paloverde tree along the road asking; "What the hell was that?!!!" when he sees a red blur... and I rumble past.

I've made some hard choices... pretty much forced some arbitrary decisions on that smokin' brain pan of mine with the goal of simplifying things and quieting some of the noise...

Yeah right... quiet the noise... and the wind won't blow in Wyoming, Politicians'll quit their lyin'... and the check's in the mail...

The problem with me remains... Time... too much time. Time to question and wonder and second guess... While a will power that has a feeble ability to Over Power my basic instincts to say; "To Hell with it! Let the chips fall! Let's Roll!" and then just crack out and RIDE! tries to do just that... force me onto a  clear trail... when it's Bushwhackin' that holds my attention...

Ah... the life of a bunch quittin', drifting Rover in a world of herds. 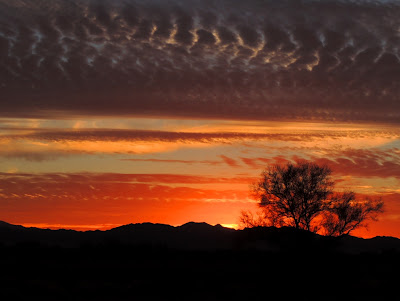 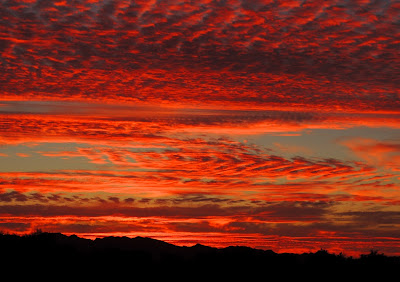 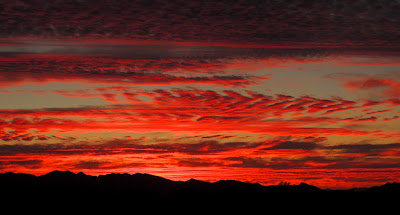 Sunset... that time of day when the mind quiets... and the schemin' slows... you just breathe... and listen to your heart.

I wish they could put THAT in a pill ;) ... Sunsets and Motorcycles... the guy would make billions if he could figger a way to bottle it.

Turn the music on loud to drown out the voices in your head and then take a walk or sit and work on some of your leather crafts or something else to keep your hands busy. But, I agree, I get the same feelings during the long, dark days of winter. I think I usually just sleep more when the darkness comes early.

The future will bring that "pill", Brian. But I'm sorry to tell you that is about the IT dream machines...

Well ya could be sitting here in the Columbia Basin staring at the sometimes freezing fog instead of sitting there on your veranda enjoying those sunsets and riding in those balmy temps to boot.

Grab your Kindle, Brian, or turn on some tunes or both. I've noticed it myself but take heart: by next week, we will be turning the corner on darkest days as our sunsets bit by bit will becoming later. Our sunrises will still be later until January but at least the sunsets will begin to be later next week.

February is hardest for me to deal with. I don't know why but I am convinced it is why it only has 28 days in it.

Try putting some Talcum Powder on that Itchy Hitch of yours :))
I know what you mean tho, sitting around smelling roses is not as easy as it sounds.
Box Canyon Mark

Take some of that time you are so upset about and lean back, pop a top, and enjoy those beautiful sunsets you see every day. Wish I culd see them. Enjoy, appreciate, and be thankful for the fact that you have that time. Thinking about you and Heidi, and being jealous of your sunsets. Relax my friend, and think of all of us who aren't enjoying the sunsets you are, unless you take pics of them for us.
Have a great time. November is bad for me, lost my mom this month, 24 years ago, but seems like yesterday. In case I don't get in touch with you before Christmas, Me and mine wish you and Heidi a wonderful, Merry Christmas.