The last evening before we left Zion for a bit we took our ritual evening walk along the River walk that leads out of South Campground. It's a good way to close out a day. The soft sound of the river flowing by... the breeze in the cottonwoods that line its banks... the Cliffs glowing above in the fading light.

On occasion the critters that share the canyon with us two legged wanderers make a showing as we pass by. 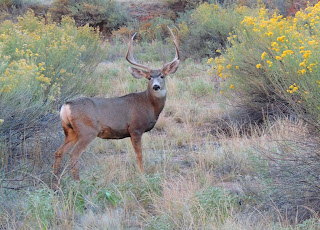 Most of the deer 'round here seem small to me... This guy was the biggest of the lot. still only a three pointer. I suppose the bigger boys are a lil' more careful than this buck who'd made his bed maybe 8 feet from the path.

He jumped up when we passed with the dogs even though they made no sound when they saw him... 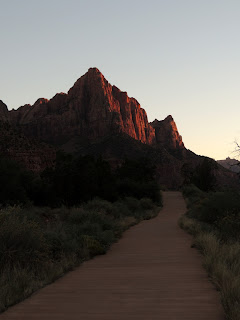 The path along the river is a bit of a respite from the more challenging hikes in the park! Elevation change maybe 6"... as opposed to say... Angels landing of 1500 feet or so? ;)

Well, that and no sheer cliffs or slick rock to fall off!

Coming back into the campground the cliffs to the west of the camp glow above you in the fading light. 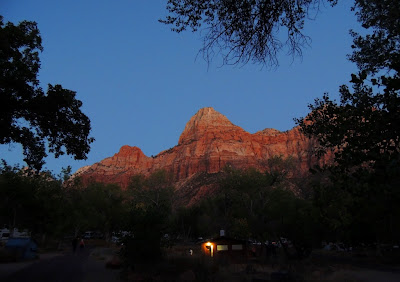 The scent of campfires and cooking suppers in the mostly quiet camp stir your appetite...  It's not a bad way to be...

But I still prefer the solitude of a boondock camp... and in the morning we pulled for such a place.

I had a tip from a Ranger that we checked out using google maps. Pulling up the satellite layer you can zoom in on a prospective camp and really check a place out. Using Heidi's new nexus 7 tablet, the built in GPS guided us right to the spot, even though there was no cell signal much of the way. All it needs is access to the satellites.

We rolled back a bit north to get a last look at Bryce Canyon Before We run for the Arizona Desert. Like the Wild geese from the arctic, we'll run south in about a week to escape the bitter winds of winter that will soon descend on these high desert canyons.

As soon as we got the rig parked and level... which was the most difficult camp we've set up in a while... requiring the excavation of a pair of divots to drop the uphill side of the fiver a few inches ;) we loaded back up and ran over to Bryce to resupply propane and generator fuel. It's that time of year that the battery bank frequently asks for a lil' help from the generator to achieve a full charge. (especially in the camps where puss gut biker cowboys are too lazy to climb up and tilt the panels!)

Since it was also one of the shinier times of day for the making of good photographs we rolled down into the park to get a fresh map and see if there was some photo art to be had. That and the fact that a bit of weather is threatening over the next few days, figured better do what we can while we can. 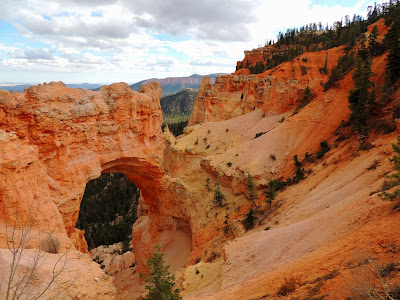 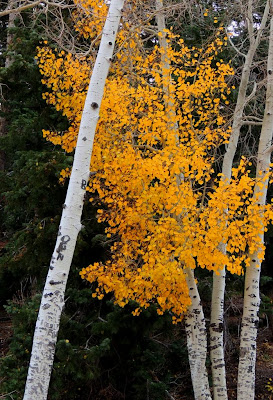 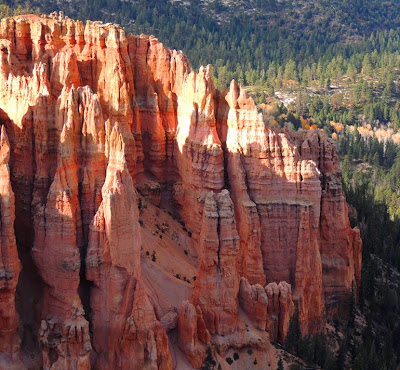 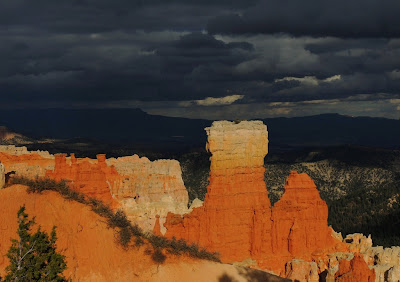 Some of this landscape... you wonder if it'll be there the next time you come by... this bit looks like it would fall in the next breeze... and there was a chilly breeze today! brrrrr... we're planning on staying till Friday... but our thoughts of warming on the desert for the winter may have weakened our resolve! :)

The few miles back to camp were taken care of quickly... and a pretty sight it is, coming back into the solitude of a fine RV Boondocking camp...


The clouds broke a bit as the sun settled behind the ridges to the west... and though it lacked the spectacular color that becomes such a common routine in our camps on the desert... it didn't fail to please... 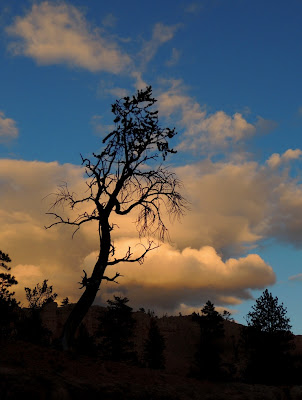 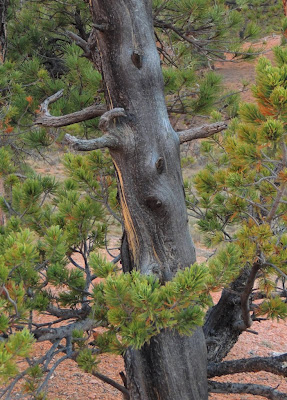 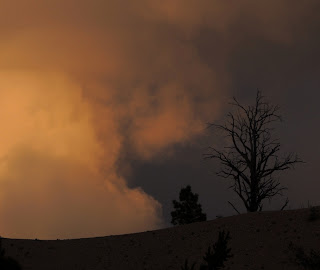 We've a hike or two planned for this week. Then it's back through Zion for a couple of days to cross trails with some good friends from the road ;) ... and then we run for NASCAR and the desert.

Back in the Solitude of a Far Country Camp
Brian
Posted by Brian at 9:50 AM

Brian, that trio of Aspen photo is worthy of a frame!!!

Box Canyon Mark and Bobbie... working our way across Utah's red dirt for a meet-up with you and ms Heidi.