It's the 21st Century... But a Man Can Still Dream of Freedom

Long about 9 miles above the Spring Creek Campground on the Gunnison National Forest, we found a little bit of heaven. 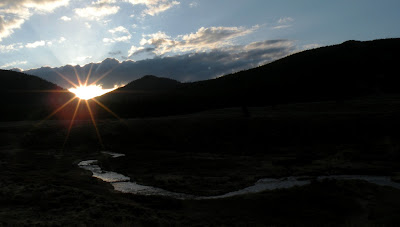 Our camp sits on a bench above Spring Creek as it winds past, headed I believe for the Taylor River. Near as I can tell that meets with the East River somewhere below us to form the Gunnison. If you keep following them down stream... you'll eventually cross the border at Yuma and be eating tacos in Mexico.

But for now, here in these mountains, the only thing I can hear is the gurgle of the stream as it twists and bends below our camp accompanied by the High Country Wind. The only thing I can see is the land God put under my feet for me to live on... and the Peace in my soul when I step outside, close my eyes and just suck in a full, deep, breath.

Our only neighbors are a family of Beavers. 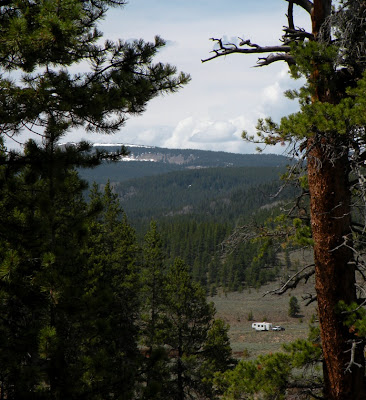 It's a fault in my character, I guess, that brought me here now. It seems that just as the weather clears up and gets warm where I am, some unseen force moves me north and higher.

From the 4500 feet or so back on Ash Creek, by way of Zion to the 8200 feet or so camped on the San Juan. From there we moved north and east another hundred miles or so... and almost 2,000 feet higher.

What can I say? My flaws keep me moving and living in open and far country so how can I complain?

From camp, if you drop into the bottom and cross the creek on a small lil' log bridge you'll find there, you can follow up one of the lil' feeder streams that feeds the main creek. 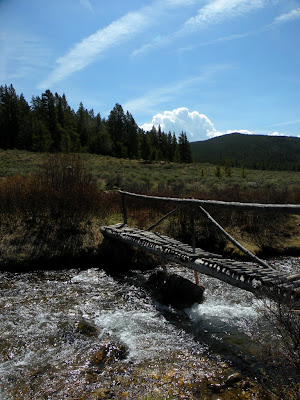 Just about every stream and creek in this area has been corked up with Beaver Dams. Which I'm sure the fishermen are awful fond of, since they make sweet hidy holes to catch the big, heavy bellied trout that you have to fold in half to fit in a pan! 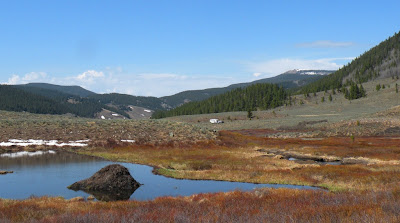 They pose a problem for such as me though. The first thing I think, whenever I see a Beaver Lodge is how lucky they are. And then, that thought tends to twist up uncomfortable knots in my shorts.

Ya See... I don't like bein' considered "Second Class" and just the thought of "Tyranny" makes my liver quiver... My eyes cross, my face contorts... the pressure in my head swells... and eventually smoke and sparks start spewin' out my ears.

Make no mistake... in the Kings "Federal Plutocracy"... "Second Class" is what we are... and "Tyranny" is how it is. We are, in their eyes, "Federal Property". You can spend your time hangin' fancy names on things and labeling the demanded behavior; "Good Citizenship", but that don't change reality none. We are the good lil' drones of the bullyin' Federal massuh.

I for one, weary of it. I look at the Beaver's around their Dens... or think of Wolves and I want the Freedom and Rights they enjoy. 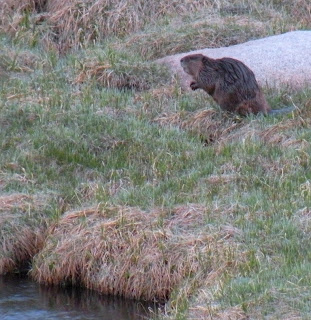 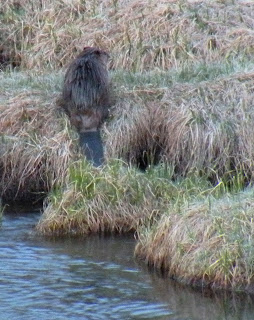 I mean look at it. That Beaver builds his house, wherever he chooses. There's no requirement from the King, sittin' at his desk in a fancy oval office two thousand miles away, for that Beaver to pay for a "permit" from his officers. (Let me drain a wet spot on my own land and they send in the SWAT!) There's no Inspection required... and that Beaver need not pay an annual tribute, to those who claim to be his masters... to LIVE in his own house.

We on the other hand... have to pay tribute just to sit on a rock and have a freakin' pic nic!

Let me go out in the woods and put up a cabin on Gods Earth, where ever and HOW ever I choose... can you just imagine the storm I'd stir up doin' that?

Seriously... Think about it for a moment... They "TELL" you that you're Free... but are you? Can you build your own home? Can you hunt for your supper? Freely?

That Beaver is Free on the Earth; Dependant only on his own courage and skill for Survival.  He has no need for the permission of other Beavers just to LIVE. I admire his Freedom. I am green eyed jealous.

Even the Wolf can hunt as he chooses. No permission must be secured, no licenses required. No season declared. Hell, he's got humans serving as his protective guards. Truthfully, even if the sheep and cattle that parasite is taking belong to me; it is I who will find trouble, if I should interfere with his Freedom to hunt as he pleases.

The Beaver and the Wolf have greater Rights to Life, Liberty and the Pursuit of Happiness than a Man does. The values of this world have gotten twisted. They've been perverted.

"It's Not the Same! The Wolf gets hunted!" the parasite lovers cry. Run on down to the center of Albuquerque, Denver or Phoenix...and walk around for a few hours with a wallet in your pocket. Ya'll will be knowin' a lot greater danger from "Hunters" than modern wolves do! And let's face it... if you choose to defend yourself against THOSE hunters... you're likely to wind up in jail just as fast!

What in the hell is goin' on in human soh-si-uh-tee?

The powers and force of Government, seized by such as the wolf lovers has perverted basic right and wrong. It's Orwell's double speak in the flesh!

I don't want to take from other folks... I only want to be like the Beaver and the Wolf, Free on the Earth. Dependent on my Own Abilities and no one else's.

OK... Back to the Gunnison.

It's cold yet... this high. Our camp is sitting maybe a tall midget below 10,000 feet. Looking at the map I'm speculatin' we sit at 9,900 size 10's above the Pacific. What can I say. I told you the other day that I hunger for the High Up and Lonesome. It's a necessity for the survival of my soul :) Even if Goin' Down the Road is a competing lust.

The air here is crisp and clear. It's scented with the sweet smell of pine and that indefinable flavor of... Pure.

Spring Creek Reservoir is above us, and Taylor Reservoir sits at the top of Taylor Canyon just over the ridge to the East.

I spoke some time ago that I wasn't gon' let Cell Signal rule my life as strong as it has. Well, this camp is an example. If I'd let signal dictate where I put the trailer jacks down... I'd not be soaking in the Joyful Freedom of this camp. When I look at the signal meter it says X _ _ _ _  :) Nope! None! Nada! NO CONNECTION! You is in the 1880's world my friend! 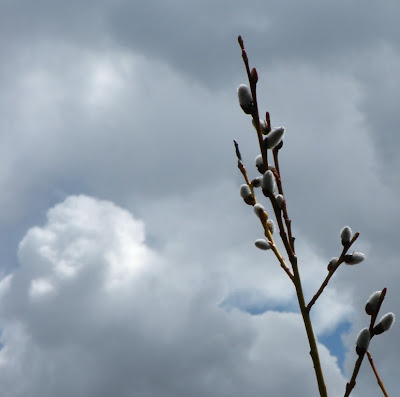 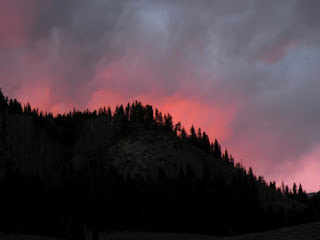 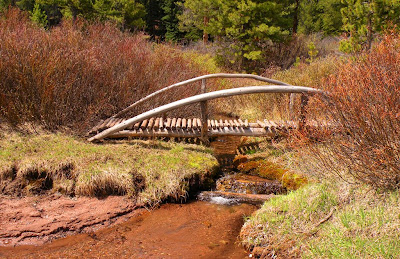 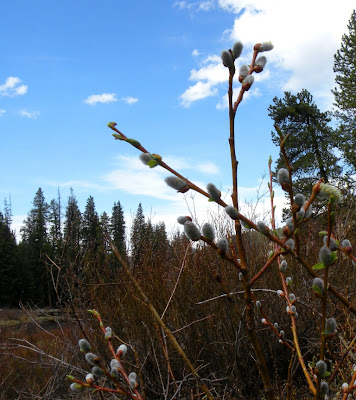 I've found another benefit too. Since I tend to go off in several directions at once... trying hard to multi task and ending up with the confusion leaving me "No-Tasking", having this quiet around me allows my spirit to focus on my "art"... that being the whittling of stories.

The newest book I'm working on got set to simmer for a bit, 'cause my inspiration ran a little stale... I guess.

But now, in this camp, the next and second installment in my "Jeb Taylor" series has caught fire with the inspiration of this gorgeous country. "With the Heart of a Man" is building fast now. With modest luck in finding continuing inspiration in the camps I find, I could have this tale finished up by mid summer... a bit later than my imagined timeline... but then... that's what I get for "planning'!

While I thought my first novel; "A matter of Honor" was a good one... and the start of a second series "A pair of Second Chances" was a far better story, I'm coming to believe this one just might be the best of the three.

Kinda fun to think I've not hit my peak yet! :) I had strung 4,000 words together this morning before we left for our hike! I expect to add a few more thousand as soon as I'm done carving this post! The High Up and Lonesome seems to grease my word whittler.

Ash Fork in Arizona and the mountainside above Sula in Montana had that same affect.

Guess I should hang in "out of touch" country a lil' more huh? 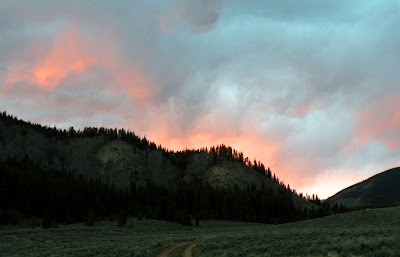 Ah... but it ain't to be. Commitments have us needing to be on the front range by the 24th, so this jewel of a camp shall remain... but we'll be moving along in a few days.

Swelling My Soul in the High Up and Lonesome
Brian

I'm proud of you, CowBoy... for not letting cell signals dictate your path. We'll gladly wait for you to get back to civilization if you'll keep posting photos like these :)
Box Canyon Mark

Brian, thank you for that dissertation. We need to be reminded from time to time how our "freedom" has been whittled away sliver by sliver until the beaver and wolf now have more freedom than we. We have now been on the road for 3 and a half months and my brain is just starting to appreciate the freedom I have clawed back from the "man". Looking forward to your next book.

Can't wait for your next book my friend. Hope you and Heidi enjoy the high and lonesome. As always, beautiful pictures.

We have camped close to there and it is a beautiful area. If you have never visited the cemetery of Tincup, it is an interesting place filled with history. You aren't too far from there.

Shudder to think what that land you're standing on would look like if it was not protected - and how many cabins would be built next door to that little one of yours in the middle of "wherever I please". Your photos, after all these years, continue to take my breath away and so because I am unable to do what you do, I eagerly await each one!
Folowriver