Just When You Think You've Got It Nailed...

You find out that though you'd rather be the hammer... you are in deed the nail!

I woke up Saturday Morning, put the coffee pot to doin' it's thing on that nice quiet solar power we've got stocked up in the batteries... sat down at the table and started whittlin' on the book...

In a lil' bit... sittin' there sippin joe and stringin' words I looked up and didn't really care for what I was seein' along the creek... 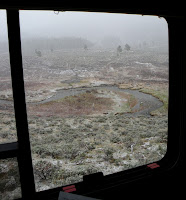 If you've been 'round this rig for any length of time ya'll know that modified, solidified, and de-heatified water... fallin' out of the sky, quit bein' anything I found attractive some lil' while ago!

So... when, in just a lil' bit that stuff started acting like a genuine spring storm... I started gettin' a bit antsy...

Camped up at 10,000 feet stimulated memories of last year. I think it was about ten days later, and nigh on to 2000 feet lower that we woke up on Memorial Day with near to a foot of snow on the roof!

Not having any commo to know what the storm was or what we might could expect...

And, What with having to be a couple of hundred miles east in a few days... I opted to use that greater part of valor that I'm also pretty shy of... Discretion! ... we packed up early and DiDi'd for the lowlands! :)

We figured to roll east, part way to the front range and set a lower camp for the few days we had left before we had to descend into the populated urban dungeon.

Turns out... other things were workin'. The good gal that helps keep us on the road by takin' good care of our lil' store back in Fort Collins, called while we were rolling after lunch and notified us that she had a Family Emergency and needed to Fly out ASAP... If we'd just stayed put to weather the storm... she'd not have been able to let us know and she'd have been in a bit of a tight.

It really was a no brainer. Without her, we'd not be able to do what we do. So... she takes care of us... and we'll darn sure do what we can for her!

Any hoo... We made to head east the rest of the way to Fort Collins... a few days early. I knew I wasn't gonna run the whole way in one day... I just don't run that far at one time any more... Unless maybe I'm on two wheels! :)

Passed a few NF roads... but with the weather wet and those roads not well known to me, and not feeling like karma was smiling I juuuuust didn't feel like testing my mettle and ability to back a rig a mile or three in the mud if the road proved a poor choice... so... we kept lookin' for a night camp.

Long about 4:30 in the p.m. we'd just crossed Wilkerson Pass, we were in pretty country at 'bout 9,500 feet... and along came a Forest Service Visitor Center.

Of course, it wasn't open yet... but the gate was! :) and guess where I found a spot to hang my hat for the night? Sat there till near dark, waitin' for the sheriff or maybe a Forest Ranger to come tell us it wasn't safe for a rig to spend the night in an empty parking lot ;) and it would be better for everyone concerned and soh-sigh-uh-tee in general if we took off pushin' 20,000 lbs down the road Sleepy Driving... but neither Deputy or Ranger showed ;)

Darn! Danged Ol' Bureaurats! I had a whole speech practiced out 'bout How I'd a PAID at one of the self service pay stations... to spend the night in a Forest Service Campground... IF... they didn't have 'em all LOCKED UP! ;)  and I never got to use it! :(

I'm not sure how many nights in a row that is now that our camp rent has been Zero... but... we've not paid a penny since we left Zion... and that don't hurt the budget at all... especially considerin' it had run at something like zero for a long time prior to Zion!


It doesn't hurt to have nice soft sunrises, peekin' through the storm clouds, to start your day off with either... when you wake up after a good nights sleep in your... found just at the right time Night Camp.

We're in Fort Collins for a bit... to take care of veh. registrations, store business, family stuff... miscellaneous other stuff and nonsense... and then... I'm pretty sure I'll be ready to head back into some Colorado High Country... somewhere... and cleanse the Urban Dust out of my lungs!

Back in Over Populated Civilization for a Bit
Brian
Posted by Brian at 10:26 PM

Isn't it amazing how many times something unusual happens to change our plans? And, then to find out there is something out there that is directly related to those changes? Great find on the VC. Hope everything goes well for your main most helper.