We'll be Rollin' On

Time flies when you're havin' fun... and it was nigh on to 14 days ago already that I busted the truck rattlin' over Buffalo Pass. The Forest Service has passed by I'd guess 2 or 3 times a day since we parked.

Though they haven't said a word, and seldom do when you keep a clean camp... I figure to move on 'fore they come and issue the orders. ;) I'll save the pushin' the calender a bit for those times when we ain't quite so visible.

We're not planning on moving far. Just gonna boomerang back around the south end of this range and pull into a spot up on top of Rabbit Ears pass. I don't guess it's forty miles from here.

We're hangin' around in this part of Colorado 'cause Heidi has a Dog Trial the middle of this month in Laramie... and Miss Jillian has her third birthday comin' up the first of September in Denver... So we might as well not burn a whole lot of diesel gettin' far far away and only have to come on back.

We can zig zag around in these mountains for quite a while without gettin' too far!

I loaded the Raider this morning gettin' ready to move camp...

Gettin' things lined up in a mountain camp is the first thing. Sometimes it's a chore to find a spot where the truck, the ramp and the bike can all line up without ditches and rocks and conflicting slopes gettin' in a guys way. 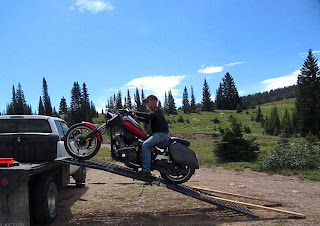 With the headache rack shaved off the truck and those few extra inches of space that opened up; it's a lot easier deal.

What with bein' cross eyed and all, it was gettin' tough sometimes to thread that needle with a big scooter! ;) 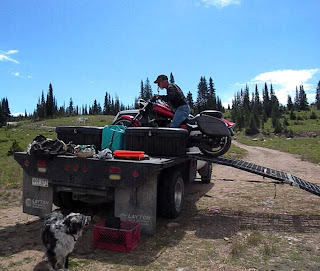 Now all I gotta do is take real careful aim.

It would be best if I don't miss the tire chock bolted down on the other side of the truck. Not sure I got the bounce left in me for too many Evel Knievels!

Buck looks like he wasn't real confident don't he?

Took our last walk from this camp in the afternoon. Not far enough to call it a hike, though we did go far enough to find one of those Lil' Smurf Houses.

Didn't see no lil' blue folks runnin' 'round though... 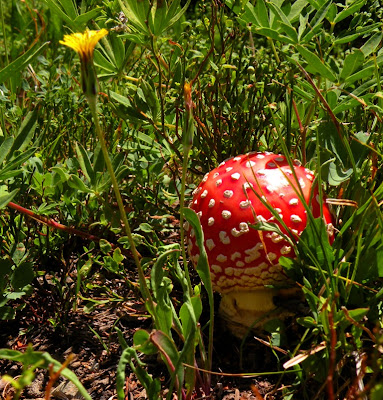 I think maybe Buck overheard we're gonna use a Forest Service camp for the next few days. Seemed like he wanted to get in some rock scramblin' since he'll have to be tethered on a leash quite a bit more for a bit. 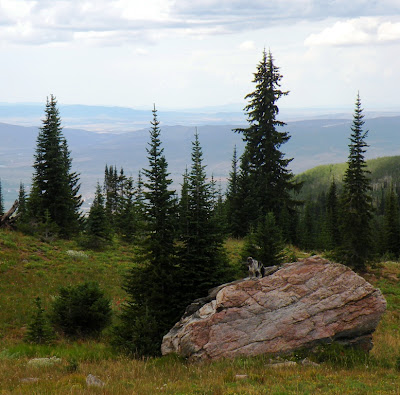 He ran off past some trees and when we came around he was down slope a ways and makin' like a mountain goat.

The nice thing 'bout the next camp is it's gonna be a LOT closer to the pavement... so one particular fella can ride his scooter quite a bit more... without having to grind it over six or eight miles of washboardy mountain backroad! :)

We found some good boondock camps around there... but they were so good they were already occupied! So, we'll set up in a Forest Camp for $6 bucks a night with outhouse and water available and do some Luxury Camping. ;) If I get truly ambitious, maybe we'll pack up and move to one of the full boondock spots we've located should they open up... or maybe if we find another...

The usual storm rolled through in the late afternoon today and setup for a pretty nice 'send off' light show... sometimes the best light shows are the ones that aren't all flash and boom... the soft and easy ones Shine just the same, don't you think? 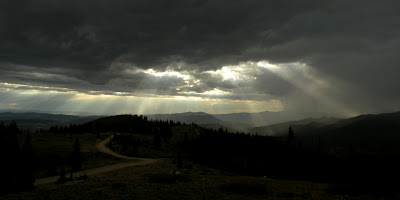 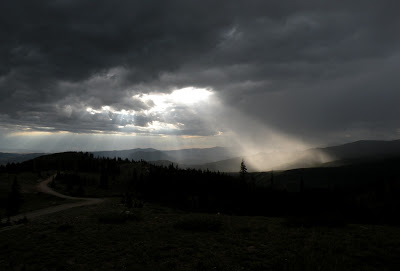 This livin' high is sure easy on the eyes.

Headin' for Rabbit Ears
Brian
Posted by Brian at 10:25 PM