*oops... now I'm sure of it... my editorial parts is sprained from finishing that last book! I just found the "S" that was missing from the title layin' here on the table! A reader sent me a mail that let me know something weren't right!... thanks Jody! ;) *

Obsessing on Wild Country is Good. It strengthens your legs, fills your lungs with pure air and your eyes with visions to carry you over the "speedbumps" you encounter. Obsessing on "numbers" is Bad. It narrows your focus, distorts your perceptions and buries the BIG picture.

Years ago now, when I started construction of my first website, the very first thing I did every morning was jump up and hit the button on the laptop to fire up the computer. While it was booting up I'd put the coffee on. Then I'd sit drinking coffee and searching the reports for the latest traffic numbers.

I kept a book where I logged those in every day... for too many years... until one day (Not so very long ago) I said; "you A.R. bozo! What are you cluttering up your day with numbers for?"

I put the book away and now-a-days I go to that section maybe once or twice a month to see what traffic is doing. (a guy still needs to pay attention to measure what he's doing... at least a lil' bit.)

I figure I either do my job or I don't. I whittle my words and post 'em... folks either return to see if I've sown any more worthwhile seeds or they don't. Obsessing on the numbers isn't gonna do my whittling a whole lot of good.

When it comes to my book publishing... I've had a bit of a relapse. ;) especially with the ease that you can say; "I'll just check real quick to see what's happening."

And so... you end up being one of the pathetic varmints stumbling through parking lots with your eyes glued to the screen of a smartphone... scanning your digits... grinning... or wailing "The End is Near!" while you wobble your carcass out in front of a texting cheerleader driving through the same parking lot in her momma's buick... texting things she shouldn't... to some boy she hardly knows! :)

Not a particularly inspiring vision is it? ;)

So, since I was trying my hand yesterday at some marketing magic (I've still got a lot to learn!) I decided to shut off the laptop, park the phone on the table, and take a nice long walk. What was to be... was gonna do that whether I was playing the fool or not!

We followed a FS road/trail that turns off the road we're camped along. It cuts off a couple of miles above us, and closer to the top of Buffalo Pass.


It turned out to be rather electrifying! 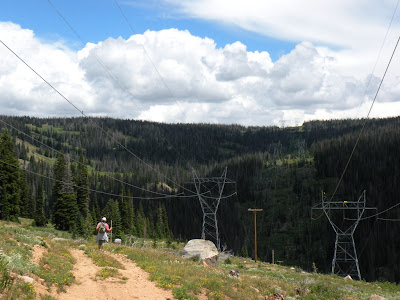 We're up here in wild country and still the hand of man has touched the land. Have you ever walked under a high power line? Whooooeeeee! It's kinda... un-nerving. The lines crackle and sizzle. It's a lil' spooky.

The lines crossed the trail we were following and disappeared into the distance in both directions.

They got me to thinking a lil'.

Wolves and Cougar hunt elk herds into extinction and it's the wild beauty of Nature...

A man defends himself against a charging Grizzly, in the middle of the night, in his home corral...and he's fined $5000+ because he's violating nature.

Is the world out of balance? or am I? 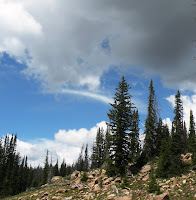 Walking a quiet high country trail is one of only two places where the noise of the world fades away to let me clearly hear my own thoughts and wonderments of this life.

The other being pushing a rumbling motorcycle through the wind! ;)

Either place lets the cares of the world slide away so a guy can just wonder.

As in gypsy yondering... it's not arriving at the destination but the adventure of the journey that is the shining times of it.

Wondering about such things I think likely tempers and helps balance your judgements; when you're confronted by the unending "questions" and decisions when you get back to The World.

There was a high rocky slope we took our noon time break on. The sun up high is pretty warm, even on a cool day. Good Aussie's are one of the few dogs I've seen that have a strong, natural instinct to find shade at every opportunity...

They'll trot from shade to shade along the trail we hike. They'll be waiting up ahead in the shade... until we catch up.

There wasn't much around where we took lunch. Buck found it though... about 25 yards down slope... under a spindly lil' fir... 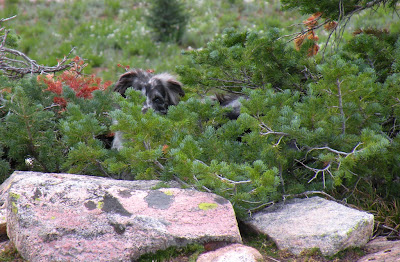 The views in this Steamboat country are "Different" than up in Glacier or Down in the San Juans. Not lesser I think... just different. 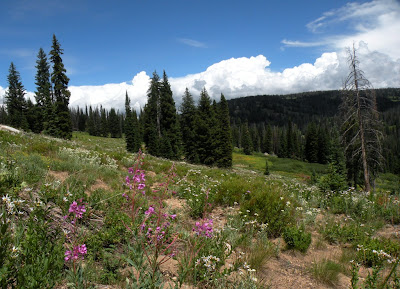 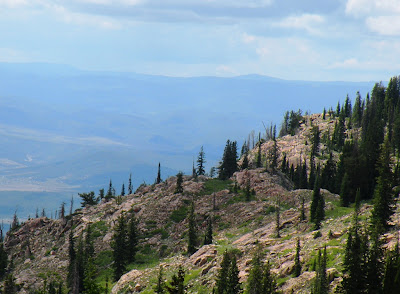 There's something about a skyline like that... an open timbered slope... with the hazy blue mountains behind that stirs my wanderlust and unquenchable, restless, yondering. 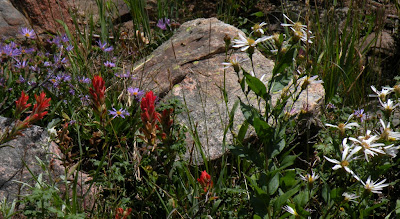 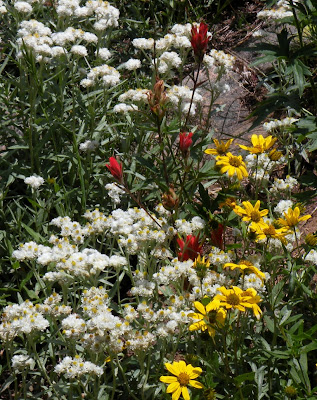 So... about the results of the Jeb Taylor day. Barn burning breakout that made me pass out with surprise? nah...

Successful? Definitely. And so I say to all those who pushed the 'buy now' button. Many, Many Thanks!

While it had been tallying up to be a weaker month in my publishing enterprise than past months... The impact you made yesterday raised it back into a solid Gainer! :) Thank You!

This is something I've gotten pretty comfortable with. A guy can fantasize about being one of the Breakout Best Selling authors... and that's fine. The likelihood of it happening is pretty thin. Those breakouts, in the big picture, are pretty rare.

Compared to the thousands of good writers out there working to present their stories, the Breakouts are a miniscule fraction.

The heavy majority, sell nothing. So... the fact that I enjoy very modest... but daily... sales is something I'm very grateful for.

Better to work toward a solid, steady, enduring readership that just carries along through the years. That is something that can be relied on.

That is what I'm working toward. Simply doing a workmanlike job and producing a "Body of Work" that simmers along at a rate that keeps my backbone from rubbing a hole in the front of my T-shirt! 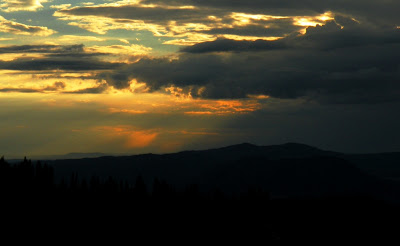