That was a tough haul! Why, we musta gone nigh on to forty miles! ;) It's a fairly long climb out of Steamboat too!

Made our stop at the Steamboat Campground on the way to use the only dump I could locate in town. Looking at the reviews I was thinking that this would be a costly stop... and one of those where you drive away gritting your teeth 'cause the folks are so rude and grinchy... Know what I mean?

Well, you can't always trust reviews of places. Sometimes... maybe even the heavy side of the teeter... reviews are done by people with an axe they think needs grinding... This time... from my experience they were wrong. The folks there are helpful, and for a $7 dump fee, to empty the tanks and refill the fresh water, I can't grouse. So, if you need to service your tanks in Steamboat... the Steamboat campground is just fine.

Got into this camp early afternoon and put the Raider back on the ground. It'll be a lot nicer camp for the bike. The only gravel is the road in the camp itself. The Highway 'tween Walden and Steamboat is a mile or so away, and a bit of asphalt runs from here to there.

Been quite a while since we were parked with pavement that close! :) I just might get in a few good circles from here. HooYa!


Nice big pull through, clean outhouse... water in camp... geeze, luxury camping! :) A lazy old word whittler could get used to such easy livin'. Even if it does cost him $6 bucks a night. Which just happens to be right directly, exactly on what the budget for that is... though Heidi is getting tighter than me and squawks now when we have to pay ;) With both of us bein' so cheap... The squeekin' 'round here is awful.

The only problem with the campground at Dumont lake is... there ain't no lake!? Uh... it's empty. They posted a sign; "The lake is closed for maintenance."

Whatever... there's a lot of sites here... and maybe four of 'em occupied... We took a short walk up the forest road that runs past the camp. Up is the operative word here... Still being at 9000 feet plus or so, climbing takes your wind. That and bein' a gimp that turns 60 in another 17 days or so might have something to do with it. (60 goin' on 12)

That narrow track winds up the mountain through heavy timber climbing all the way... We followed it for a ways and kept sayin'; "We'll go to that next bend and see what's around there..."

May have to run the truck up a ways to see if it ever breaks out of the timber!

There was a camp down near the bottom that tickled memory... 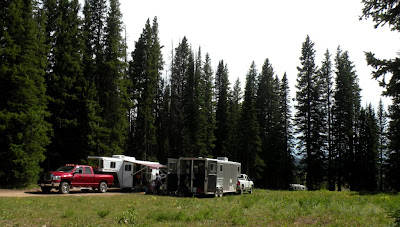 Their horses are tied in the shade just behind the trailers. Not sure they're camped here, though they had tables and such set up. This spot is well inside the 1/4 mile "restricted zone" around the campground... and if you look sharp you can see our rig poking through a gap in the trees...

I've got no heartburn with it... they've got a clean camp... but... the FS might give 'em heartburn.

Scenes like this'un poke my imagination and make me wonder what it would be like to be able to explore that country up around Sula... if we had a horseback rig... or the Arizona desert... Riding on the beach in Oregon would be pretty freakin' awesome! :)

A lot of my walkin'/riding and thinkin' time is spent wonderin' about all the ways of going. Wonderin' not so much if there's a Better way... just... always curious about Other ways. It's not that I'm that fickle... really! It's just... I'm a rover in just about every way... Probably just a candidate to be the poster geezer for Adult Attention Deficit Disorder.

Once I see and touch something... I'm ready to move on to whatever grabs my attention next... kinda like a scramblin' lil' weasel... pokin' into everything... always movin'! :) gotta go gotta go... let's move... gotta roll!... whoooeeeee let's GO! ;)

Yeah... what can I say... no shortage of imagination or curiosity... just the shortage of gold to pay for all the bright ideas and diesel!

Judging by the lack of a skeeter invasion last night... this should be a purty good beer sippin' sunset camp too...

... a nice long view of high meadows to let your vision expand through the afternoon... 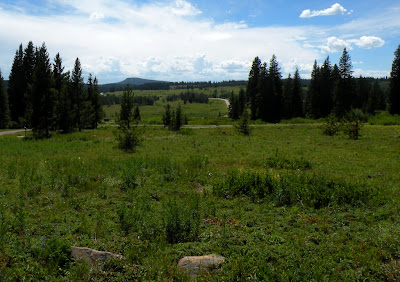 and then a good skyline for some soul soothin' quiet times when the sun does set...

Torn between Ridin' and Writin'
Brian

Laughing out loud when I was reading the paragraph about lake maintenance. That's like when I was at the Texas State Park campground that has a huge spring fed swimming pool that they empty once a year - where do they put all of that water and fish - the pool is full of fish.