I'm getting dizzy. Been chasing my tail so hard I think I'm running into my own backside. So, I took the day off on the 4th to roll the scooter up to the top of Rocky National Park...

I swear... I got over dosed on Moh-rons... What part of "Keep Right except to pass" is so difficult to understand when you come to a passing lane on a mountain road? Seems pretty simple to me. There's a sizable portion of the driving public ~ car/RV and Big Truck ~ that really can't grasp the concept.

So... when the bozos (more than one!) pull out on EVERY passing lane... run up beside the slow vehicle... and then sit there refusing to let anyone roll by, and then brake when the passing lane ends; to pull back in behind that same slow vehicle they failed to pass the last two opportunities ~ I can feel the knot in those discount Walmart Jockeys getting bigger and more uncomfortable.

The nice thing about riding the scooter I do is it's ability to separate its rider from the muck and mire of the learning disabled drivers behind him... with just a small lil' gesture of my right hand. ;)

Yep... 'cause as soon as I decide that's where they need to be, just twist that handle in my right hand and behind me is where the Raider puts 'em... fading into the blaring horns of the traffic their razor sharp intellect and impressive driving skills are stacking up behind them...

...While I climb up into that High Mountain air... climbing out of the front range smoke into the cold rain of a high altitude summer storm ;) ...it's all good.

I'd show some pics but now that the High Park fire and the fire at Boulder and the fire in Colorado Springs are pretty much controlled... Wyoming is dealing its Payback for the smoke it's been choking on... with a Fire of its own up in the Snowies where we were camped... and of course, THAT smoke is coming SOUTH... sheesh!

The end result being that once I got away from the learning disabled drivers and into the high country the rain and the smoke pretty much excluded any good pics. That's ok... sometimes it's better to just pack the camera and ride... or hike! Just seeing the country you're in and not struggling to capture another picture. Too often you do that and miss the whole reason you're there in the first place.

Back down on the plains I'm still wearing out wire wheels on the bed of the truck trying to finish getting it cleaned up for a few more miles of hauling. It's a job I've been putting off since I bought the old toter. The guys that had it 'afore me had a mixer mounted on it I believe... and were mixing, it appears, mostly stucco. 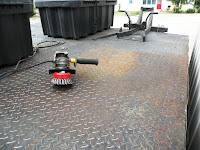 I knocked down the spots where we cut off that overweight headache rack before I started in on the stucco removal.

I've also got to bump that chock over a few inches and then bolt down some new tie downs to improve and simplify how I lock the bike down for transport. 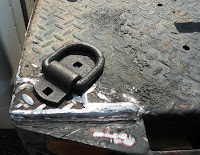 You can see some of that dang synthetic stucco... yet to be removed... beside the tie down loop... It's like trying to grind gooey gum...

The guy the rig went through to get to me thought he'd just put a coat of black paint over the spilt stucco to make it "Look" better. :-/ So, getting the stucco out of all the lil' crevices and depressions of a diamond plate bed is a project better NOT done under a blazing Colorado sun!

It makes it easier to tolerate if I keep mumbling to myself; "I'm not in Phoenix! I'm NOT in Phoenix!" :) while I pour bottle after bottle of water down my throat only to watch it leak out of my hide faster than I can pour it in!

Hoping to button up the clean up today and get some paint on this afternoon...

Got to finish up these chores 'cause I'm planning on hauling up somehwere... come early next week. I've had all the Front Range Refresher course I need to remind me why I left! and I'm Ready to roll!

Finishing up my RV "Housekeeping" and preparing for another Leaving
Brian