Grandkids, High Country and Waiting on Paint to Dry

Got the saddlebags painted Saturday. Was thinking I'd spend the day Sunday getting them hung on the bike... Until I got reminded that this weren't HOUSE paint we put on! ;) It takes more than overnight for the stuff to cure... in fact... it's not fully done for a couple of months!


So... I decided that a "day off" was in order, and tagged along with the ladies and the Grandkids on a day up to Rocky Mountain National Park.

I'd taken a bit of time off from the bike work the other day too and accompanied them to a small water park down in Denver to kool off.

OK Ladies... relax... They failed to get me into anything like a speedo! :) I kept my long sleeves and boot cut jeans protecting my modesty ... and ensuring that I didn't cause anyone difficulty with Temptation! :)

There is still a temptation involved... This "Takin' time off" could get to be habit forming.

This kid might only be a mite over four months but he's 'bout the happiest lil' buster I've seen... and he watches ever'thing.

He's gonna be a fun kid to see grow.

Not sure if he'll be a Saddle Bronc rider... That was the first thing I thought when I heard the name "Jasper".

But can't ya just hear that boomin' out over the P.A. system at "The Daddy" up in Cheyenne?...

His sister now... There is a complete different story! While her brother is a laid back, easy goin' bronc buster in waiting...

This lil' gal is a Holy Terror in the makin'.!

She's got a wit as sharp as a razor... the brains to back it up... and the worst part is... at nigh on to only three years old... She Already knows it!

Lord have mercy on the poor boys that are gonna fall head over heels for this Heart Breaker!

We met 'em up in Estes park this morning. Heidi and I had the duty of watchin' 'em while her Photographer Momma did her picture takin' thing for a while... and then we ran on up into the park.

As soon as I broke my hand free from the lil' bronc busters grip anyhoo! I got a matched set now of these "Thumb buster" pics. One from his sister and now JW. ;) 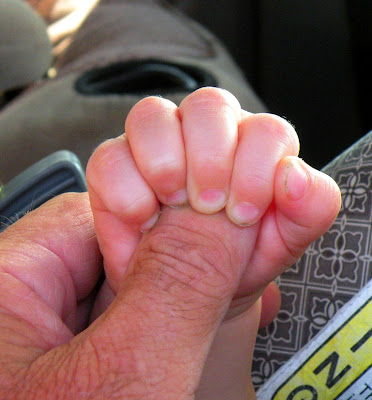 After takin' a short pic nic lunch we made a run up Fall River Road through a lite storm... There's all sorts of lil' spots along there that it pays to stop and take a looksee...


Our stay on the Front Range has been long, but it's coming close to the end... We'll be hauling out... for what looks like a few weeks up into Wyoming... just as soon as I can get the bike finished and loaded back up.

If the paint will hurry up and cure 'nuff... I'll bolt 'em on sometime Tuesday.

AWwww them grandkiddo shots are just too cute! And yes, she sure looks to be a tornado toddler! And he is just on the brink of learning how to TEASE his older sister into a fury!

(I konw, we have two litters of these grandtots about the same ages!)

Maybe it's just the bald head, but Jasper looks just like you, Cowboy :))
Box Canyon.

Karen and Sharlotte; They are great kids... and they soften the difficulty of stayin' along the front range for so long for a guy like me ;)

Mark; You're the second person to say such a thing! Poor Lil' Guy! :)

Cute grandkids! And my first born - also a girl - was a spitfire too. She was definitely a challenge but we always knew she was going to make a mark on this world. My son is also the mellow one - preferring peace and quiet and no frills. On another note Brian I just wanted to pass on to you that I've been following your blog for about a year now and it was almost a year ago from today that you had me convinced that there was more to life than my "9 to 5" government job. I knew there was...but I needed a little push to make the jump. I had just gotten back from a military deployment a few years ago when I suffered from an event that nearly took my life. I was only 35 at the time and it was then that I realized how fragile life is. After the event, I was bogged down by constant hospital trips that were a reminder of how quickly life can change. So after encountering your blog I bought a motorhome (a 1990 fixer-upper) and over the past year my husband and I have been working hard to make it livable. I've already put in my resignation and in just shy of two weeks, we finally start our road adventure! To be honest I'm absolutely terrified and excited at the same time. I have a vague idea of what to expect and know I'm in for a learning experience. I'm up for the adventure though! Brian, I do have one question that worries me more than anything right now and that's how do you live on the road with your dogs? I have two dogs as well - a chihuahua and a great dane (weird I know) - and I worry about leaving them in the motorhome alone. Will they shred everything inside? Will the air conditioning go out and will it get too hot? Will they bark their heads off and disturb everybody within a mile radius? These are a few of the questions I face now that our move is impending. We wonder if we will have to keep one member in the motorhome with the pets while the others go do their thing or look into keeping them in a kennel so that all of us can go out at the same time. Do you have any ideas or advice? Thank you in advance! ~Cynthia Stepp

"I worry about leaving them in the motorhome alone. Will they shred everything inside? Will the air conditioning go out and will it get too hot? Will they bark their heads off and disturb everybody within a mile radius?"

I am not answering for Brian but will tell you what my experience has been.
I adopted an American Staffordshire (Pit Bull cousin) after thinking long and hard about those very questions.
What happened:
1)I left my dirty laundry out and left Patches alone in the motorhome. She shredded ALL of my boxer shorts but left everything else intact. (I don't do that anymore) She sleeps on the couch and has torn up the upholstery where she digs a nest to sleep. (I didn't care because I was going to throw the couch away)
2)The air conditioning issue has not been a worry for me. I try to avoid leaving her alone with the air on for very long.
3)She did bark when I left her alone. I have (I think) broke her of that habit through training and her being with me 24/7 for about 8 months now.

Don't worry, you and the dogs will adapt. The dogs probably before you do because you worry and thy don't.

Dogs in the rig... It's something you have to pay attention to.

When we leave 'em "Home"... we drop the blinds. We put "Big" uncomfortable things on the couch to keep 'em off. There's a "Gate" we hang to block them from the bed...

... yes I'm one of those guys who doesn't believe dogs should share my bed! ;)

We open the roof vents and the windows for ventilation... Heat hasn't been an issue for us. We go north in the summer and south in the winter ;)

We rarely are in "Campgrounds" so if they did bark (ours rarely do) they can't "bother" anyone.

Mostly I think dogs that tear stuff up are those that have stored up energy... so... if you need to leave 'em for long... they need to get out and get some real exercise frequently (daily) to keep 'em from stackin' up unused energy.

That and I've always insisted on "Discipline Trained" well behaved dogs. In my experience, that, eliminates a lot of the "Issues" of dogs tearing things up...

I don't worry about "Heat" since we camp at high altitudes most of the time in the summer... most times they go with us on hikes and such. The only time they are left behind is when we're going where they ain' allowed... or on the bike.

We put the trash can in the bathroom and close the door... we remove what we know to be a "Temptation" and leave a big bone or whatever for each to chew on.

Like Ed said, it's really about training. Generally a pup that's tearing stuff up is having "Issues"... deal with that and you'll not have trouble...

The Terrified and feeling great at the same time is the GOOD part. It's the excitement of getting out of the "RUT" and seeing new and unexpected. The more you do it the more comfortable you become with your ability to deal with whatever comes.

Failure is a common place thing. It's how you learn to not do "It" that way again! and... the source of the BEST campfire stories! :)Enjoy!

We do a lot of the same things Brian suggests.

Having to camp next to an RV all day with barking howling or whining bad dogs is NOT fun for the neighboring campers.

We close all the windows and blinds, and also we play either a radio or tv kinda loud inside to drown out any outside sounds that might tempt them to jump up and look out and bark.

We also have a 12 volt fan that runs on 8D batteries bought at Walmart. So no worries about power going out. We never leave them if it's going to be over 90 degrees.

Also we set up a video camera to film our dogs (2 hour tape) just to see what they do when we are gone! (lots of sleeping, yawning, up once for a drink, then back to sleep)

Ours are a collie and shetland sheepdogs, both known to be "alarm barkers" who sound off at the slightest noise. A flyswatter nearby is a good training device when setting out. After a few nose slaps, they now shut up if I even hold it up in the air. Good double duty to swat flies with too. LOL

Long long walks or runs will wear out a dog before you shut him up in the RV too.

Thanks all! I'm really excited about this change we're about to embark on. We are getting into "crunch" time here with our exodus scheduled for next Saturday. Thank you for the great advice! I hope to be a bit more migratory like Brian and move with the seasons one day - just need to figure out how to do that and make the finances work. I think once we get out in the pool though we'll figure out what's doable and what's not. Moving like the wind is the goal one day :) Thanks again!