Started thinking maybe our curse of last year was cranking up again. Where ever we went along came the snow and rain of winter...

We pulled into the Tonto and the clouds followed along... and a good strong rain in the night. But then... a desert kid don't much mind rain like that, and at night, when you're layin' in bed warm and dry is the perfect time for it. Especially if the sun is shining come the dawn.

It's a lot cooler up here than down on the low desert near Bouse... and a hell of a lot quieter than trappin' yourself in Phoenix or whatever other big town you've made the mistake of gettin' caught in.


What can I say... I'm still livin' on the systems of the rig with no hookups and Maybe I'm gettin' lazy in my old age :) but for $3 bucks I've got water across the road, there's a dump station close by and one of those Personal Dump Stations just a short walk so I can stretch the black tank a ways ;)

I like the Tonto. Both ends of the seasons are softened. It don't get as brutal in the summers... and the winters, though you still get four clear seasons, the winter is pretty soft by Colorado Standards. 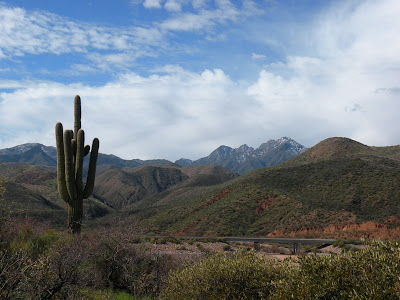 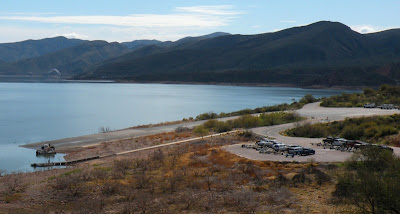 I'll bet there's no a whole lot of pleasure boating goin' on in Montana or Wisconsin 'bout now! :) There's everything from performance bass boats to party boats and Kayaks floatin' around on Roosevelt Lake in February with several places to slide 'em off the trailer into the lake and get 'em wet.

There's even plenty for the Feather Hunters...

This guy was zippin' around in the vicinity of a local Avian Condo project.

Some folks call 'em Saguaro cactus, but this one has been modified so much...

I think it's more of a 'fly in' housing development.

Heidi spotted it when she was out for a walk. A couple of Ravens are doing some remodeling of their old digs for a coming brood. 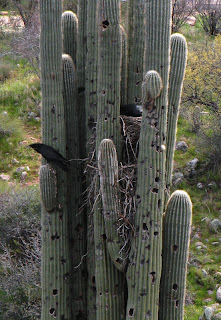 When you look at all those other holes? There must be a half dozen other Occupied Avian Apartments in the thing. I kinda thought they must think it makes the neighborhood a lil' safer havin' those two Tough Guys living upstairs. :)

... until you consider that those two Tough Guys are likely to eat your kids themselves!


... and then, after you miss the picture of the mule deer you spooked out of the Palo Verde thicket behind you when you turn away from bird town...

... you walk up the trail along the hills above the lake and you spot something that makes you... one more time... say... HUH? 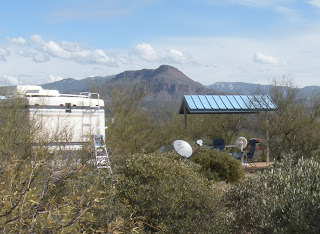 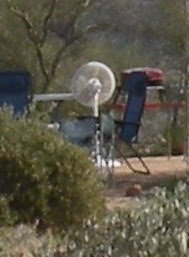 It's generally less than 60 degrees... and if you're out of the sun you pretty much put a jacket on...

And I thought I was an odd sort... I don't scratch the surface of some of what I see. ;)

At least I have things to watch that are more entertaining than the manure salesmen on the boob tube... and much more educational too!

Well, it's back to book whittling and Video carving for me!

Till the Next Time
Brian

What an absolutely beautiful place you have found to stop. Wish I had some of those cactus or is it cacti around here. Keep the pics coming. I am heading for Seattle this coming Wednesday, but will keep up with you on my daughter's computer. Tell Heidi hi for me.

Down here in Florida people use fans to blow away the no-see-um bugs when outside. Gorgeous photos today Brian. Think about getting rid of the word verification from your blog--bloggers recent changes make it a pain in the butt to read and now it is two words instead of one.

Your photos have a texture that reminds me of old classic Arizona Highways magazines. Beautiful.

Sharlotte; Heidi says hi ;) I'm trying... but starting to think I've pushed the button on this camera too many times, it's acting "old" ;)

Janna; Hadn't thought of that. I can' think the "bugs" here rise to that level! I'll think about the Word ver. The problem is, if that's removed, Spam bots start invading badly... started having that a few years back...

Gumo; Thank You! That is one of the best compliments I've ever had! :)