Views Along Our Tonto Trail...

My head is all swelled up. Not sure it's deserved, but I'll take the compliment! :) That being Gumo putting my efforts at recording and sharing our wanderings photographically, and Arizona Highways Magazine (especially the OLD ones) in the same sentence, let alone comparing the two! :)

So... back to the Tonto. If you leave out of Cholla Campground and roll south a few miles (well... sort of south, SE?), over the bridge and past the damn you'll find the Tonto National Monument... and ruins of the Salado People who wandered this high desert a long time before cowboys swapped 4 hooves for two wheels and Coors for Landshark! 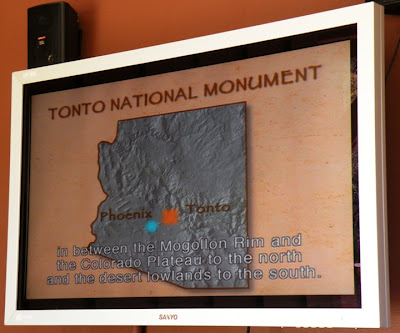 The first part is the usual visitor center with a small museum setup and a video... but the best part is the Arizona desert itself. Behind the Visitor center is a steep but short (with plenty of benches for those needful of 'em to catch their breath) paved trail that rises to the "lower" ruins...

There is another trail you follow to the ruins farther in and higher up, but you have to be escorted or guided to that site... they go a couple of times a week... we may tag along... but I already offended one of the Volunteers, so, Heidi may have to take that one herself while I remain here and work! ;) (what can I say... he made a comment that the wolves in Yellowstone were whacking the coyotes... you could almost hear Heidi's eyes roll back in her head ;) THAT punched my buttons! ... "That's not the ONLY thing they're decimating" I started in ... uh... he wasn't pleased!)


It always surprises me for some reason, whenever we get back to Arizona... Not in town anywhere, but out here... where the sky and the mountains are wide open and Free... that I look around and recognize that easy feeling of Being Home...

It's a nice lil' stroll, steep as it is... so take your time... there's no hurry, none at all. Fact is... don't concentrate on the ruins... look around you... look back... there's gorgeous views of Arizona many never bother to see (from the number of people I saw drive into the lot and then pull out without climbing up the trail) and there's views you may never see again... 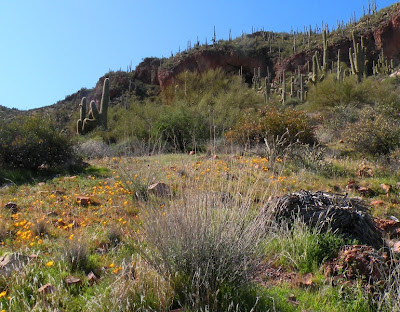 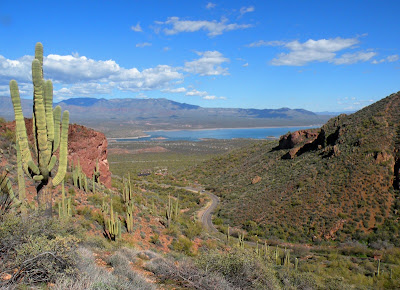 Stop... turn around and look the way you came... Just... Look. Breathe... Print those views on your soul... I wish I'd done more of that when I was younger. There's a whole lot of Arizona that's been lost under a sea of asphalt and concrete... gone forever.

It remains only in photographs and memories...

I remember a man telling me, before I left for Alaska; "I hope you like trees."

"Because that's all you're gonna see. Miles and miles of nothing but trees!"

THAT left me astounded. Talk about Not being able to see the forest for the trees...

I see a similar thing down on this desert. So many people describe Arizona as a bleak and desolate place. I wonder; "What Arizona were they talking about?" The one I grew up in, the one I wander through now, is full of rivers and lakes, birds, snakes, Mule deer and Javalina, glorious mountains and soul searing vistas.

Bleak, barren, desolate wasteland? Sorry. No. The desolation, sadly, is behind the eyes of the beholder, NOT in the land that shines in front of them. 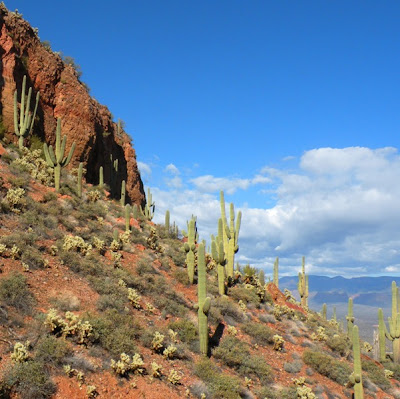 I love this land in a way that's hard to describe. Not in the giddy, excited way of a couple of teenagers stealing the forbidden fruit in the back seat of a chevy...

... but... in the easy breathing, content feeling of knowing, when you sit on a rock... looking out over the Tonto Basin... This is my Home.


The Archeologists have wondered for a long time, why these people left... why all the cliff dwellers seemed to suddenly just pick up and leave.

I often wonder the same thing about myself... Why do I suddenly pick up and leave? I'm in a place where I am happy and content... and suddenly I'm not... Suddenly I have an urge to roam, so strong nothing can resist it...

I wonder if maybe that's all it was with these folks? Was it that all they wanted was to see what was over that far off ridge they'd never crossed? So the went to see and simply never made it back?

But now... a lil' off the wall cowboy tangent, for all you dyed in the wool minimalists out there...


If you're reallllly hung up on simplifying... get to it! Toss that fancy food processor and go natural! Yes Sir! A sand stone Food Processor with replaceable  Granite blades! ;) That's what you need!

So... the gimpy cowboy biker is strolling around these old digs... offending federal volunteers and polishing up his soul with the Wonder of Arizona... and he hears a distant rumble...

... and then spots, coming over the ridge and banking out in front of these old ruins... something you don't really expect to see in Arizona... 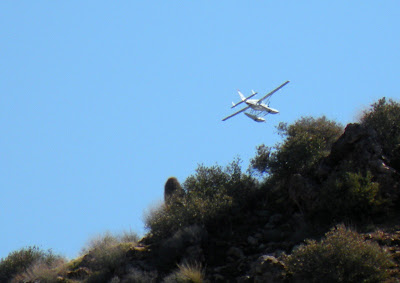 A float Plane! ??? I thought for a second I'd made a wrong turn at the Tonto National Monument sign and landed in Anchorage! :)

But all you gotta do is turn your eyes a small lil' bit... and you regain where you're at... 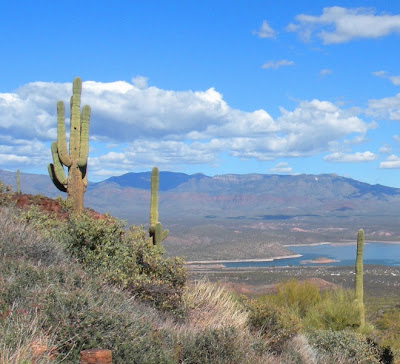 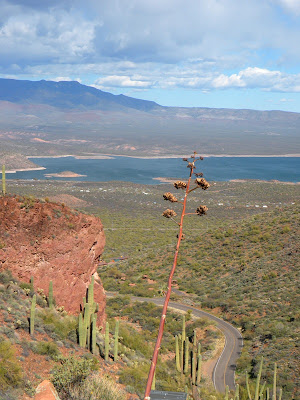 I watched the people, going up and coming down... Folks in our world are too focused on where they're going... and not enough on where they are. You see it everywhere.

You stop to soak up what is right in front of you... They stop as they pass. Their eyes lift and they ask; "Is it much farther?" You reply; "Nah, just a lil' bit." They say Thanks. Their eyes return to the ground at their feet and they continue trudging up the trail... Blind to all that lays around them.

I heard one old woman yesterday; "Too bad... there just isn't time."

Really? Where are you going in such a hurry that it won't still be there when you arrive? Life is too fleeting to spend it rushing on past... because there Just isn't time!


It takes a conscious effort to break out of that. To Stop and Smell the Roses. It takes deliberate effort to form new habits... but I Vow... It's worth the effort.

Sticking my Nose into Arizona... and Smelling the... Tonto!
Brian
Posted by Brian at 8:52 AM

Keep offending those federal volunteers! The Billings Gazette had an article which said the wolves have now started to go after the buffalo. And, Brian, consider getting rid of that stupid word verification--Blogger has made it a pain to use!

What you describe with the other hikers is why I now travel and hike alone. I can't keep up with others' schedule and agenda. I'm always huffing and puffing, looking at my feet just trying to breathe. I fine that when I'm alone I can go at my own slow pace and stop and look around when I want.

Now, to try this double jeopardy that everyone hates so much. Don't have the thing on my blog, and don't get spam. 'Course I'm not a fancy official published author like yourself. :)

A novel post, CowBoy... as in a book :)) It's hard to turn the spigot off when one is surrounded by such beauty... and then there is the scenery (your welcome ms Heidi :)).
And over in the Indian Museum near Cottonwood they have a woven wrap that carbon dates back to the 1400's. Their are markings on the back that roughly translate to: "Not all who wander are lost."
Keep on stirring the pot.

Wow, that is some beautiful land.