... Prowling around the back roads.

The Arizona desert is laced with dirt roads and two tracks that lead to... ??? No signs, no idea, other than maybe a Forest service road number where it leaves the pavement, or splits off from the track you've been following.

We ran out into the desert climbing away from the basin floor yesterday and the day before. When we're taking advantage of $3 NF camps in an area we like, we'll do that a lot. Prowling up narrow and inviting trails... that might offer a nice long full boondock camp.

I still consider the camp we've got now to be boondocking... no hookups, we're living on the systems of our rig... but with the luxuries of water available in camp, as well as outhouses to stretch our tanks. Luxury Boondocking!

This Cholla Camp even has Solar Heated Showers... Well, IF ... you beat the others to the hot water it does! ;)

Anyway, we spend time hunting the back roads and trails for likely places to set a camp if we wanted. That's how we found great camps, up a one lane logging trail near Sula,  and most all of the others.

So... we'd found a spot that might work for some time in the future and had stopped to let the dogs run while we poked around checking it out...


We walked up the track not expecting to find...

Well, if you're not paying attention, you tend to miss things... if all you see is rocks. But, if you stand back and notice "things" 'bout those stones, a whole new panorama opens up. 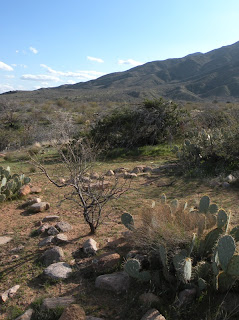 These stones aren't just scattered randomly 'cross the ridge... You might could say they were organized.

When you stand back and looked, they're laying in nice lines with right angles...

We looked around and suddenly something like a dozen or more rooms appeared in the brush and grass...

You could see where sections of wall had fell over, where walls had been piled up at the edge of the drop off and the floors leveled...

It was kinda cool to feel like the first ones to have found this spot... of course, the turn around tracks of a few hundred jeeps and such gave the lie to that idea... but it was fun for a minute!


We poked around for quite a while. There was quite a lil' apartment house built on this ridge high above the Tonto. This country is littered with ruins. They're not all in the Monument.

One thing that bothered me though was finding a few stones that had been moved/upturned in the very recent past. I wonder why folks can't just leave things as they find 'em? If just ten % of the people finding this site do that... It will soon vanish... Vagabonds wandering around and exploring need to learn to do what you Teach your kids in the store... "Hands Off!" 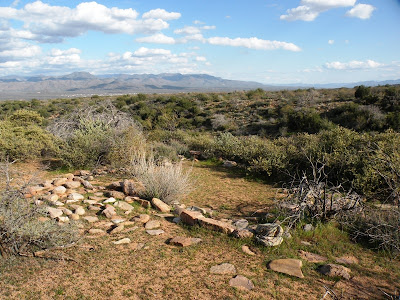 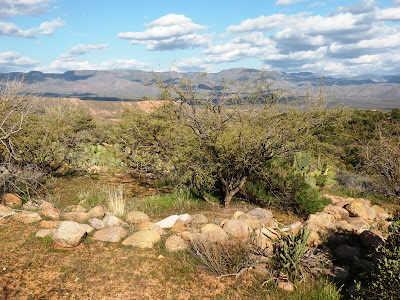 The first one we found was off by itself a little ways. I first thought it might be the old remains of a cowboy line camp or something from the days this was a heavy used cattle range... but a few more steps and we were into the main site and it became obvious that it was quite a bit more than just the remains of some cow camp. 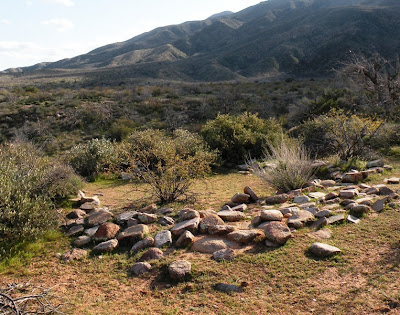 There's another bigger ruin up on a high knob, a bit south of this site we'd found. Once we'd been told about it I looked and you can actually see part of it, while standing in the Cholla Camp, with binoculars... the last remnants of a protective wall... We may climb up there tomorrow or the next day... Have to see how my ambition holds up.

... There's lil' bits of history and living to find unexpectedly, almost everywhere, if you take the time, and keep your mind open to see 'em.

One thing 'bout backroading in Arizona... The bridges aren't much to speak of... 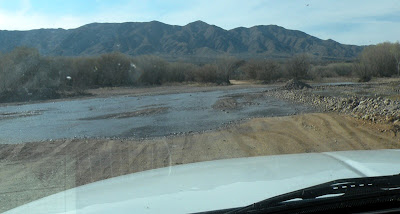 You might want to reconsider using a Prius as your back roader. I'm pretty sure you'll not find me fording creeks on the Raider neither... and stay light on the throttle... diggin' in those back tires... in the middle of Tonto Creek, is not gonna shine up your day any!

Rattling Around the Desert on High Dollar Diesel
Brian

p.s. I know, because it irritates me too! The Word Verification gizmo to leave comments is a genuine, unadulterated PITA! I was going to, at the urging of a couple of people, try removing it for a bit... and see how bad the spam got... well... either that isn't possible or I'm a fumble fingered, word whittler... 'cause I can't find anywhere in my controls... that I can eliminate that lil' agitating gadget :( so... I guess we're stuck with it.
Posted by Brian at 9:20 AM

To turn off the word verification, go to settings, comments, and about half way down is Show word verification for comments? I set it to no. I'm starting to feel neglected, I don't get spam. :)

You may have to turn "old Blogger interface" on to access the settings for word verfication. Rick explains how to do it all here.

P.S. Annie is busy looking up the blue book on our Prius and I HOPE YOU'RE HAPPY.

Shadowmoss; I hope you continue feeling neglected ;) spam is a pita! :) but, you're never forgotten!

Wapiti; Many Thanks. I hope to spin a lot more of 'em.

Good luck Duck; You were exactly correct. I went back into that "old interface" and there it was... so we shall see if I don't get spammed into consternation and liver quiverisation! :)
... oh and... sorry 'bout the car thing... maybe you could just look into flotation tires and a waterproof battery... or is that a waterproof electric motor? :)

I bought "A Pair of Second Chances" a couple days back and finished it the same day. Thoroughly enjoyed it! The only question I have is, why did you bring all of the thugs to my back yard? If you ever come back through Helena I have a place for you to hold up for a while.

Montana RV; Thank You! Why did I bring 'em to Montana? Well... I knew that there's still a few places left where they know what to do with such vermin... and I figured there's still a few of the boys 'round in Montana that know how to do the branding, ear notchin'and Culling! :)