A couple of years ago I did a repair on the tub floor in our Jayco. I was hoping to squeeze a bit more life out of it, before I had to break down and go though the gyrations of a complete RV tub/shower replacement... That's a task I'm not looking forward to.

Well, that repair failed a couple of days ago, with the epoxie I used to seal the crack...Cracking...

... and... you guessed it... I'm still not in a place where I'm ready to do that replacement... too many other irons in the fire and too few pieces of green paper in the wallet... so... another... "service stretching repair". :)

I did it a lil' different this time.First thing I did, after scraping out all the old repair, was open up the cracks with a drill bit, to allow better penetration of the Epoxie putty... and hopefully, an even more durable repair...

Before I put in the new epoxie I went in under the tub with a couple of pieces of 2x4 and braced the floor a bit. A little too much flex in the PVC floor of the tub was where the trouble came from in the first place.

With the floor braced up better I mixed up the putty using a JB Weld product, JB Water Weld, and went to stuffin' epoxie.

Pretty easy stuff to use... just wet your fingers ( I cheated a bit and put on latex gloves, but still wetted them) and fold the stuff over and over until it's one consistent color... 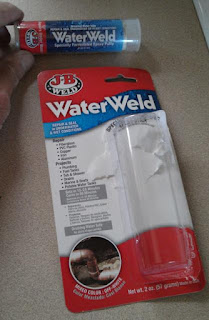 Then, just stuff it into the cracks and shape it up.


You can't see it in the picture, but there were a few cracks developing around the opposite side of the drain, so I just laid a ring of epoxie around and over the whole dang thing...


Pressed and patted it down so it's reasonable smooth... with any luck at all , it won't leak.


It ain't pretty... but... it's a lot better than water streamin' down under the shower floor!


Maybe my newly published lil' suspense novel, A Pair of Second Chances 'll have me takin' lunch with JK Rowling soon, and you'll find me Boondocking in a Five Slide diesel pusher driven by a chauffeur and pullin' a trailer haulin' my Hummer "Back road" car and my motorcycles! ;)

Now wouldn't THAT just twist a knot in the shorts of all the folks that lust after tiny rigs!? :)

Me? I'm doin' what I HOPE is evolving... Look, I've made a lot of comments over the years, that a lot of people could take as me sayin'; "This sort of a rig is good, that sort of a rig is bad"... But here's the deal... The ONLY person I can make any sort of a determination like that for... is ME.

And at this point? I've lost any sort of an idea of what I'll be runnin' the roads with in a years time... so...

For me or anyone else to try and tell you what you're doin' is foolish or wrong is WRONG in itself. Now, maybe sayin' things to try to get ya'll to think for yourself, and step out of the Box that society tries to herd you into... to point out how you might be, being controlled by peer pressures and political correctness is OK... but for me or anyone else to sit and tell you... "This is the sort of rig you should get, or THIS is what you must do... and if you do ANYTHING ELSE, you are foolish or ignorant... would make me or anyone else tellin' such a tale... THE FOOL.

Do what toots YOUR whistle. Hike, Bike, Travel the tourist traps, or the un-occupied back roads. Do what others think foolish. Grin at the things that make YOU Grin. Shake your heads at the people who "Know" what's better for you than YOU do!... and if I or anyone else don't like it? Smile, pat us on our collective, arrogant heads... and say; "It's OK Brian... One day you'll grow up and get a clue!" :)

With the repair done... and just barely I closed up all the windows and vents as the expected dust storm come a whuppin' in... Yuck... you could smell it hangin' in the air 'fore the wind really even got here...

It whipped for a few hours... until mid evening a soft rain came on behind it, and settled the dust and freshened the air... Nice...

and then the rain got softer and then it got softer and finally, around midnight... it was so Soft on the roof, I thought the rig was gonna float away. :) yup... it POURED. I looked out the window when it finally shut off 'bout 1 am. We were sitting in a small lake, of 'bout a 1/2 acre.

With any luck, the ground will firm up around us, before we try to drag the rig out tomorrow mid day, to head off for PIR and our NASCAR week. ;)

If there ain't somethin' goin' on... You probably ain't payin' attention
Brian

That looks like a good repair, Brian. Not like you're gonna spend alot of time in there or have too many guests to 'critique' it. Bracing the floor was good thinking,too. You're just right in the handy man category and know what your limits are. LOL Now, if you can just get out of the lake tomorrow......