What to Talk About... Goin' in six different Directions these days...

I'm at one of those places where so much is goin' on inside my head and outside around it, that I'm kinda cornfuzzled and discombobulated. I sit down here and have no clear idea of what I should be punchin' the buttons to say... So I'll just go to tappin'... and see where we end up.

Went to the Wedding Saturday afternoon of one of the most precious friends a man could ever have... and it was good to see the smile back in her eyes. 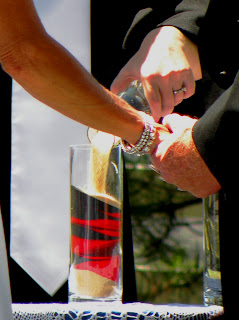 It was Shining Times for sure and for certain.

Considering the smile that I saw, that David put in her eyes, it's a certainteed joyful future they've got ahead. Awesome!

It was good to see and visit with people I've not seen in quite a while, who all came out to celebrate Terry's day.

I can tell you, no one deserved that day more than that Lady. Shining Times... More than one tear shed, for sure and for certain. 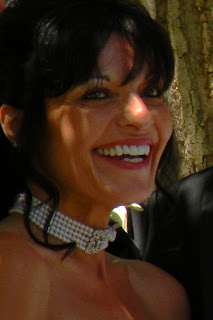 The only "What the Hell" part were the texts we were getting through the evening... from our daughter... "Where are you?... Are you STILL partying?... I'm worried, you COULD BE IN A DITCH SOMEWHERE!"

Oh, is it SWEET to put THAT shoe on the other foot! :)

So... got up the yesterday morning to ride the Raider with Josh on the Custom Harley bob tail he's just finished. I got to be his gas station, carrying a couple "just in case" fuel bottles in my saddle bags. That '82 Sporty he's riding has an itty bitty fuel tank. :)

Aw it was cool and nice winding through the twisties up in the mountains. Had breakfast in the lil' Sit-N-Bull Biker Bar just up into the hills. It's been a while since I sat at a the bar, eating pancakes and bacon at 9 in the morning while the guy just a few stools down was starting his Sunday off with a beer... :) ... uh... That IS just a mite early to Pop a Top for me... even on a hot day!  :) 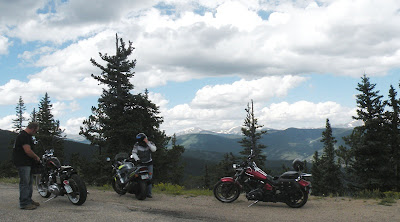 We took a break or two here and there, to give Josh's behind a respite from that Ol' Hardtail Harley :) ... and take in the view...

... which ... gave me the opportunity to capture the perspective of road kill... just before gettin' introduced to Goodyear! 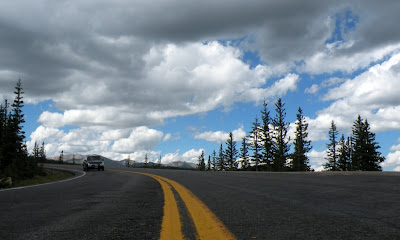 :) What can I say? I can't just let everybody else be the ones doin' the silly stuff! I just wish I coulda captured HER EYES... when she rolled past! :) A bald headed cowboy biker was NOT what she was expecting to see 'round the bend!

Of course... Knowing it was HOT back down on the flat lands below... it just made good sense to stop for a bit, cool out and rehydrate... and in Idaho Springs is a lil' place that was just perfect to take care of that chore.

... and ya know, there's just no sense in walking clear across a parking lot, like Josh and Johnny did... when you can park right in front of the door! :)

But we did have to come back down out of the cool mountains above Denver, to the Hot flatlands... and oooooffff... I'm ready to head back for Montana, and on to Butchardt Gardens even!

Which we'll be doing, some time Wednesday, I believe. Just a few chores to finish here along the front range and then it's back to pickin' 'em up... and puttin' 'em down. :)

Now... on to other things... I changed a setting, so that more posts show up on the blog home page... I've always had just two... I changed that to seven... any opinion or feed back on what ya'll like?

Another direction my heads goin'... and already has several times in the past, is Rigs. Readers here for a while probably understand that when it comes to Rigs/RV's I'm... uh ... "Restless"... Some might call it... fickle. Always lookin' at the "Greener" grass sitting on that Other set of Wheels. :)

Now, I don't think sayin' I'm fickle is fair. I've been draggin' this Eagle 'round for ten years! But... I have been and continue thinkin' 'bout Rigs that would work Better for us...

... and the direction I'm leaning just now, is likely to have the Artful Blogger slappin' his hands to his face in shock... and sputtering in surprise; "Oh No You Did-dunt!" :) I'm not gonna tell you what the crazy buster is up to, or might be... and it won't be happening in the short term... but... maybe this winter? :) gonna keep you in suspense!

I better go see if I can corral a few of my multiple personalities and get something else accomplished today...

Return to the main site of goin' RV Boondocking or Visit my Sister website Motorcycle Touring on Freedom Road
Posted by Brian at 9:36 AM

I have a dumb question/observation. Why in the h$ll do the homes in the Denver area not have A/C? Visited my brother and sister-in-law in Longmont, in August, no A/C and none of the homes on their block had A/C and it was just as hot and miserable as Kansas. Of course, I have the same question for folks from Michigan. It's hot, it's muggy, why suffer?

Folks on the Colorado Front range came from "elsewhere"... they think this is "Like"... "Elsewhere"...

Denver is in a DESERT... the rain/precipitation here... is almost identical to what TUCSON Arizona gets... so... they plant trees, water grass... build golf courses... and Change the humidity of the area... until... yup...Evap coolers start working poorly... get over about 20% humidity and they do a poor job...

Air conditioners work well... but they cost... and since MOST people are riding the thin edge... the money just ain't there to buy the system... and then... pay to run it...

So... you sit in the shade and hold a cold beer to your Forehead! :)

Yup, the same thing has happened to some extent in Phoenix and Tuscon but add in the swimming pools. I'm a hot-house flower, I guess. My folks discovered when I was a child that getting the house below 80 - 85 helped keep my hide intact as well as my lungs healed up.

And I hear you about the money. The thermostat at our house has been run up to 80, vents shut off and doors to low traffic rooms shut and drapery is kept closed. And I've been thinking about cutting holes in the kitchen walls to set the freezer and refrigerator coils outside to dissipate the heat out of the house. Hubby is getting nervous!

By the way, I wanted to let you know Terry was one beautiful bride. I wish her and hubby the best.

Stay cool! Hah, just had a thought, you need to get Jillian a wading pool and set you lawn chair in it and 'supervise'. She has fun splashing Grandpa and you can stay cool.

Still keepin' us in suspense!! Are you conjerin on putting a hitch on that Raider to tow the 5ver with? Makes sense though, it would save a chunk of change on the diesel.

Hey, my vote goes for one of those "toy haulers", either a 5er or a bumper pull.
Be safe on your journey back to pick up the trailer and off into the wild blue yonder. I LOVE Montana.

was gonna haul it with the Raider, but have failed to find an adhesive that would hold... running the bolt through the shell rubbed a hole in my head...

Changing out a rig... What could he be thinkin'? ... Hmmm... MDT's and Toy Haulers?... Skoolie Conversions?.... Motorhomes?... lil' and super compact? How to improve function? I can likely maintain the suspense for a couple months at least :) Gonna take at least that long to get our ducks lined up... if not to just make the decision! :)