The Waters of Seeley Lake Don't Whisper to You Like Maybe The Blackfoot does...

But, the Clearwater River does feed it and it is still waters! Though... those waters aren't real still when there's speedboats pulling Water Skiers and rafts in amongst the Jet Skis zippin' around! 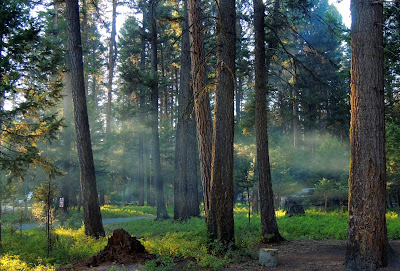 Ever' night seems like just at sunset it calms pretty good and the cooking fires sift their smokes through the trees... 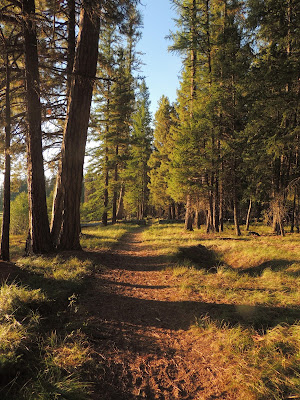 Up out of the north end of the campground there's a short trail where I can take Arlo and turn him loose for a while so he can get some of the run out of his system. 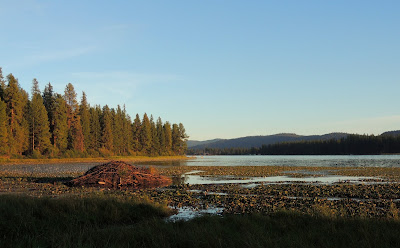 Up there a ways I found a Beaver Lodge I sure don't remember bein' here before, though I'm sure it was. You always think of Beavers building their outfits on creeks and streams don't you? 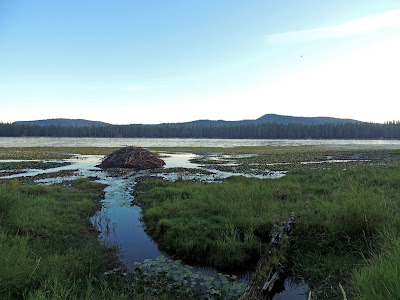 These'uns decided they wanted a waterfront property on a nice lake with a view! 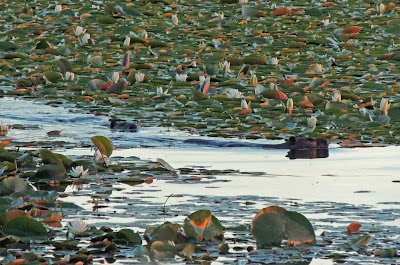 They came drifting home from a sunset swim through the Lily pads as Arlo and me wandered by. A lodge that big I'm sure there's more'n just this couple... but they've got a nice place. They turned out of the sea of lily pads across a small bit of open water and disappeared into their underwater front door. 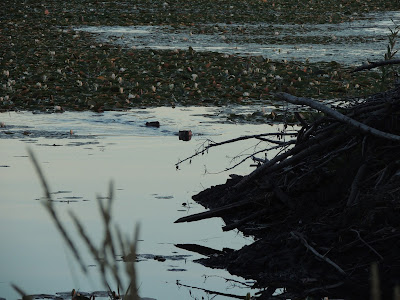 About that time I accidentally got kind of a cool shot. Three girls were being whistled around on a raft by a good sized speed boat. The sunset light caught the wake the raft kicked up and made it look like they were rafting through Lava.

Yep... even the water in Montana can catch fire! Ha ha. 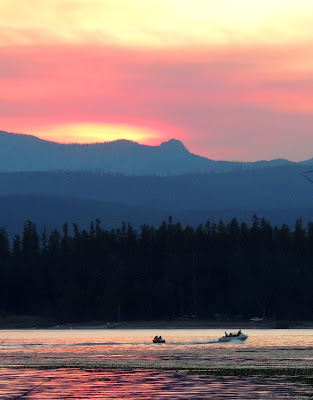 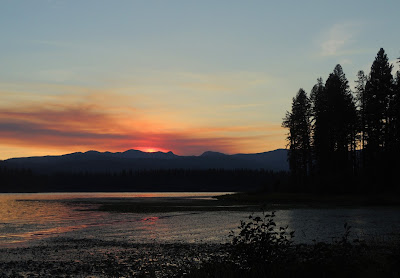 These pics were taken at the end of a pretty long day. Had to drive three hours to pick up a fresh new lil' generator I stumbled across to replace the Onan that died for certain and sure several days ago. For $150 plus the diesel to go get it I'll take that Lil' champion over the thousand dollar Hondas. It's not as quiet for sure... but it was still "new in the box" and since there's also no thousand bucks for the other I'll be happy to have this'un...

Without it, it would get REAL quiet around here!... and kinda dark! :)

Still have an electrical gremlin of some sort but I've got a fresh lil' Champion 1200 now to keep the batteries as powered as they'll stay...

As long as Montana keeps Charlie Russell's sunsets working... so will I.

Mike's parents lived at Seeley Lake before his mom dies, I always liked it up there.

Too bad those sunsets are forest fire smoke...otherwise is a beautiful place.