So they can take it to Missouri for construction Housing...

It's been kind of a nightmare little job... one of those deals where every problem you come across and fix... you expose two more.

Nearing the finish line though.

And for cost, just a little more than the price of ONLY a factory shower pan.

That includes the reframing and decking to give the proper support for the shower pan that Jayco didnt... 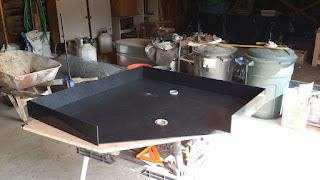 Built a shower pan from sheet ABS and put 4" sides on it... the pic shows it lacking the front side... which was missing...

The plastics guy couldn't count to five... so we had him bring his kid to work with him one day so I could get all my parts.

Putting the galvanized in was easy... right up until the last small piece... and discovered a 3/4 inch bulge in the lower half of the wall... in that back corner. 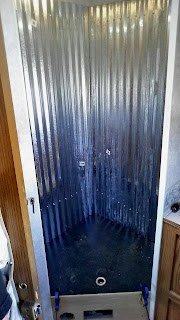 Took a few licks with an angle grinder and a few threats to convince it that it wanted to live there.

But it's almost done. Some trim, resetting the faucet and a little caulking and I'll call it finished.

I should have redone this shower a long time ago... for ME!

It'll actually be bigger now then the one they've been using in their house for the last several years! ;)

Just about as soon as I get this RV Redo done I've got to haul the rig to Missouri for them... then I don't know... if things aren't moving pretty quick on their house build... I'm likely to roll on back to Arizona and brave the summer to get a head start on my winter camp setup...

Too many chores and not enough brain pan for it all!

Nice job! Galvanized sheet metal was an interesting choice. BTW, even high dollar motorhomes leave a bit to be desired in the shower floor support department.

It seems that many things in RV design and construction make sense, a few are near genius, and far too many things leave you questioning the intelligence and heritage of the designer and builder.