On Broken Gears I Wander Along to Escape the Coming Snows...

With another storm brewing that threatened our camp under the Mogollon, herself leaving for Colorado Wednesday, and repairs on the truck still up in the air... I loaded the Raider early Sunday to be ready to haul out Monday. The idea being, that if the transmission failed to get worse... I'd be 60 miles closer to get the repairs done and down out of the predicted snow level for the coming storm.

A reader led me to some information about the Transmission in our old Dodge.(that had me believing it was a decent gamble) Being a 1999 it's got what's called an NV4500 five speed. It's a real good transmission with one fault... apparently. I've put seventy thousand miles on this tranny of it's 195,000 and something over a hundred thousand on a '98 with the same tranny before that and hadn't run across this particular issue.

Fifth gear some times goes away. One second you've got a five speed... and the next it's a four speed!  The deal is, when things wear to a point... there's some sort of a retention nut that holds the gear in place on the shaft... and the nut loosens up and lets the gear slide out of place... and you no longer have five speeds.

4th gear don't work so good on the highway. Counting the 5er, it pretty much converts the rig into a 19,000+- pound rolling road block. Now if it was a Prius... a fella might have a problem... but with something well over 8000 pounds of truck and more than 11,000 of trailer... and a fella with a less than stellar attitude sunk down in the drivers chair... makes it a lil' tough to bully or run over. :)

So... I got the scooter on the truck ready to go... in plenty of time to gather in the last sunset up there. 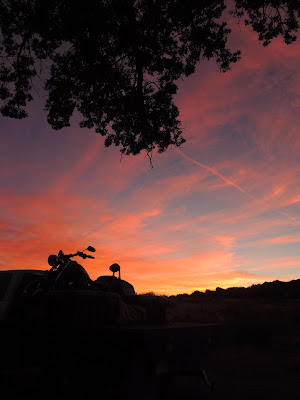 ... and come mornin'... We finished loading after a ten day + stay here, and limped back on down to the valley with the flashers flashin'... and our big Ol' selfs roadblockin' along at 48 mph. Settled into a camp I've used before east of Wickenburg a ways. There's space, good sun, beer in Wickenburg just 15 miles or so... and It lets me be close enough for to make the repair situation a lil' more convenient...

.. while keepin' me out of town as much as possible in the process!


After some time tracking down shop referrals and installers, I found the guy in town that's rebuilding the NV4500 Transmission the right way. He does his rebuilds with redesigned parts that have eliminated the gear issue in question. Then, since all that will be torn down anyway, it kinda made no sense to be into that deep into it with labor and not just go ahead and replace the clutch.

What with that damned Murphy doggin' my heels... It only seemed reasonable, since there's enough of the beet money still in the bank to cover it to go ahead and swap out those parts now too.

I'm guessing that could let go any time... so now is the right time to just suck it up and do that too.

Some might say why don't you save the coin and just stick a used transmission in there? ... and I thought of that too. My own searches found trannys from 900 up, with most being north of a thousand. A friend in California found one quick for $675. The 900 and up ones are kinda nuts... the total rebuild is $950! Even my bald head can do the math on this one.

There'd still be freight on those used outfits, and the swapping labor costs of a few hundred bucks (my ambition for THAT sort of labor is weak)... and with no warranty and the same transmission "issue" lurking... I could have the thing let go 12 miles down the road... So... this is I decided, one of those penny wise and pound foolish sorts of deals.

Anyhoo... I'm on the schedule to get the truck to 'em Wednesday morning some time. I'll run on down there and offload the Raider to get home on and let 'em have at it. They claim with a lil' luck and the sky don't fall they could be done by Friday...

In the mean time... We got several pieces displayed in the Gypsies in the Wind Gallery over the past weekend. I've also been working on another leather project, a photo album, as I continue to retool my tooling skills and work to bring things back up to speed.

I'm hoping to be sufficiently satisfied with the rekindling of my work by late winter that I can add a couple of more galleries to the Main Store... A Journal Gallery and one for Albums... as well as adding some designs to the Buckle gallery that's already up.

Till then... As soon as the truck gets dropped off I'll ride the bike back here to the desert, get the coffee pot fired up... and immerse myself in the task of continuing to spin the story of the next Novel in the Jensen series that's in the works.

So... though we took it in the shorts... one more time... there's work waiting. Time to Cowboy Up and get after it.

Well it will be new and better. Absent 'normal maintenance' hope you are good for a long while, you're due for a nice break for sure.

Hang in there and have a great Christmas.

What in the world is this statement, "Plumb out of words... "???
That ain't never happened and it ain't ever gonna happen!

In the near quarter century we've known each other, (you are gettin' old), you've been out of your mind, out of luck, out of money, out of patience, out of energy, but never out of words and I don't believe you ever will be!

brian ,, have had to rebuild my tranny twice now ..95 dodge diesel 2hundred thousand kilometers. first torque convertor ,second ,run it out of oil ..mjy fault ,but about 10,000 dollars total ..but what a truck ..hang tough cowboy ..ttyl.