Why Keep Pushing Into the Wind?

What else are you gonna do?

There's been days of stretching out the near empty fuel tank, wondering if we were gonna find a camp for the night, watching the cash go out the door a lot faster than the end of the month approached. We've camped in the middle of the road... broken, and we've lain in camp losing weight because we were both too sick to travel into town for groceries.

... and I'm sure I've forgotten a few other potholes we've bounced through along the way. Life ain't easy for anyone, no matter what road you follow...

So we're rolling down the road yesterday behind that, oh! The WINDSHIELD that got cracked by that texting bimbo in Utah! and the cummins up front stumbles... and stumbles again... ooooffffff...

Yeah, we'd decided that playing the endless musical campsite game at Fort Stevens had worn out its welcome so we figured to just go ahead and start our roll east. We took one last lil' stroll around the lake that sides the campground and then headed out... 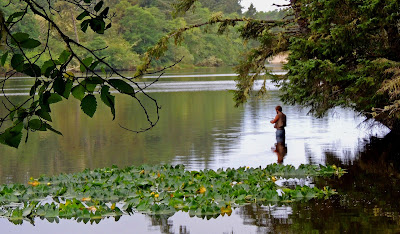 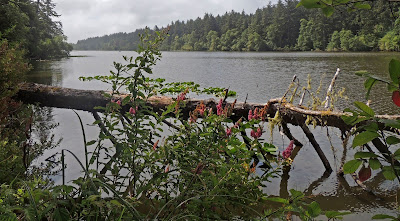 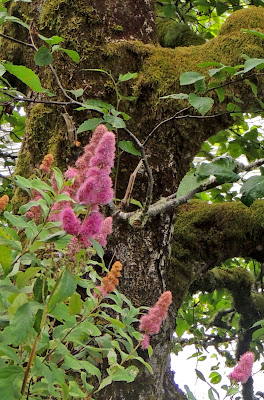 We'd not yet cleared the Astoria City limits before the fun began.

So now, the repair bill grows and seems endless. Frustration invades and thoughts of wouldn't it be nice to have a "new" truck with fewer miles and some extra shiny bells and whistles, and maybe a fresher fiver? It can even get to the point of running numbers on mortgage calculators... "I can probably swing that. I won't have to stretch the truth THAT far to the banker to talk him into an RV home loan."

Then, while waiting through a Saturday evening in a friendly neighborhood Walmart... waiting for Monday to dawn so another mechanic can apply his magic bandage on this aging old Dodge of ours, I read Ara's essay on "You Can't Fix Stupid."

Thank you Ara! for the kick in the kiester that restores the focus on what I have... and what I lack.

Yeah, the truck is old and worn. It's a toss up which will fall over dead first, the truck or the fifth wheel. Yes our income continues to imitate the flight of a wounded goonie bird trying to land; wobbling, unstable and always sinking...

... at the same time our inglorious leaders save us by doubling the burden of their cancerous and incompetent government in new and ingenious ways.

I could be standing in a hardware store selling garden hose to some genius who intends to repair his propane line with it because it's $4.00 cheaper than the PROPANE line. Or 1000 lb test chain to the guy who intends to hang it on his brand new to him, $45,000 37 foot, 20,000 lb fifth wheel for safety chains... that he's pulling behind his brand new $50,000 dollar diesel pickup, because he "Don't want it hanging onto my Truck if it comes Loose! That's Crazy! and I'm not paying $35 dollars for those safety chains!"

I could be sitting in that line of traffic I recently endured in Portland, sucking up the fumes of that lovely green Prius in front of me, or the BMW beside it... commuting three hours a day to and from that hardware store... so I can finance the repetition of the circle.

I could be diagnosed with a non-operable cancer on my liver or be crippled up with arthritis.

And here I am, a wanderer with his  Home on the Highway, free and clear, worn as it is... Wandering pretty much wherever he chooses...

Still, the melancholy of KNOWING how much finer this world could be but being totally impotent to coax others to know that revelation... is hard to accept. If people could only extract their heads from Federally coerced rectal defilade long enough to realize... There IS a better way! ~ and that it's NOT in pursuing the same weary propagandized circle...  If a worn old cowboy can see the light, so can an accountant, an office manager, a cop, a mechanic and an engineer.

When the numbers and ideas you're being Fed don't add up, you have no option but to question the fella insisting that they do. "Trust Me" don't cut it any more.

There IS a better way. What it is for you, I haven't a clue. The only thing I know, for sure and for certain is; If you give up and lay down, you'll never find it.

For me, that is the reason to Keep on Running into the Wind... each day that I find my way, I am LIVING my better way.

Two weeks full time in our Casita, this post was so refreshing. I have to remember the plus and minus of all things...I'm still feeling the plus. Moving days are tiresome...but I sure enjoy my days non-traveling!

"If people could only extract their heads from Federally coerced..." Yeah, if only. Not going to happen so may as well live the life we have as best we can. Keep on truckin'.