The Song Has New Meaning ~ "Another Day Older and Deeper in Debt..."

That's how the old coal miners did it according to the song.  I'm startin' to feel like a modern gypsy version. Since Peter had nothin' left to rob this time, we just hung the thing on Hope and got ready to head on down the road.

The system that's supposed to diagnose things and tell ya what to fix didn't do its job. That left 'em  having to do it the old fashioned way, figure it out. The way I understand it was they go in and look for parts that are reading too low a voltage. That took us to the TPS (throttle position sensor) ... which from the way the thing was acting, was what we all suspected in the first place.

Now... if you're an ingenious mechanic who can diagnose those things the code readers fail to find, you can save a bundle buying your parts at Autozone and doin' the labor yourself. and that's where I get left out in the cold. I could look under there all day and still not have any idea what I was looking at. Too many wires, too much plumbing and too much computerized whizbang ee-lek-trawnic wizardry.

Nope, this is one place they got me. Grab him by the tender parts and Ska-WHEEZE! is the technique they use.

So, got the truck back so late today that it made no sense to try and move, so we spend our fourth nite, courtesy of Walmart. But she's hitched up now and we'll be hauling out early tomorrow morning.

Now, ya know? On occasion,  I'm a lil' self conscious 'bout this worn old rig. The delaminating fiberglass here and there, the cracks and dings... The bits and pieces strapped on and bolted on here and there to make a rig that works. She's worn but still serviceable. 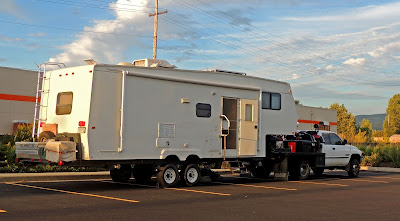 But then, all I have to do is wait of the occasional neighbor to completely rearrange my opinion of the old rig... 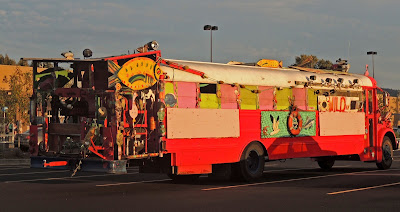 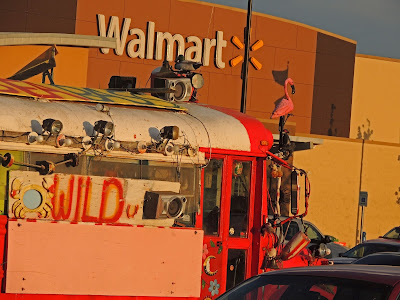 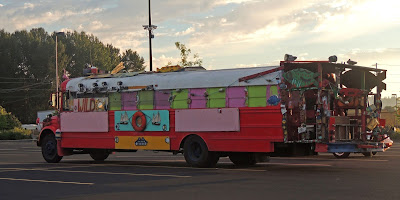 What can I say? At some point ya just have to celebrate the Free Spirits that some folks are blessed with... and the easy way they have of riding through this vale of tears... I guess...

The tentative direction we'll be moving, come the dawn, has changed a bit. Rather than running east up the Columbia I've chosen to make a short run north, before cutting east at Hwy 12 and making for a night camp somewhere along the southern or eastern shoulders of Mt. Rainier.

The next few days will be spent slowly making our crossing of eastern Washington; moving across Idaho and on to the country somewhere around Missoula Montana.

With most of two months before we have to be in Sydney, there's no great rush. Only to get back to the mountains after our long slow visit from the California Desert to the Oregon Coast.

Hitched up and Ready to Roll
Brian
Posted by Brian at 10:57 PM

I want that bus! That is what I'm looking for when I mange to break free.

Brian....you mentioned Sydney....I'm assuming Sydney, MT.....are ya'll going to work the sugar beet harvest there? If so, that is exactly where we will be too.

I'm still in Northeastern Washington.... going to be heading out to Northern Idaho then on to Montana within the next 10 days. Maybe our paths will pass. If not, we can definitely learn good spots.

Brain, I know that Murphy might be with you again. How about a shake down cruise while you are still near the repair shop to see if the problem it really gone? I too hope it is but.......

Shadow; Ha Ha! You are Just the kind of free spirit to fit a rig like that! ;)

Klbexplores; We've bent our course to try and dust up around the fires farther south. Kinda smoky... Tentative plan is shooting for Lake Pend Orielle area first... in the next week or so...

acheapguy; Thought about that, but, truth be known, it was a couple weeks from the first incidence to the rash that pushed me into the shop... I hear you for sure... buuuuut, I'm planning on this latest being fixed and just runnin' with it. ;)

Why your rig looks positively boring next to that bus. Maybe you need to buy some paint and decals before you leave Walmart!!