The Sun Has Gone AWOL ~ But ~ The Beer is Close!

Sunny California, at least the part we're occupying is enduring a few days of not so sunny. I expect it's a legislated thing. They got to keep the balance. You know; Equal Opportunity weather.

Hell, we even had an 18" snow to keep us sympathetic to those folks back yonder complaining 'bout the lack of a spring. Really! We did!... one lil' frozen half snow/half hail pellet every 18". It was plum awful. What with the cool dropping into the twenties overnight and only climbing up into the fifties during the daylight hours, the furnace has been getting exercised to boot.

Yup... this RV boondocking is a real stressful thing.

We've bumped up to a camp called Glass Creek Camp ground; a semi-hidden spot part way between Mammoth Lakes and Lee Vining. It's semi because everybody whose been around here at all knows about it but it's got no signs for the un-initiated. One of the few remaining "Free" U.S. Forest Service camp grounds so shhhhhh... don't tell no body!

I think maybe they named it Glass Creek because you can't hardly take a step without trodding on a chunk of obsidian... Too bad the stuff isn't more valuable... I could tally up a fortune in an afternoon just strollin' up the trail.

The usual directions to get here are pretty accurate though; Go north on U.S. 395 past the Mammoth lakes scenic loop intersection and then turn left at the state highway dept. shop that comes up on your right.

Tucked back in the trees is a spacious and for now, mostly empty spot amongst the pines. 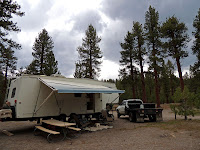 No corporation has picked it up likely because it doesn't have a water supply and the outhouses were built for people before "super-sizing" became fashionable.

Truth be known... I see quite a few people these days who coulddn't use the "facilities" here... no matter how desperate their need.

When a runt like me is purt near rubbing his shoulders on the walls... you know the designer was a lil' feller. ;)

While there's no water right here in camp, just a mile or so up the road is a state rest area with dumpsters and a water spigot... There's a sign; "No Household Garbage"... hmmm... I wonder... is "Camphold" the same thing? ;) I guess it's time to get back to our camp fire consuming that what it can... and Mammoth is just a few miles over the mountain... so a good, if costly Beer supply is close as well!

This could be a good camp when the sun returns! ;) 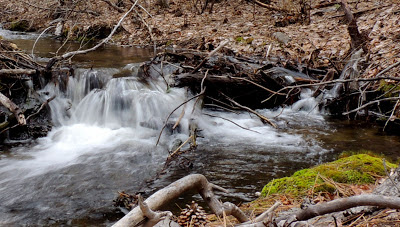 Our camp is backed by a lil stream that though small harbors edible sized trout. One of our few neighbors here pulled two meals out of the lil' flow less than a hundred feet from where we now sit.

I don't know if it's my lazy or my cipherin' talents... I just can't get excited 'bout huntin' and fishin' any more.

Let's see. Go fishing to catch my own supper and save money from not getting squeezed at the Safeway? fishing rod $50. Reel $75. Spinner $5.95... non-resident fishing license $48 for a few days... uh huh... that's real cheap groceries! ;) kinda like the guys who "Hunt" to feed their families.

When we get tired of living free in this camp... just two miles up the road and a mite under two miles back into the National Forest on the other side is a prime full on RV Boondocking site we may use after this camp ... unless the urge to scratch my itch with some miles on asphalt strikes first and pushes me on a ways under the advancing spring.

This season we're moving north a lot slower it seems. Our camps are each ten days to two weeks... with real short moves in between. This last move was all of twenty miles or so. The one before that, maybe fifty?

The consequence is our fuel bill is sucking cash some slower than in past years. Combined with our camps being FREE to $2.50 a night, we're subsisting 'bout as cheap as a body can.

Considering that our income is thinner at the same time that's a good thing! ;) So, one more time, we aren't gaining ground in the financial world but we continue to keep on goin' broke at a sustainable pace.

The cloudy skies tend to reduce my sight seein' urges so I should get a lot of work done on the coming mystery and maybe even a mite more web work. There are hidden benefits to foul weather.

*ed. note* I removed a comment somebody hung on here promoting their blog. Now, I don't care if you comment with a link to your blog, if you're contributing something. Hell I promote that and encourage it. But... when all you can do is spew prejudice and hate supported by distorted, fabricated, twisted and mis-directed statistics while claiming that your "stuff" don't stink... Well, You can take that small minded, bigoted, pea wit, rubbish of judging individuals by the group and spew your poison somewhere else. I won't tolerate that tarring everyone with the same brush crap here. 'Nuff said.

I keep following along best I can on Google maps finding my direction....Owens Road was a trip! Hwy 395 this Fall....my hopeful destination. P.S. That warming shed was the coolest ever!

Sounds like a great camp. We have been dealing with the sunless days often times the same ways. sometimes it is good to just cool the jets a bit.

cozybegone; Hwy 395 in the fall is supposed to have a high shine! We'd do that way to... except we'll be spending a lot of the fall working in North Dakota!

Turnwhentheroadoes; The sunless days create the contrast for the Blued sky ones! Only trouble with me cooling my jets is... it gives me the time to think myself into more trouble! ;)