With both of us feeling kind of lazy, I unloaded Sonja before we climbed in the Ol' Dodge yesterday to scout around a bit.


You know... you'll hear some folks say they tire of the road. I'm one who just can't gather that idea in. Oh I might get weary in a particular day, but wake up the next morning, knowing that there's more sights unseen like this'un... and I'm ready to roll.

The hunger for chasing the horizon weakens occasionally... I start toying with the idea of some sort of a longer, base camp sort of place... but... after a lil' while of quiet cogitation with a cup of coffee, staring off at the horizon with Bob Seeger or John Denver in the background...

Listening to the wind in the trees in a camp I've never slept in before... seeing the road disappearing in front of me, lost over the blue horizon... The lightness of spirit I feel on the road, whether I'm in the rig or straddling my Yamaha... is something I can't endure the thought of letting go.

... and to tell the truth, we didn't actually stop this time either! ;) outside of a few minutes at the visitor center on the edge of town to collect some maps and a lil' intel on the area, we rolled right through.

We thought it'd be better to save that for today. We'll be goin' back this afternoon to have Heidi's 29th birthday meal...


Since a lot of this country was an area that Ansel Adams prowled around in, I thought I'd try one of those black and white photos he was partial to... hmmm... I'm goin' to have to study them up a bit more. I did a lil' of it near 40 years ago... and then just got distracted by the color that grabs ever'body else.

Just a simple snapshot, but at least to me, there is something different about the feel of a photograph without all the color... I took the same shot in color, and this one above had a stronger pull... Somehow it seems like there's a spirit in the scene that gets covered over by the distraction of colors... Maybe the man was right! ;) 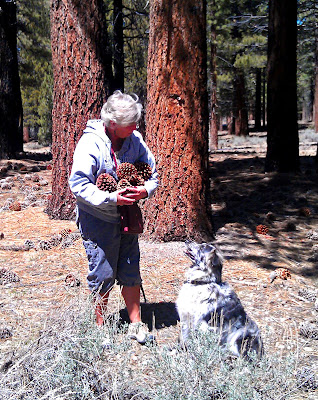 Herself just couldn't help herself from gathering up an armful of the humongous pine cones strewn about under the trees... claims I'm gonna have to abandon the only closet that's left to me now... so she has a place to store up a supply.

We found a fine if austere FREE Forest Service camp up at Glass creek a bit north of Mammoth lakes... a likely spot if we bump up just twenty miles or so in a week or two... and several areas that promise some sweet boondock camps... this eastern sierra's country is just littered with fine places to be.

Here in our new camp at Crowley Lake there's a low bush scattered all around... 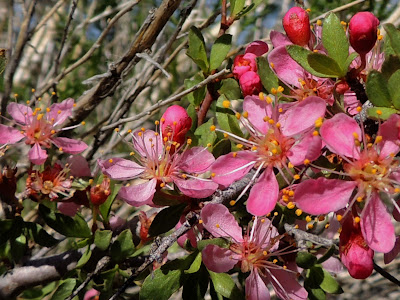 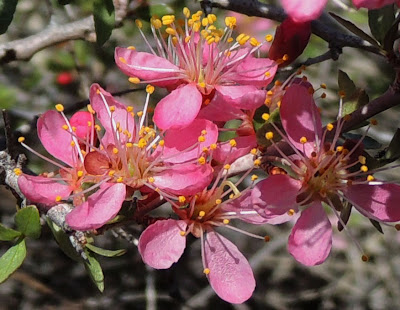 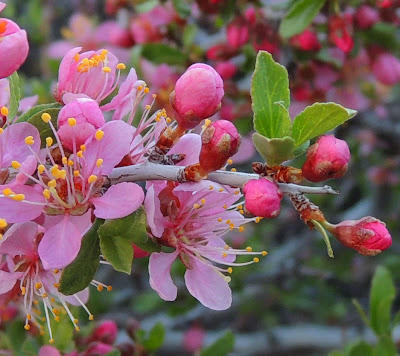 Don't know what it is, but the branches are festooned with the buds and flowers.

The wildflower's this spring so far, at least down in the desert have been pretty weak. They had a real dry winter. Even a lot of the winter closed roads are opening earlier than normal.

We're hoping that Tioga Pass will open and let us into the east entrance of Yosemite before my restless urges push us out of reach.

Watching a faint storm across the valley I burned our burgers for supper. The breeze coming across Lake Crowley was pretty cool so I set up our Grill Guard for this camp.

It's a pricey bit of camp furniture, but it's amazing how well the dang thing works!


Ever try to cook your supper in a stiff wind? and the breeze racing through your camp stole the heat out of the grill before it could cook your steaks?

This lil' Weber Grill of our is the very best we've had... but even it had trouble a time or two from the breeze. I put it in this aluminum guard and you have to keep a close eye on it 'cause if you walk away and come back in the usual amount of time, your supper will be well done!


I don't "endorse" too many things, and nothing I've not used or looked at pretty closely myself. But this lil' gizmo... pricey as it is! is a camp cooking gizmo that actually performs as advertised.

Just to say it, I've got no connection or affiliate association with the outfit... I'm just passin' on something that's worked well for me!

So... if you need something for your grill or coleman stove... either pay the price for this fella's design... or go through the hassle of fabricating one for yourself. The things work!

The day's a wastin' so I'd better get out and go to collecting some of it!

In pursuit of the Art of Ansel Adams!
Brian

Beautiful sites on your endless road!

I love my Weber, too, Brian. I like the wind shield you have.

Once I found one pine tree amongst thousands that was dropping unusually large pine cones. Like herself, I just couldn't help myself. I have them to this day-I'm sure Rich was wondering exactly the same thing you wondered. I went all the way back to the RV to get some large green garbage bags so I could gather them up so that I'd have enough to bring each of my kids home a bunch. The looks I got from each of them made it very clear that theirs were going to be back outside, again!