Long Views Can Illuminate the Chores That Need to Be Done...

Back in Colorado... where we hailed from... they're getting pummeled by a late winter storm.

I can't say I miss it. Chopping ice and pushin' critters to places they don't want to go in ten degree weather ~ or less ~ or riding my two wheeled sled to a hardware store, through the same, to squeeze another days subsistence out of a soul draining system... don't toot my whistle at all!

We've been riding out a lil' bit of weather here. The wind came up the other night and the clouds lowered over the Sierras to our West and whatever Mountains those are that fringe the west side of Death Valley to our East...

Two days of rig rattling wind makes a guy grateful that he's not yet minimized his possessions to either a tiny trailer or canvas. ;)

But, getting up in the morning after the "Storm" isn't that awful difficult in any of those scenarios...

... When this is the view that greets your eyes when you roll out and drop the blind...

Laid up lazy in bed until after sunrise and the snow had already receded from its full advance. At one time it had nearly reached the base of the slopes... but that dusting was already gone by the time the sun came up strong...

Even the dry mountains over east, that cradle Death Valley and Panamint Springs got a dusting. 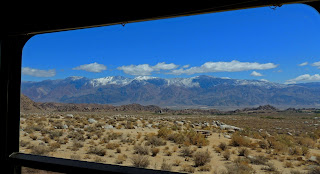 A fella has little to complain of when his Home sits between these two views, with all the space in between, and all he's got to do is turn around in it!

His only trouble is being pushed inside by a cold wind for a couple of days... at a time when his wandering urges haven't fully wrestled loose from the confines of winter...

Our camp here is rapidly becoming a hurry-up-and-wait scenario. Waiting for the country north of here to warm up enough to permit an itchy drifter to start moving that way.

In spite of the wait imposed on the scattered brain of that itchy drifter, things are still moving around here... if slowly.

Thrown in to complicate things is the fool bureaucracy of Colorado. The plates on the truck expire THIS month... as well as the plate on the Raider.

That's only a problem for us because Colorado still has parts of the state which require the emissions inspection for "Some" vehicles... (I've found the emissions inspection system to be nothing but an environmentally phony "profit center" on several occasions both in Colorado and Arizona. But it is how it is and politicos have their fingers inextricably in the till so I won't get in to that)

... It becomes a problem for us because our "Address", where we DON'T live... is inside one of those lines...

Then, the state has recently enacted a few laws that any person who can read and understand rudimentary American english can see... Those new "laws" are blatant, bald faced violations of the founding laws of the country that were SUPPOSED to regulate all subsequent laws... But then, ignoring inconvenient "Law" is how our "Rulers" do their jobs isn't it? ... and we all just let it happen... arrrrrggggghhhhh....

So... in trying to work around the manure within their system I got frustrated... I got Mad... and I got... well... that's gonna have to wait to tell until its complete... Let's just say to Colorado Bureaucracy; "You lose."

The only thing a fella can do is what he can to deprive the parasite of its host. ;)

Looking out at the long views at the end of day... and taking its portrait through the window... one of us said; "We really need to clean the windows!" :)

So... with that unspoken "progress" ... in progress... One mountain shadowed the other... and closed out another day on the road.

Still, distilling out the baloney and the useless...
Brian

I'm moving to Phoenix, be there next Saturday. If I didn't need to have an address, since I will be working an actual job, I would move my address to Nevada outside of Las Vegas enough to not need vehicle emission tests. I don't think I can get by with that while working a steady job on Phoenix, though. Maybe next time you two are close enough we can finally share that camp fire and beverages. I'm also in the market for an RV now as my primary home. I'm waiting till I get to AZ to check out the situation.