What Does a The Tomb Raider, Dumb and Dumber, and The Cost of RV Boondocking All Have in Common?

So... yesterday, knowin' a blow was comin'... we went in to town, did our laundry, did some grocery stockin' for a couple days of bad weather. I was already knowin', from past marks left in the dirt that this place was Arizona gumbo when it gets wet.

That means if you're a wheeled veehickle... ya'll ain't goin' NoWhere... 'thout tearin' things up.

So... With that in mind we go to town... and what does my forgetful mind leave behind? The empty fuel can for the generator. As good as our Solar system works... it can't make much juice on cloudy, stormin' days. We'd be needful of running Ol' Squeal N' Belch to keep the batteries hummin' during two days of bad weather.

Leavin' the gas can behind = DUMB. and all probably 'cause I'm gettin' so squeaky cheap that my procrastinatin' sub-conscious was likely payin' attention and tripped my memory that was tryin' to take the can along, in a self-flagillatin' effort to cut my paradoxical spendthrift ways!

... and that = involving the Cost of RV Boondocking! Which is pretty comical on the face of it since the rent right where we're living today is ZERO! ;)

The whole deal got stirred up 'cause this was what was on the way... 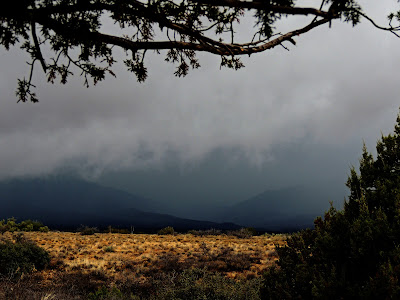 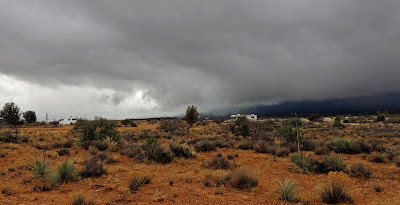 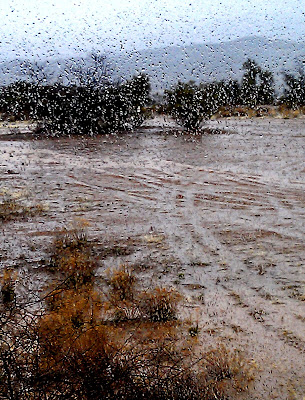 Now, down here they got this clay that when it's the right consistency, drivin' on it is kinda like an epileptic tryin' to roller skate on greased marbles.

But... since we WERE in town anyway... and it had got down to past three in the O'clock... we ran by the Town Cemetery to pilfer a few six gallon jugs of water! ;) and that = Tomb Raider! :))

I have no recollection of ever sneakin' our water out of a cemetery ever before! :)

Well... the storm blew in right on schedule and of course the batteries; with the heater runnin' and the computer burnin' up eel-ek-trawns with all my button tappin, I found it necessary to take the truck to town for some genset gas... 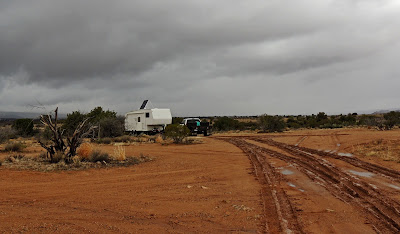 If ya'll been 'round here for any time at all you know how I feel 'bout bozos tearin' things up with their 4 by's! and there I go... boxin' myself into a corner where I have to lock'er in 4by to get out... and I'm out there in that ol' dodge... uh huh... cuttin' some pretty good tracks through the muck just barely finding enough traction to move... when I SHOULD be sittin' inside warm and dry and NOT makin' ruts!

I'll have some shovelin' to do as soon as things dry off enough to move the dirt and before it sets up like concrete and repair the damage I done... an THAT = DUMBER!

The only thing that matched my mental lapse is a guy near by drivin' a big rig outfit... he's got a big class eight tractor pullin' a GI-Normous fiver...

He tried to move THAT tractor around to hook up in this slip N' slide stuff. The front end mired in when he pulled around to back in... He was out tryin' to dig the front out when I left. I figured to see him still strugglin' when I got back.

I was surprised when I turned off the pavement and came up the lil' two track to see the tractor had in deed got in under the trailer... 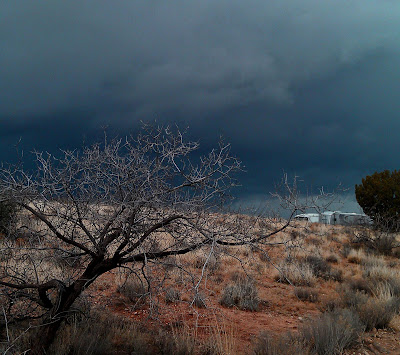 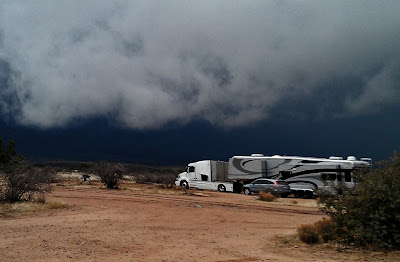 He actually managed to get the parts of his rig together without tearin' things up worse than I did. I'm guessin' he must have some of the same feelings 'bout things I do... cuz if ya'll look close at the photo above... he's over there on the left... trying to fill in the ruts with a board where he'd mired the front axle. This would be DUMB #2 :)

At this point whoever his friends with the lil' car were loaded 'em up and hauled 'em away for a while. That's a good thing. If he'd tried to haul that monster out of there in this weather he'd be stuck deep... somewhere between where he's parked now... and that lil' bush on the far left! :))

So... properly self chastised for senile foolishness and careless dispopulation of my fuel can... We broke out the schnaps... heated up some of that Cemetery water! mixed 'em all up with a special, magical brown powder... and warmed up the cold afternoon! 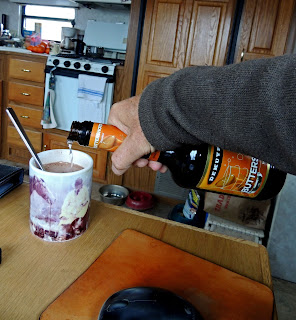 Something in the process must have tickled my writing parts. On top of a couple of blog posts I banged out in the morning I assembled a couple of thousand words on the next Ben Jensen Novel... and then had this post done prior to 9pm last night!

Juuuuuust 'bout Done for the day!
Brian
Posted by Brian at 9:04 PM

Don't ya believe in list making? (then make a sticky note by the front door...DON'T FORGET LIST)
We have found if you write things down ya wanna do or get, it usually cements it in your brain with it in your pocket. Old age is like that...it saps your short term memory. Then you gotta depend on the ones you remember and write them down...join the club, Hoss!!! :)

Be careful getting water from the cemetery. I did once up in Williams. Ended up with a tank half full of red cinders and who knows what body parts and other unwanted stuff.