Me and the Raider went for a short ride yesterday morning. It was good to be out in the sun on the open road climbing up into the mountains... Though I didn't go all the way up. There's still snow atop Mingus Mtn! ;)

That's a fun ride. Just a few miles up hwy 260 through Cottonwood from our camp east of town and then turn off on 89A for the climb up into the Black Hills of North Central Arizona to the town of Jerome. 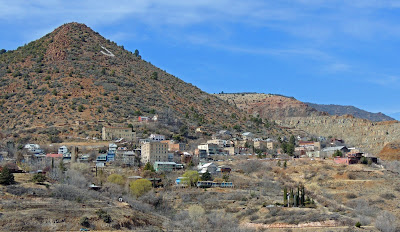 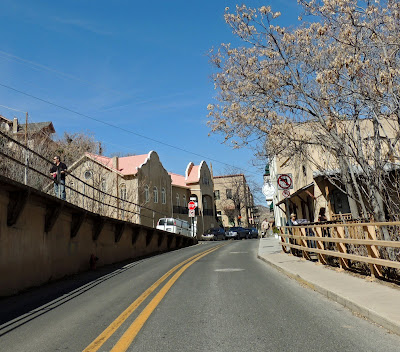 What can I say 'bout Jerome, Arizona that's not been repeated a thousand times already? Jerome is one of those interesting spots that isn't especially photogenic. It's the remains of an old time copper mining town that was reborn from a ghost town into an artists colony.

The place is perched on the dry slopes of the Black Hills west of Cottonwood straddling Arizona 89A. Just a worn old place fighting to preserve it's personality. 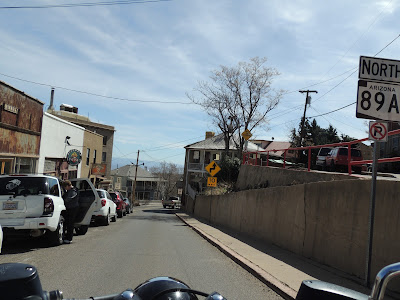 Miners, gamblers, a soiled dove or two all called this place home for a while. Another of the towns too tough to die. This one nearly did... Now it's found new life as a tourist magnet.

They make their money three ways... first, selling their mainly artist type wares to the public... Second, feeding you in a small selection of cafe's and such in between your shopping circles.

Then, mixed in with all that touristing, the town's black and white lays hidden amongst the parked cars, waiting to catch you bending the rules so it can mine some more revenue from your pockets! ;)

Take your time. The streets are snug, drives and roads coming in from odd angles... and you never know when one of them snowbirds is gonna throw a door open in their haste to get that trinket before some other tourista beats 'em to it!

This morning I just played biker and rolled through the town  and on up to near the top of Mingus Mtn.

Twists and turns and light traffic on a sunny day make for a good ride. 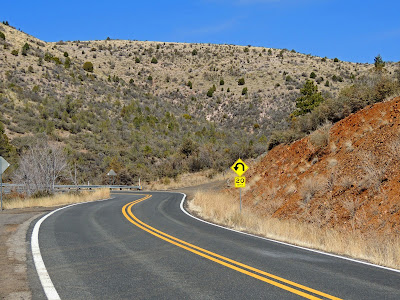 I got back to camp in time to take a quick lunch then we loaded in the truck to roll it over to the Montezuma Castle and Montezuma Well country.

The ruins in this area were built by who the fellas that have studied such doins call the Sinagua People.

***A lil' sidebar here; In the visitor center at Montezuma Castle there was a LONG list of the research projects going on in the area.

I'm not one for inhibiting the pursuit of knowledge. That's a risky position to take up... but... considering the general situation of soh-sigh-uh-tee... would it be possible that studying the sexual responsibilities and parenting abilities of leeches in Arizona is juuuuuuuuuust a small mis-allocation of  assets in short supply? ... Just sayin'... ;) ***

...hmmmmm... on second thought... might could be the results of such a study might could provide us with a bit of insight for dealing with the politicians we're afflicted with! ;) ZING!!!

This area, the Verde Valley, is one of my favorite parts of Arizona. There's a bundle of creeks and rivers. The Cottonwoods and Sycamores provide precious shade to lay up and sip a cool beer on a hot summer afternoon...

A lot of this country and that just over east, just under and above the Mogollon Rim is the country Zane Grey wrote about in a lot of his westerns.

The "Castle" was actually not the largest of the ruins along this river, only the best preserved. Just around the corner of the canyon are the remains of a much larger dwelling. 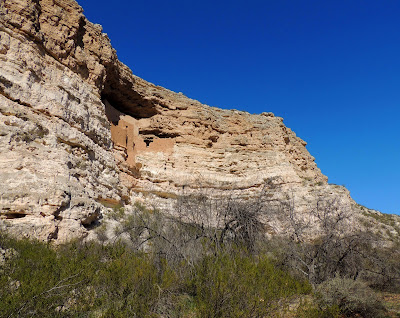 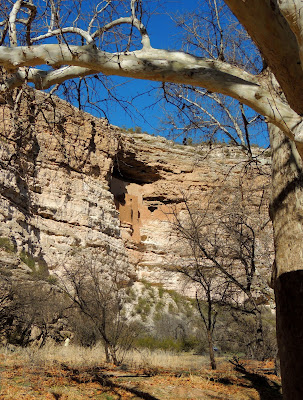 8 or 10 miles or so and a bit north is the place called Montezuma well. It's a sink created from some sort of collapse of what amounted to a big cave. The odd thing about this place is, no fish. The water is heavily laced with Sulfur Dioxide.

Too much for fish... but thousands of leeches call it home! Hence the "Study". ;) 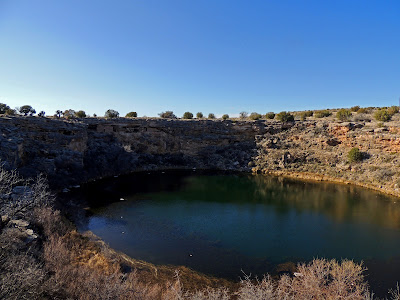 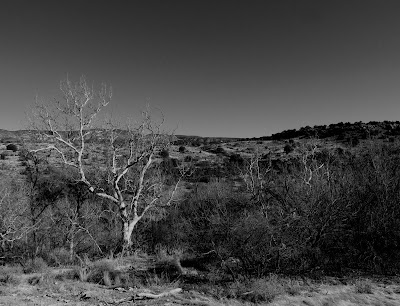 I'm looking at this hole and reading on one of the sign boards that a steady unending daily flow of 1.6 million gallons runs into this sink from vents on its floor.

The thought immediately occurred to this old desert rat; "That water level looks pretty stable... if that much is flowin' in... where the hell is it going. It looks like a bowl?" 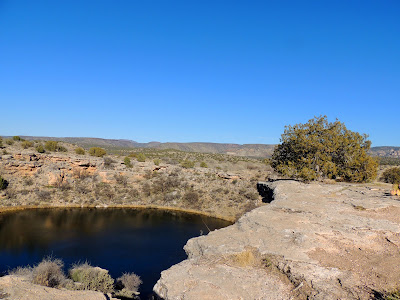 Well! ;) A lil' farther on was another sign that pointed the way to the outflow! You have to go down a set of rock steps through a notch in the rocks... 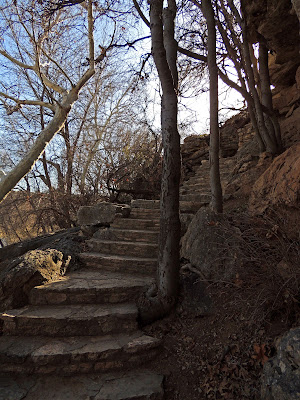 ... to a small channel of water flowin' along the base of the canyon wall... 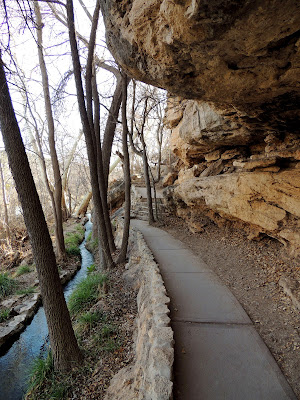 Follow along the narrow path for a few yards in the shade of the rocks and trees and the stream disappears around a corner of the wall... 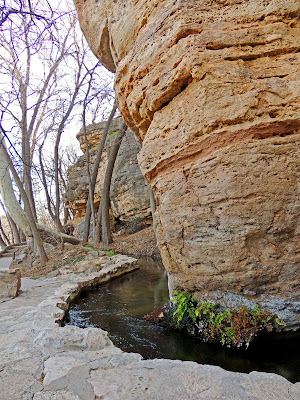 1.6 million gallons a day flows out, mainly through this lil' stream coming almost silently out of a hole in the wall... No cascading waterfall, but it's an awful pretty and peaceful spot. I can only imagine how sweet a retreat it would be on a hot summer afternoon... shaded up in this spot with the water gurgling...

... and Beaver Creek just a few steps away... on it's way to the Verde River... Some sweet Arizona Homeland country...


Arizona ain't nearly as dry as some would lead you to believe. There's not the water for all those lawns and golf courses down in the valley... but it's a fine place for a lot fewer people to live! ;)

Made a wide circle around by way of Oak Creek and Sedona pulling back into camp just before sunset... of which there was none. But, in the morning we woke to the sound a Dragon Breathing... 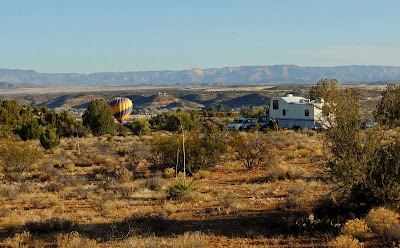 A Hot air balloon sank out of sight below the rim of the hill. A couple minutes later, with the roaring of a Dragons lungs it rose back into view... 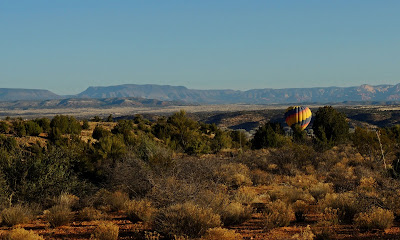 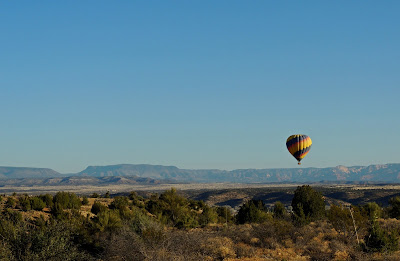 We'll need to run some chores today to be ready to hunker down again for a couple of days. Another western storm is slotted to blow through this weekend... with a promise of the possibility of more snow! grrrrrr... ;) ... this camp is on soft ground so we'll be pretty much held to camp till the ground firms back up... if the precipitation actually materializes...

On the Arizona High Desert
Brian

P.S. Dealing with the Spam; Changing the blog to "registered users" (your google account or Open I.D.) seems to have curtailed the spam assault. Hopefully signing into your account to leave a comment will be less hassle than having to sort out that "Word Verification" puzzle.
Posted by Brian at 10:08 AM

Oh Brian, I think I just melted away sitting at my desk, 8-5 work side, dreaming of our take off very very soon! I enlarged that picture of Jerome and had to run for my co-worker. "You have just got to see this...amazing or what?!!" Thanks for the tour....back to my daydreaming!

We enjoyed nosing around Jerome and thinking that ride just up above the city would be magnificent on a bike! (we were in our Tracker) Bet it was one of those "feel like I am in a movie" moments to cruise along on a big bike through those curves and turns!

Great pictures, especially the black and white shot.
But shouldn't a study on the life habits of Leeches be done in DC?

Nice pictures and ride, Brian. I was just watching an episode of "Aerial America" on Arizona yesterday and lo and behold the same areas they were showing was exactly what you saw and took pictures of! Glad you were enjoying your ride and the real thing!!