From Behind the Eyes of the Beholder...

or... the Cowboy calling the Townie judgmental... a variation of the pot calling the kettle black.

Take a walk in the Arizona desert with a small herd of travelers... and you'll likely get it all from; "Oh My God! This is beautiful" to my Grandfather's (an Ohio Farmer)  frowning derision; "What a bleak and barren wasteland!"


I can't but admit, the country is stark. It can bully and intimidate... as even I felt, standing beside my motorcycle on a high point along the highway deep in the Yukon. I was staggered by the awesome weight of the SPACE... Fearful and giggling happy, all at the same time.

The danger is to recoil from it... and many other things... and then spin your feelings into derision that you color other folks lives with. It's a danger to be guarded against... and one of which I know I am as guilty.

Stop and truly look... make sure you see... Before you render your judgement... and if you still feel the need to belittle and ridicule... go in the bathroom and look in that shiny square on the wall... you might have better luck finding the Real difficulty that way. ;)

A small example; I have, in the past, expressed my disregard for Class B rigs... A shot from the hip, unthinking criticism. Much like ridiculing another man's horse... that you've never ridden. In honesty, the only thing you Can say is; "It don't appeal to me." cuz in pure an' simple reality... 'thout walkin' a mile in their moccasins... you (or me) ain't truly got a clue!

Now... several years later... after having seen more than one person either living in a plain old cargo box trailer, with their possibles in a selection of rubbermaids or a TINY lil' RV... and seeing the lightness in which they live... I admire the quality of their characters, the power they exert over their egos... and the un-fettered Shining Times they can savor. I am often jealous... but try as I might, though I know it to be GOOD... I haven't been able to cut off nearly as much of the freight I carry as they.

I have chosen to deliberately pull in my horns and work a mite harder to see behind the eyes of a partic'lar Beholder before I bless the world with my personal variety of wisdom. ;) My intention being (In Most things) to contain my criticisms within the purr-am-uh-turs of either; "I don't get it... or ... it don't appeal to me.)

In respect to that... any "What the hell were they thinkin'?" comments you see here should be perceived as an "I don't get it" comment. ;) with the occasional lapse thrown in to keep my ego in check. (You can't totally stop the Wyoming wind neither!) ;) 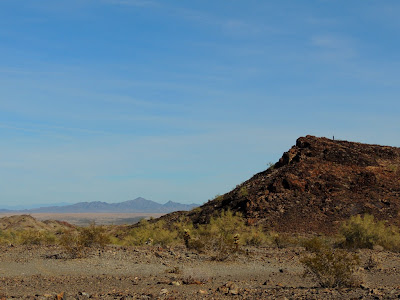 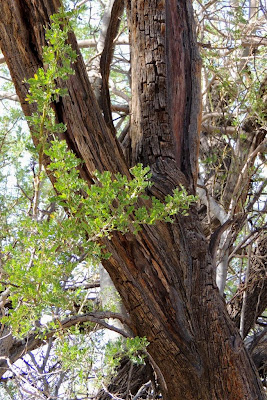 I'm constantly impressed with the refusal of life to quit tryin'. 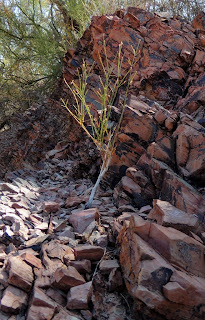 I can't hang a lot of hope on this lil' Paloverde's effort at prosperity. At maybe 6" tall, in this dry desert, its prospects are kinda lean, based on it's choice of locations... rising out of a solid bed of rock...

But... just the same, I'm not gonna go bettin' against it neither.

I remember a tree in Wyoming... It rises up out of a boulder sitting between the two sides of Interstate 80 a short drive west of Cheyenne.

That tree has been there as long as I can remember... and likely from before I was born... and will likely endure till past the time that I'm Coyote feed...

Or those Bristle Cone Pines on the mountainside behind our Red Canyon camp up in Utah. If you stop and let it rattle around inside your brain pan for a while, their struggles pretty much dwarf our difficulties don't they?

... and we have the luxury of pulling up our roots, literally! and moving on to seek our futures...

As I wander through this life I am slowly coming around to a conscious way of measuring what I and others do. I measure not by law or convention... but by the rule of Right and Proper.

What impact is what I do going to have on the land that supports me? Are my choices paid for by MY efforts or some sort of Barter? OR... by Taking from others. How do my words and actions color the world and the lives around me? I also apply that judgment to the actions of those around me... Do we seek balance... or Preference?

It's a revealing microscope to apply to life...

The Desert can be a land of humility
Brian