From Zion to Lake Mead and Back to the Kaibab

We hauled out of Zion late. We're late starters, but we make it up by being early stoppers! ;)

We found a night camp on the rim of some badlands "canyons" just a bit south/west of Overton, Nevada. 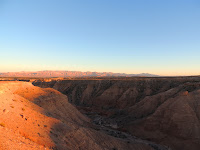 I think we may have gotten a bit prejudiced. After Zion and the Narrows... a lil' place like this looks more like a ditch. ;)

It does have its attributes though. One, it's Free! :) and two the quiet and space is precious to such as me, even with the first impression of bleak and barren; and as you'll soon see, bleak and barren isn't always as it appears...

We weren't the first by any stretch to find this place. The tip came from the campground host at south campground back in Zion...

Just a bit farther west of us, across one of the shallow canyons was where the more Elite folks set up. ;) Funny how it seems to work out that way... the six digit rigs tend to congregate in one area... and us lower level wanderers camp up in another. 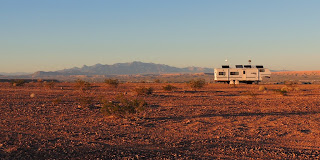 Though we might be less flush... most of the boondockers "Over here" seemed to be set up, maybe even a lil' better for long term camps... ;)

... No Matter your economic status... the sun rises over Free men just the same... 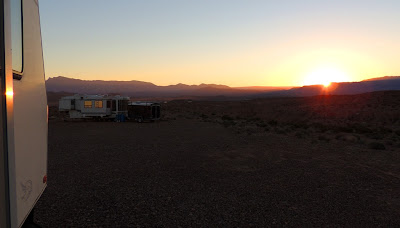 With the sunrise we continued our southern migration... passing by Lake Mead along the way.

Coming through the treeless expanse of the Mohave Desert... finding a few Palm trees poking up out of the rocks and sand is a little surprising... 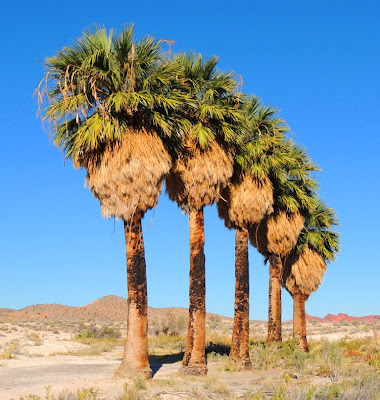 If I remember the name right, this is Blue Point Spring... Walking up to the oasis it surprised me to surprise a frog!

He'd been sitting by a clump of grass on the bank of the hidden stream. The grass was so thick that I could actually only see the water in one tiny spot (where I'd seen the frog jump). What's sweet though is to Hear the water gurgling in its stream bed... through this thirsty land... as it works its way through the grass. 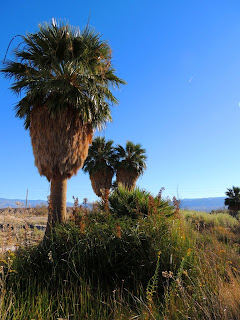 There was even one tiny lil' fish, maybe an inch and a half long swimming near the bank of that one small visible bit of water.

The amount of Life in these small lil' Oasis in the desert is pretty remarkable..

If you turn around and look back upstream, toward the head of the spring... 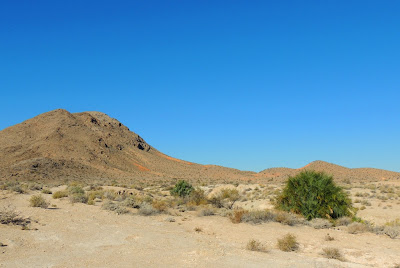 This doesn't exactly look like country you'd expect to find frogs and fish in... does it?

Looks can be deceiving... I suppose a fella should remember that...

Running a bit farther south... we got closer to the lake... and could clearly see how low it remains... The lake itself has been down for years...

... It's been dropping since 1997. Some of the cause is a bit of drought... though... in the Desert... it is ALWAYS drought. The folks planting lawns and golf courses don't seem to grasp that fact.

75% of San Diego's water comes from THIS lake... The guys running the show have already projected the HIGH likelihood of it going effectively dry in the next 30 to 40 years... The problem with the lake is not the weather... it's way too many people trying to drink out of it... and water lawns... where lawns were never intended...

I remember lots of folks having green yards in Tucson when I was a kid... They'd bought Green Gravel!

We continued on south past the Hoover Dam... Years ago we used to drive across it... now it's not visible over the concrete walls of the new bridge built to bypass traffic around it. You can go down another road and still take a tour I guess.

By mid afternoon we were back in our Kaibab Camp of previous years... or near to it...

You can just see the rig poking out of the Junipers in the lower right of the photo... We got there in plenty of time to take an afternoon walk through the neighborhood and renew acquaintances with some of the neighbors. 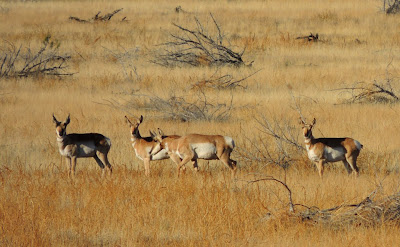 Farther on up the forest road was a mob of other locals... must have been over thirty in the area. They all appeared to be working their way NW at sunset. Must be a big roost area off there somewhere...


Curious buggers. One of 'em followed and buzzed Heidi and the dogs for a while the next day...

Kinda spooked her... Said she could hear his wings as he flew up behind them so low she thought she could reach up and pluck a feather...

Maybe if she had, he'd learn his manners! :)


We've been here for three nights now, and will pull out tomorrow morning, bound for Phoenix International Raceway... and a week of NASCAR, driving for dollars. ;) 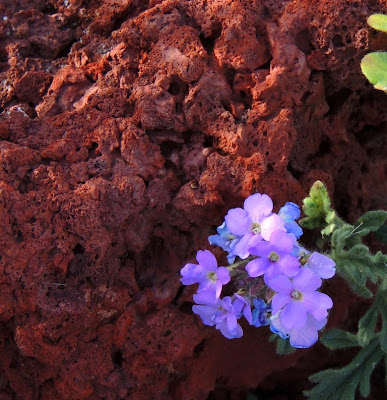 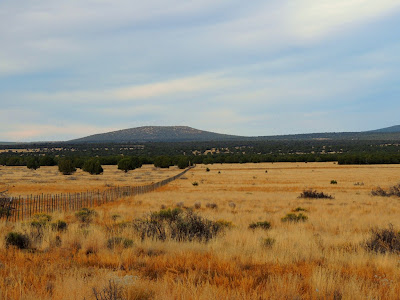 Pretty good yard for bein' Rent Free...ain't it? You can't get more Frugal than that! Like I've said... I can't think of a better way to be livin'... It works for me!

Boondocked on the Kaibab
Brian
Posted by Brian at 10:21 AM

Thanks so much for all the great information. Old Marine here...retired and trying to get up the courage to follow in your footsteps. I'm all alone but hardest part is being away from grandkids. I do have my 2 old dogs to travel with. Used to own a trailer...30'...when kids were young. Thinking now about a small trailer...just enough for me. Got any advice?

After crossing the new bridge in my RV in April, I took it back across the dam to the Arizona side so I could look at it. Details in my blog http://techno-viking.com/posts/hoover-dam/

Glad you got that camera thing under control. The pics are GREAT.
Plans are pretty sure for the next 13 or 14 months, but sometime in early '14, we will have to plan on a campfire get together.
Thanks for your generous advise and pointers along the way, we are 7 weeks into it and Life is great 'out here' FT.
Our little bit of dry camping showed us everything worked so Boondocking, here we come.....
Later Friend,

Great photos, CowBoy!!! Shoulda got that Nikon a long time ago...
Box Canyon

Moderate; Small is good! I'm still trying to figure out how to squeeze a fresh/smaller rig into our budget! Something you might consider is a decent Class C pulling a lil' toad like a Samurai. Best of both worlds... and you'd have a lil' runabout to poke around the backroads ;) ... or a scooter like me! :)

Blars; I'll have to check it out... one lil' thing. the URL to your blog? In the "Identity" list below... if you use the Name/URL option for your comments it'll make the Link to your Blog a Hyper link. Makes it easier for readers to check you out. Be My Guest Buddy!