Unexpected Good Fortune along the road to Zion

We had two good days on the North Rim, and there's no shortage of hikes or even rides but when I got up on that third morning... 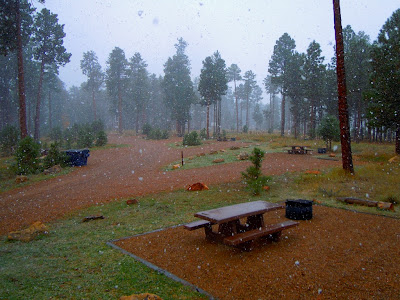 OK... it's time to point the radiator at a place where the rain ain't frozen! ;) So we rolled for Zion; where strange things started happening... like... luck of the positive sort!

To set the stage... this month "Things" are pretty much stretched as tight as they've ever been. Between the breaking equipment and thieves and such... our "larder" is 'bout as empty as it's ever been... so in the back of my head... lil' voices were havin' arguments 'bout what we should do and where we should be doin' it...

Well along the way we get a call from our accountant... that takes care of our taxes for that lil' store of ours... and tells us that all told... with last year's profits being the thinnest in a long time, and barely in the black... we'll get back nearly all of the tax money we paid in! Ha! We beat Romney's %... ha ha! How sweet is that?

Then... We pulled into the Walmart Parking lot in Hurricane, Utah mid afternoon Friday intending to spend the night. We didn't have a reservation in the Watchman Camp in Zion till Sunday night. As per usual, we was pretty much wingin' it!

I was sort of thinking if they didn't object real loud I'd try to do the plumbing repair out in a far corner of their parking lot...

Being already in the gate we had to pull on in to the parking lot out in front of South Camp to turn around; and being that far I said; "Long as we're here, let's just walk your dogs before we head back."

I opened the door and my foot had no sooner hit the ground and this guy (a camp host) was calling; "You looking for a campsite?" ... to which I replied... "welllllll......yeahhhhhhh."

Heidi squalls; "Get back in the truck and go! I'll walk down!" ... so we bumbled into a good dry camp site, and took a short walk to cool out.


After more frustration with the increasingly malfunctioning busted camera (all the others havin' been stolen) We ran back to Hurricane after we set up... I've thought about this six ways to a prune picker and decided; I NEED a good camera."

It's kind of like a plumber or a carpenter; They need their tools to make a living, so they need to take whatever punishment is required to have the tools they need.

A good and functioning camera is a big part of my blogs and websites... and them being a critical piece of our income... I NEED my tools! Soooo... I found a painful way to replace one of the cameras... and it's first blog pic is the Watchman just above... Life in the West... It's not always how you plan it. Sometimes Ya just do what ya gotta do.

I got a Nikon Coolpix P510 16.1MP Digital Camera with 42x Optical Zoom - (Google Affiliate Ad)... and THAT is another lil' bit of that Strange series of GOOD LUCKS we've been experiencing.

I went in to Walmart to get the camera as it was thirty bucks cheaper than at Best Buy... only... the  Hurricane store was sold out! Now that doesn't sound like Good Luck do it? ;) ... patience lil' ones...

The clerk there told me; "They'd most likely have one over in the Washington store."

and then... and THEN... and THEN! when we walked out the front door going back to the truck was THE most glorious sunset We've ever seen. 'course we didn't have a camera ready to capture it. ;) but the way the clouds were lit and fringed in pink, with the rays of the sun spreading out and framing the whole thing was absolutely Shining! and it only lasted for a few seconds... and we walked out at just the right moment to see it... a few people were scattered all across the lot holding their phones in the air... capturing the moment. :)

How could I look at that and bein' the superstitious buster I am, NOT see it as a GOOD Omen? ;)

Had a good supper in town to celebrate the weird flow of fortune (and stretch that wallet a lil' tighter!)... and went home... Got up the next morning to flat grey overcast that took most of the day to break up... makes it tough to get good photos... you generally have to focus on the smaller bits that eliminate that grey sky... 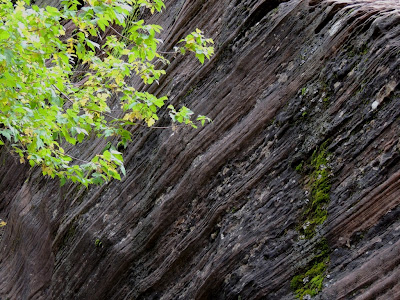 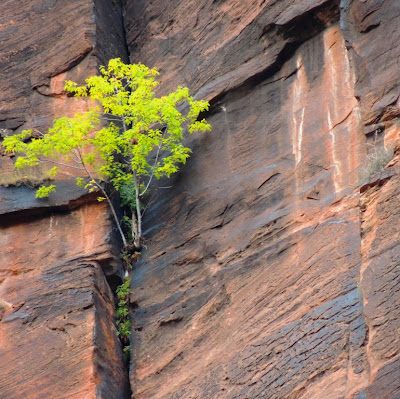 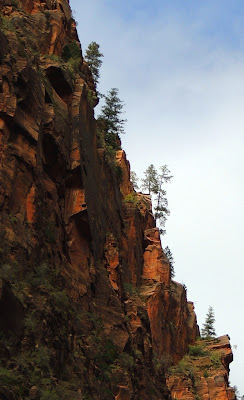 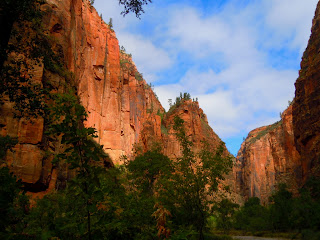 Then... in the afternoon yesterday I started tearing the belly apart... dreading what kind of ordeal I was gonna find... and found... MORE LUCK! :)

The break that I was fearing was on top of the grey tank was actually the same as the fault on the black tank a couple of years ago, only a lot less. Where the black tank had cracked, this is only a failure of the weld joint of the fittings... So... all I have to do is seal up that joint somehow and we are golden!

Well... that and repair the hole in the shower floor that I wallered out in Lee's Ferry... :) 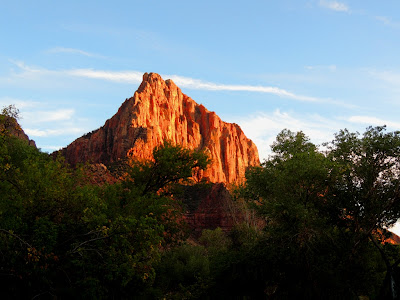 In the afternoon the clouds broke up... the sun came out and The Watchman lit up... Today I'll complete the repairs... or most of it... and get back to Shining Times!

Plumbing and Picture Making in Zion
Brian
Posted by Brian at 9:37 AM

Glad you got such a good camera deal. There's also a Real camera store in Washington City just past the Best Buy. I recently bought a tripod there.

Sorry to have missed you at the NR. But am sure you're now in a little warmer and dryer country.

Glad you got out of the frozen rain, and that things are going your way for a change. Love the pics with the new camera. Now chain that bugger up so it stays around for a while. LOL

I love reading your blog and am so happy for the positive turn you experienced. Isn't Zion just gorgeous. In our younger days,many moons ago,we camped out in an apple orchard in the Spring-I remember waking up to thousands of bees buzzing through the trees-unforgettable.

I'd be happy to contribute to your larder if I could just find your RV books on Amazon for my kindle.

Need something to inspire me while I'm stuck up here in Weld County.

Gaelyn; we'll catch you next time... and Zion is nice and warm ;) though I've been spending my time under the rig trying to plug leaks :)

Sharlotte; I tried to chain it. But that big ol' loggin' chain is kinda awkward to get pushed through those tiny lil' strap loops!

Roadtrek Girl; camped in an Apple Orchard in Zion? There's one just west of town, but no campground there... but I wonder, could that memory be from the Orchard right beside the campground up in capital reef?... if you stayed there on the same trip?

Bill; Thanks Bill. I'm workin' on it! :) I gotta do an edit on those lil' books before I put 'em up on Amazon... and I'm trying to work on a "Goodlife II" volume. I wonder... I email my manuscripts to my own kindle as part of my editing process. I wonder if you could download a book at Smashwords to a laptop in pdf format or something like... and then email it to your kindle? Kind of left handed... but it might work? Not sure who you could check with on that. Hope your difficulties get healed up pretty soon for you!

Thanks Brien I'll keep checking on them at Amazon.