Another Day Along the North Rim

A storm was threatening... and the rain actually started in Jacob Lake 'fore we got our slow movin' selves out the door. I'd thought of droppin' the bike on the ground and doing our second tour on it...

With chilly temps and rain spittin'... I wussed out and left Sonja on the truck... and made another 4 wheel run south onto the North Rim. 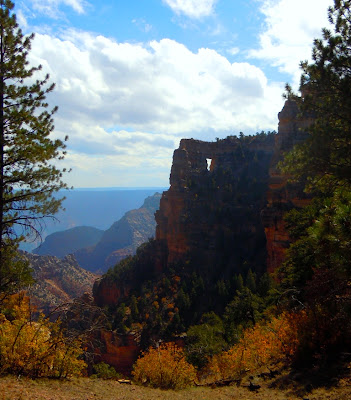 When you get to a lil' different position you can look through that hole in the rock and see the Colorado River some 8 or 10 miles away... leastways it's that far if you can fly... I expect it's 15 or better by foot.

Breaks in the clouds came every little bit... It's real pleasant leaning on the rail gazing off into the depths of the canyon ~ when the sun is shining... Gets a bit cool in that Arizona breeze when Sol hides behind a cloud and the rain is spittin' at ya. 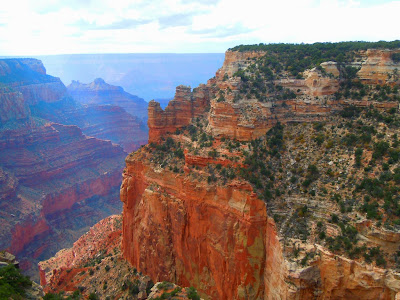 I didn't keep track of the mileage... but it's 30 miles or so I guess to the turn off toward Imperial point... then another few miles to the split where you cut off to Cape Royal. From there it's 15 miles out to the end of the road.

It pretty much sits over against the south wall of the Grand Canyon. 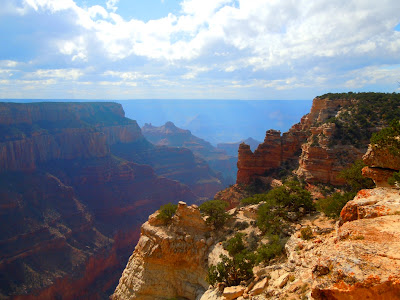 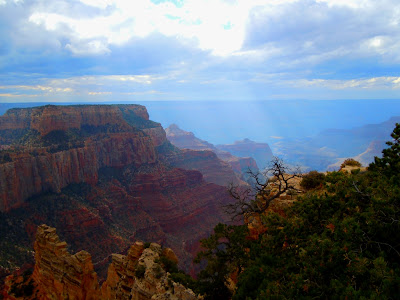 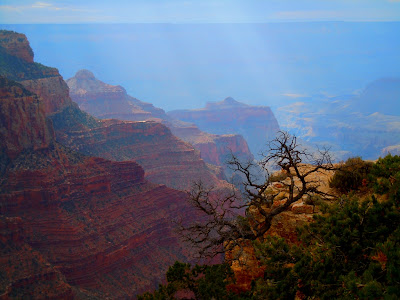 Sometimes I have a hard time choosing 'tween the big picture and the tighter shot... Just look at the one you like the most! ;)

We took the stuff to utilize some of the facilities at the General Store at the campground inside the park.

I've another job ahead of me... somewhere up inside the belly of this old rig the waste pipe from the kitchen sink has fractured so we can't do dishes... and... thinking that the leak was actually the 'temporary' fix I did on the shower floor failing, I started tearing it apart for a rework in the camp at Lee's Ferry... Only to discover that the real fault lies buried in the belly of the beast

But, for a buck fifty they've got HOT showers with strong pressure at the campground; we took advantage of that before starting back. And after your hot shower you can walk down through the timber and sit and soak up the quiet of the surrounding forest on the porch of the General Store with a cup of pretty decent coffee! 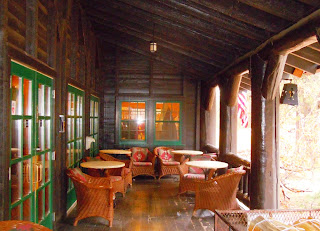 The clouds kept getting heavier and heavier with the breaks fewer and farther between as the day went on... Until it finally went to pretty much straight rain on the drive back north to camp. 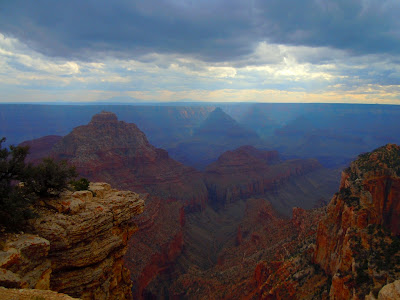 We did make one stop along the way... to see if we could spot the river through the hole in the rock... 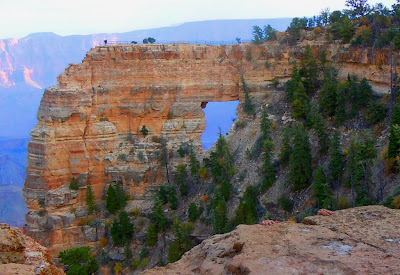 The rain came along pretty strong last night but this morning the sun is working at breaking out again. With another day or so of crawling around under the belly doing repairs ahead of me, and good weather threatening ~ we're gonna pull out today and run on down to Hurricane Utah...

See if maybe I can get a jump on that work before we get to Zion... or at least try to make sure I've got parts to do the repairs... when the Rangers ain't lookin'...

...If only Walmart will allow me to crawl around under the rig in their parking lot. :)

The life of a drifting gypsy ain't all roses.
Brian
Posted by Brian at 9:47 AM

Luv walkin around near Angels Window, lots of good memories there. Here at Mesa Verde this morning we got your rain plus some. We had a hail storm at 10:30 this morning, I need to get outside and hope that there is not damage to the rig.

The pictures are beautiful. Keep them coming.

I like the last picture. BTW who is doing the hang-ten off the rock ledge? A cowboy we all know maybe?

Be thankful you're not here today in the snow. Good luck with repairs in Hurricane.