Turned West for Zion and Landed in the Grand Canyon

It took us a bit of time to work down out of Bandelier National Monument. Not being in a hurry to get anywhere that generally don't make much of a problem.

We'd gone up to Los Alamos the day before... I ran out of beer! and ya do what ya gotta do! :) That's a curious town. You have to pass through an inspection gate to get in or out... It is for all intents and purposes a military installation.

Once you're in... it really is a drab lil' place... Even though there's Salon Names and clothing store signs hanging on the buildings... the buildings look like they came straight off Fort Lewis or Fort Knox... or just about any other army post.

The real curious or funny part to me is that, though the place looks pretty low end, or poor by most measures... stand in the grocery store parking lot and look around. Try to find a car that ISN'T a Lexus, a BMW, a Volvo...  :) Then you realize that just about ever'body here is either a masters degree'd grad of MIT or some other... or the son/wife/daughter/husband! of somebody who is. :)

Funniest thing to me was this one partic'lar young fella sportin' the Big Hat, boots and jeans pushin' a cart inside. Made me giggle... those boots hadn't ever been within three hundred yards of any cow flop; and You could See the degrees hangin' on the wall behind his desk... But... when you're in New Mexico... ya gotta get Western ~ right? :)


We pulled out of the juniper campground and climbed the steep slope up into the Valles Caldera.

They say this big valley is the caldera of an ancient and huge volcano... when that thing blew it pumped 200 CUBIC MILES!!! of ash and rock into the sky... CUBIC MILES!!!


That puts it, 'cording to their cipherin' at 500 times the size of the Mt. St Helens thumper... kinda dwarfs Ethel sprayin' her hair spray and changin' the climate don't it? ;)

It used to be a big ranch for several generations but somehow now it's been turned into a "preserve".

But, bound for the west we dropped down out of the mountains to drop south through Albuquerque and take a little different route to Zion by way of I-40. We'd planned on going to Chaco... but... a friend asked "were we going to Zion" to which we replied; "Uh Huh"...

Well, the upstart was to be there when she could get off work didn't allow the time for Chaco... so that preserves one more place we've never been... but that's ok... 'cause we determined that The North Rim of the Grand Canyon had somehow escaped our travels for all these years too... so we'd put a check mark side of it as we rolled by.

We'd tried to come here several times in the last few years... we were always too early and the road from Jacob Lake wasn't open yet... or too late and it was already closed. It's 'bout 8900 feet here so winter stays late and returns early.

But... to get here we had to make an overnight in Winslow... Ok... trying to be nice here... but I gotta say... Spend a night in the Winslow Walmart lot and you'll get a perspective on another slice of life... Yup... watching drunk Indians whup up on each other beside the dumpster where they have apparently taken up residence is... uhhhhh ... enlightening maybe to some people?

Having spent a pretty good chunk of my life growing up and cowboyin' in Arizona it was no surprise... but it's not something to really shine up a day...

So I fired up the tired Ol' Dodge and kept rolling west. Turned north at Flagstaff bound for an overnight at a favorite spot of ours; Lee's Ferry on the Colorado River.

Now here's a lil' trip advice... take your time running that goat path 'tween Flagg and Lee's Ferry or Page... The Alaskan Highway is a far better road than that piece of Arizona asphalt junk... it's a humped up, hitch bending, shock blowing butt thumpin' two lane trip if you're pushing too hard. ;) 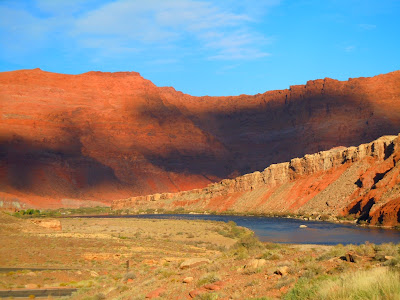 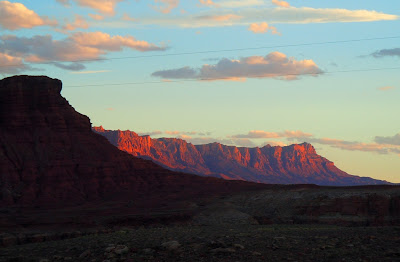 The place will quickly wash away the hammering you took on the road... It's another of those Healing Places that just quiets the noise inside your head.

and... There's something... different ... about most of the people who use this camp. They're more relaxed, more friendly, more... down to earth somehow.

The rigs you see here run from tents to cargo trailer "campers"... the world traveling, VW van Adventure rig we say here out last visit... to fivers and such... but all with the same... low key, easy way about 'em... it's just a nice camp. I think if we didn't feel some pressure to get to the North Rim... before it closes on us... again! We'd have stayed here longer... that and I gotta get to a town in southern Utah... to find some more parts... for some more plumbing repairs... :) I'm thinkin' that water rollin' out of the belly of the rig ever' time she does dishes is something that might could need attention?

At the North Rim you've got four choices... Two forest service camgrounds; Demotte camp 'bout 23 miles north of the park and Jacob Lake camp 41 miles north. Then there is a Park Service campground right down near the visitor center inside the park.

I opted for the Jacob Lake camp as it had some open spots when we rolled by, and I'd no idea of those miles south. Figured if the weather holds we'll roll the bike... That and I've got signal to spin my yarns here! 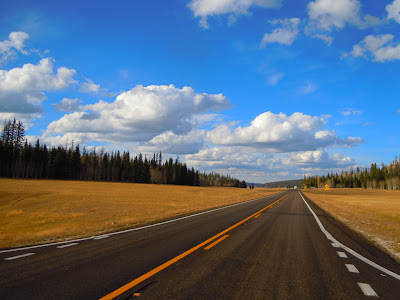 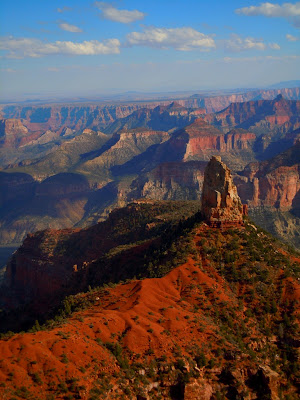 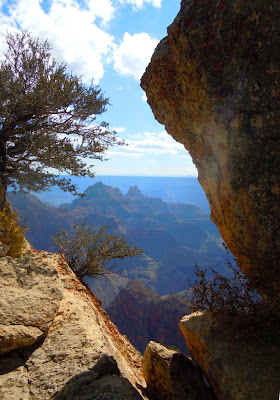 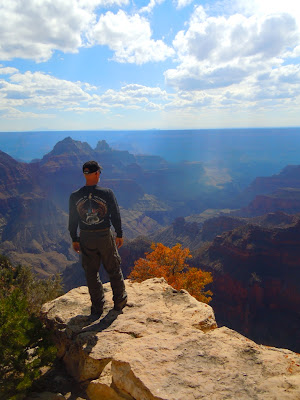 Like the German fella I passed said; "It's always better on the edge isn't it?" :) 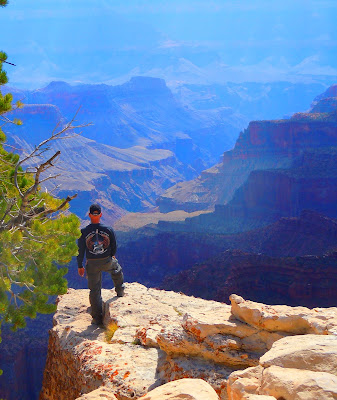 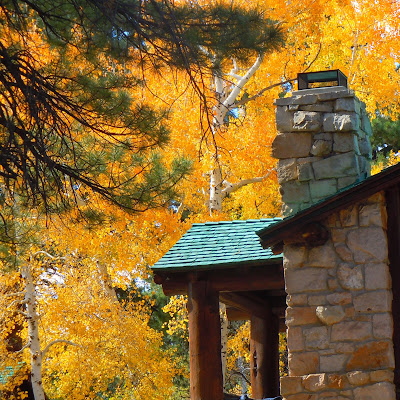 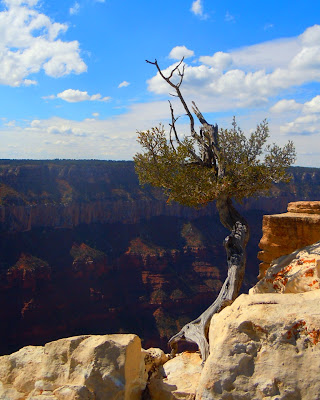 At Point Imperial we could look back to the north east and see the Vermillion cliffs we'd passed earlier in the day... 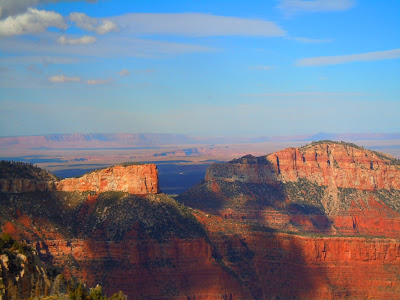 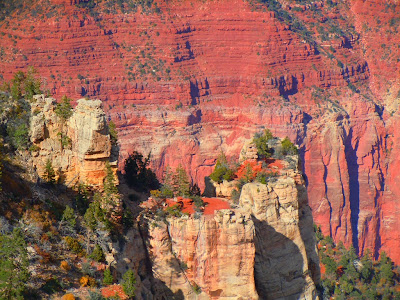 Just above the Visitor center/Lodge area are a couple of nice spots for a pik nik lunch... Nice place to sit in the sun and take a break for a bit. 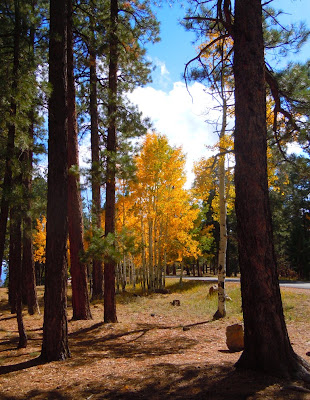 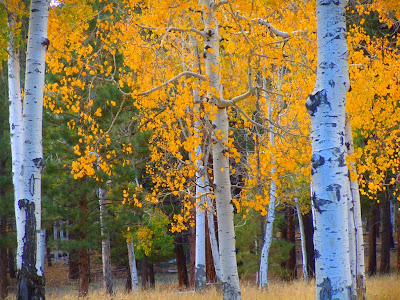 Now, today the weather is rollin' in... I may just wuss out and leave the bike loaded... What with some cool temps and rain expected... I'm not sure I'm feelin' it to run the bike down, no matter how purty that road is... It's so much sweeter in the sun! ;) I must be gettin' old. :)

We've only got a day of this weather... so we may still get in a scoot before we have to roll for Zion...

I can say that as lightly travelled as the North Rim is compared to the south... We will be coming back here for a long camp some time. This side of the Canyon is prettier to my mind and there's a lot of hiking and riding to be done!

Free on the Earth
Brian
Posted by Brian at 9:13 AM

Did you see Fab Grandma at the gate as you went in? Or GeoGypsy at the Center, both ladies write wonderful blogs? a. in Flagstaff

If I'd a known you was a comin' I'd have baked you a cake.

Anon; Nope :) only a guy at the gate and a
lady ranger way to young to be a grandma of any variety ;)

Gaelyn; we've pretty much been wingin it. In Jacob lake now. Have to haul in the morning to track down parts for another plumbing fix :)

Linda and I both like the North Rim better than the busy South Rim.

Been there a few time and am looking forward to getting back there again one of these days.

Oh no, not another leak!

Brian, we're like you, always wantin to see the N Rim but never have. You've re-kindled that fire. Gonna do our best to get there next summer. Thanks for the glorious pics!