Blogging ~ is Photography ~ is Life...

A couple of small things happened that got me wonderin' 'bout things again...

You know how so many curse Walmart? They do this to people they do that to their employees... and how Walmart customers are... uh... less than Shiny folks? (as in the people of Walmart pics?) yadda yadda yadda? I've wrote before about Wally World.

I worked for a company where it was part of their mgmt. philosophy that they'd curse Walmart and how poorly they treated their employees... and this from a company that paid a starting wage a full two bucks below what Wally did... offered FAR lower benefits... and fired folks on a whim and a LIE if they didn't like your socks!

So... yesterday Heidi went in to Steamboat to run some errands. She did some shopping at Walmart and asked could she write her check for twenty over to get some cash? Well, the cashier punched a button wrong... "Oh Crap, I forgot the cash over"... Heidi'd been given the wrong total and she hadn't caught it either so the check was made out for only the purchase...

Well... it was Heidi's last check. She asked wasn't their a way they could run it off her debit card or whatever, she didn't have another check... they said no there wasn't. Then the cashier said; "Wait a moment" and went to talk to some supervisor...

The upstart is... they came over and handed her a twenty dollar bill!!! Heidi said; "You can't do that! I'm not comfortable with it!" They said; "It was our mistake. That is how we're going to fix it. That is YOURS!"

And THAT my friends is how One corporation treated us. Put that on top of the anonymous Person of Walmart ( a few weeks ago) who took my high dollar smart phone that had got left laying on the bed of the truck and dropped it through the window... and I CAN'T HEAR all the noise about how bad Walmart is. Sure, they play hardball when it comes to business to business...but from what I've seen... I can't criticize too much. Nobody is perfect.

While she was doing that I was doing a little work updating and 'house cleaning' on the main GRVB website. I replaced the Home Page photos, worked on the text a bit, changed the background color, tinkered with the Nav Bar... yadda yadda yadda... just trying to spruce things up a touch...

I was already thinking about how much trouble I've had lately trying to capture photographs that seemed fresh and new... Then she got back and told me about her lil' experience...

It all seemed to come clear... once again... Though the BIG things are spectacular at times... to expect that each day is unsustainable. It's the small, close up, every day little things that you can count on... IF... you watch for 'em.

We'd taken a hike in the morning, circling the lake bed. I'd been displeased 'cause I couldn't seem to capture the sort of photos that GRAB you just plain old pretty scenes... DOH!... for a short bit I was ignoring my own counsel... 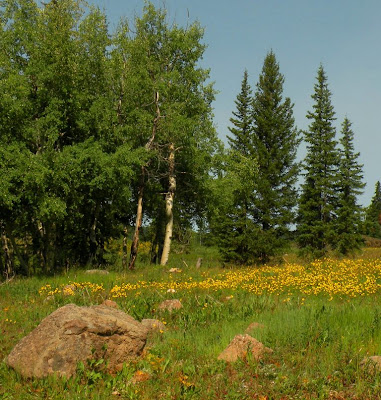 The spectacular becomes mundane if you expect that every day. It becomes frustrating when you fail to it find it every day, and you Won't. It's the simple scenes that are the "meat" that carry you through each day. The small kindnesses, the soft breezes, the quiet word... the simple pleasures.

You don't need to be climbing Kilimanjaro to find adventure... It's right there down the trail... 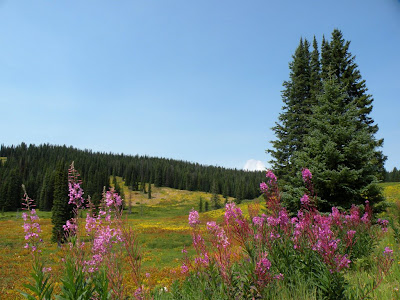 Can you see it? Right there between the fireweed blooms?... 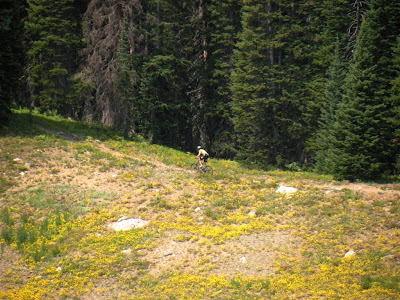 Three "Bikers" passed us on the trail after we'd come around from behind the Beaver pond... 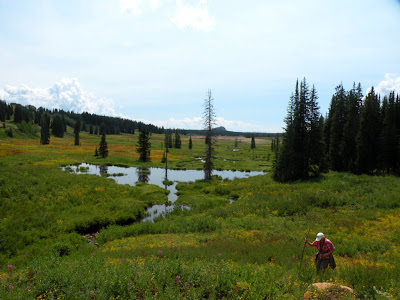 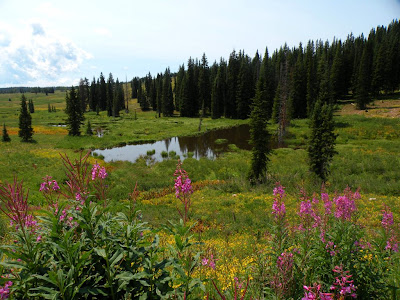 ... From where we'd "Bushwhacked around the west side of the currently empty Dumont lake... and climbed back up to the trail... They forded the stream farther up and then put their backs into muscling their mountain bikes up the slope behind... They were headed all the way to Steamboat... over the mountain.

To come up with something fresh and new to write about is sometimes a struggle. It feels at times like everything has been said... yet understanding is sure not yet universal... so there is always another "angle" to be presented and explored... if a guy can just find the words hidden in the tangle of ideas rattling around in a jumbled brain pan. 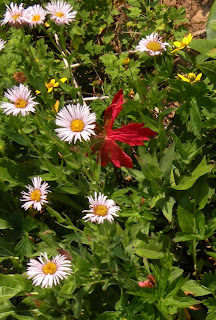 You want to keep the "Big Picture" view around for sure... but it's best to leave it pretty fuzzy...

The FOCUS needs to be on the next step or two... Only.

The close up detail is what needs to be clear and sharp... Where you're going to "Set your foot down on that next step"...

Just give the steps after that time to come into focus in their own time.

Let the Horizon remain fading off into the mysterious blue haze of distance.

Like in photography. Sometimes THE photograph isn't that Grand Horizon view... Sometimes its' the small, simple little picture... right beside your boot.

I get lost in that Grand Horizon a lot... and have to consciously force myself back to focusing on not putting my foot down on that bit of gravel... on bald rock... of a slippery slope...

Getting to that Grand Horizon isn't gonna happen... if I fall off the mountain, 'cause I failed to pay heed to the small bits along the way. 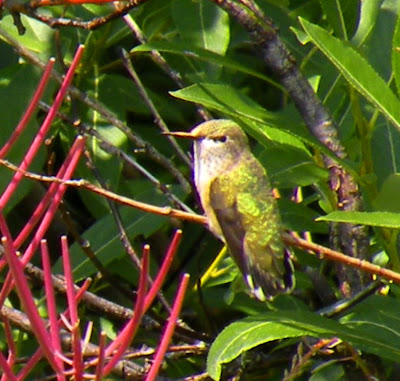 Keep Your Eyes on the Prize... but Focus on the small pleasures and beauty along the way... "you'll get a more harmonious outcome!" ;)

Working hard to learn how to play my personal "Harmonioum" ;)
Brian
Posted by Brian at 11:19 AM

Well Brian you may at times have trouble putting the words down on paper or whatever you call it these days but keep on doin' it. At the end of the day I find it enjoyable to check in and see what you have been up to.

Really like all the tinkering you been doing in the web site. First thing I noticed when I clicked obit yesterday. Love the pictures.